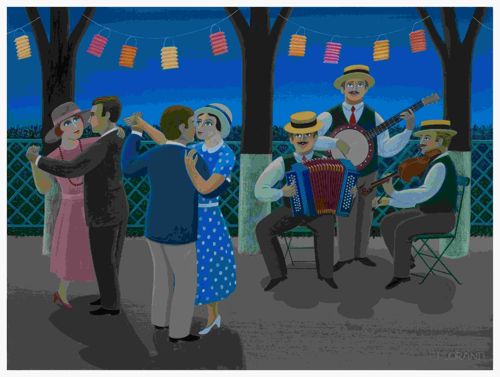 AS the warmer weather approaches, you are very likely tol see ‘Bal-musette’ advertised around the region – particularly in the summer.

It is a style of French popular music which arose in 1880s Paris, especially the 5th, 11th and 12th districts.

It was in these districts that Auvergnats settled in large numbers in the 19th century, opening cafés and bars where patrons danced the bourrée to the accompaniment of a musette (a bellows-powered bagpipe) and grelottière. In addition to the local Auvergnats, these drew many Parisians and Italians.

When Italian musicians began to appear more frequently, along with new dances like the waltz and polka and a new hybrid accordion, a conflict arose, and Italian and Auvergnat musicians became segregated. The Italian establishments went on to much fame and prestige.

By the end of the war, there were three kinds of bals-musette:
– bal des familles (Auvergnat)
– bal musette populaite’ (Italian)
– guinche (seedy hangout for crooks) The French upper-class began frequenting these establishments, looking for excitement among the poor and downtrodden. Some staged mock police raids for their benefit.

New musical forms like jazz and tango left their mark on bal-musette following the war, and dances like the waltz, mazurka, paso-doble, beguine, foxtrot and java spread through Paris. Later, new instruments were added, including the banjo, clarinet, trumpet, saxophone, mandolin and bandoneon.
It was in about 1945 that musette became the most popular kind of French music. Its biggest stars were known across the country until about 1960, when its popularity declined drastically.
Info taken from wikipedia .