“Get off the rails!”

“The female orange porters of the Red Trade Union have invaded the station of Cerbère and are lying on the rails.”
[Telegram from the préfet of Perpignan, M. Dautresme, to the Minister of the Interior, 29 November 1906] 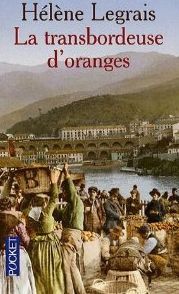 Basil Howitt delves into the first ever female strike in France, as related in a superb historical novel based on it, ‘La transbordeuse d’oranges’ by Hélène Legrais

If you like reading weepy love stories you will not be able to put this book down. Likewise if you are hooked on steam trains.

And if both weepies and steam engines are to your taste in a context of some meticulously researched social history, you might, if your French is reasonable, be able gobble up this short historical novel in a single session.

The context is Cerbère in the year 1906 – the year of the first ever women’s strike in France. I won’t reveal the star-crossed lovers’ story here, except to say that it has all the heartbreaking outcomes of a tragedy worthy of Corneille or Shakespeare.

The only precedent I have found for an all-female strike was in 1888 in Bow, London, when 1,400 Match Girls walked out at the Bryant and May factory in protest against poor pay and unhealthy working conditions.

Before that, the notion of women on strike belongs more to the realm of legend than hard fact. In 411 BC the Greek dramatist Aristophanes presented a comic account of how his heroine Lysistrata attempted to put an end to the Peloponnesian War by persuading the women of Athens to withhold “sexual privileges” from their husbands until the fighting ended. 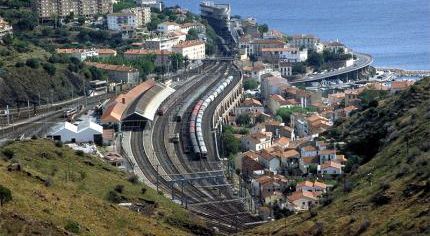 The exponential growth of Cerbère from this point was due to an accident of history. As many people are now aware, the railway gauge in Spain and Portugal has always been wider than in the rest of Europe: 1668 mm as against 1436 mm. The reason for the wider gauge on the Iberian peninsula was to allow larger engines to travel safely in a mountainous country – rather than, as is often claimed, to prevent French invasions by rail!

This meant that passengers crossing the frontier had to change trains, and freight had to be shifted manually from Spanish to French wagons and vice versa. A new and vast service sector thus developed, including customs and police personnel, transitaires or freight forwarding agents, postal and telegraph workers, accommodation for transient workers – and even a maison close, given the excess of men over women!

Cerbère’s international community included Majorcans, Spaniards, Portuguese and Italians. They had all been attracted by the work opportunities – especially in building the huge viaduct into the station, still imposing to this day. It is 20 metres high, 550 metres long, and is supported by 2 rows of 24 arches, each 8 metres high. Not as spectacular, however, as the well-known Stockport viaduct at nearly double the height (38.5 metres).

Such was the growth of Cerbère that in 1888 it was given the status of an independent commune, having until then been an outpost of Banyuls. The new commune had more telephone lines than any other town in the P.-O. except Perpignan.

Easily the most significant imports from Spain in these early days were Valencian and navel oranges brought by train from Murcia and Valencia to Cerbère. The delivery season began in November, climaxed towards Christmas, and ended in May. After being transferred from Spanish wagons to French ones, the oranges were shipped all over Europe and beyond – as far as Russia and Hungary.

The transfer of the oranges was a delicate matter for which women were considered to be more suitable: rough handling could easily cause bruising and rotting. And, of course, women could be paid a lot less than men!

They hired the transbordeuses – around 250-300 at this time – on a casual basis. The women worked in teams of 5. Three remplisseuses loaded the oranges from the Spanish wagons into baskets or couffes. Then one passeuse carried the couffe, weighing up to 20 kilos, across a narrow passerelle or bridging plank and handed it to a videuse who loaded the French wagon.

This was the delicate part. Three layers of oranges were laid on a multiple bed: straw at the base surmounted by two layers of cardboard, another layer of paper and a laize or band of secured paper. Above the third layer of oranges the foundation layers were repeated atop – paper, cardboard and straw.

Valencian oranges were loaded on one side of the wagon, navels on the other. The whole packing process was carried out “with as much care as a box of candies”. And all this, during the peak season, for up to 11 hours a day and often well into the night – sometimes in very cold weather and with no electric lighting.

As you would expect the piece-work pay for this backbreaking work was pathetic – but far better than anything else women could earn elsewhere, either skivvying in private houses or working in the fields. Each transbordeuse was paid 75 centimes per wagon load of 10 tonnes shifted, with the team leader getting an extra 25 centimes. Payments were made every fortnight, during which each team might transfer 18 wagon loads, thus enabling each transbordeuse to collect 13 francs 50 centimes and the leader 18 francs.

There was no sick pay nor injury pay – as there was for the foremen, train mechanics, drivers, chauffeurs, pointsmen, lampmen et al who got free health care and half pay when sick.
Enough is enough!

The more militant women, hardened physically and mentally by the backbreaking work, decided it was time for a very modest payrise of 25 centimes per wagonload. A strike was called on 26 February 1906 in which 200 voted in favour and 50 against – the antis mainly being those married to men who didn’t want the boat to be rocked.

The strike was effective, with only 29 wagons of oranges being cleared out of 104. At a crowded meeting in the Mairie a representative of the transitaires gave in with minimum good grace: “You can have your five sous (= 25 centimes) – now go.”

Alas the conflict was far from over when work resumed in the autumn of this same year. The “red” SPT found that the “yellow” women (Syndicat des jaunes) who had signed a no-strike agreement with the managements were given preference in the pecking order for work allocation. On 2 October, another strike by the 180 reds from the total workforce of 300 meant that oranges were rotting in the wagons, and the transitaires were forced to consider importing labour from further afield on both sides of the border: Banyuls, Port-Vendres, Collioure, Portbou, Llansa and Coléra.

Bring in the troops

The dispute exploded when the reds blocked access to the station by the yellows. Enter by night train the 24th Colonial (Senegalese) Infantry Regiment: 160 men from 2 companies. There was violence on both sides. Women were injured by rifle butts and retaliated with biting, scratching and kicking. “A smell of powder, dust and blood that caught the throat floated in the air.”
Martyrdom

On 29th November several women lay down on the railway line ready to be reduced to pulp by a Pacific engine leading a trainload of workers from Banyuls. Fortunately, due to the strength and skill of the legendary engine driver Fajal, the train stopped just in time – with a mere 2 metres to spare.

After spending the night in empty wagons, the women retreated to the track beneath the bogies. In the presence of the préfet, the soldiers tried to drag them out by their skirts, their sleeves or even their hair. In the end some women had to be flushed out – “blinded, soaked and shivering” – by “liquid spears” from pressure hoses.

The préfet insisted on an agreement between the reds and the transitaires. In the final “accord” reached on 3rd December, the reds were given equal preference for work, and also paid an extra 5 centimes per wagon load. Work was resumed on 5th December.