Apart from the well known Mardi Gras, the nearest French equivalent to Pancake Day is the ‘Fête de la Chandeleur’ (Candlemas), also known as ’Fête de la Lumière’, and even the literal translation of ‘jour des crêpes’ in some French speaking countries. 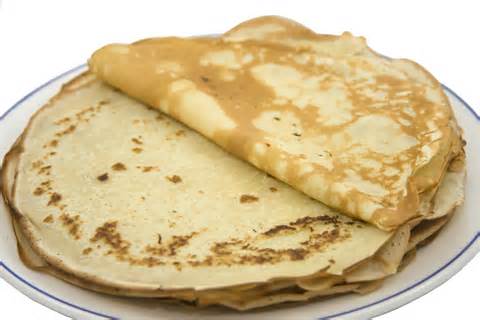 Originally a religious festival dating back to Roman times, the ‘Fête de la Chandeleur’ celebrates the presentation of Jesus, and marks the end of the Christmas season.

It is celebrated 40 days after Christmas on the 2nd February, and has many proverbs and superstitions surrounding it.

One tradition was to light a candle in the church and carry it home without the flame going out. If you managed it, this meant that you would not pop your clogs in the coming year.
‘Celui qui la rapporte chez lui allumée. Pour sûr ne mourra pas dans l’année’

To ensure that the crop would be plentiful for the coming year, it was an absolute must to eat pancakes.
‘Si point ne veut de blé charbonneux Mange des crêpes à la Chandeleur’

If the elected tosser could flip a crêpe with one hand whilst holding a gold coin in the other, the family was assured of prosperity throughout the coming year.

Finally…. time to talk about the weather.
Quand il pleut pour la Chandeleur, il pleut pendant quarante jours.
If it rains at Candlemas, it will continue to rain for 40 days

….or here’s another  which tells us the opposite!

Hmmmm, a little bit contradictory, but it is from this day that the days start to grow longer, evenings slowly grow lighter, and our thoughts turn to springtime.