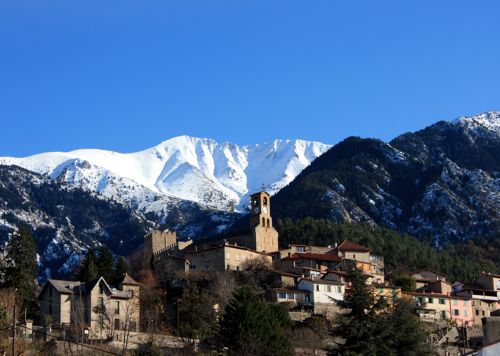 Driving up from the Vaubanian stronghold of Villefranche, past the caves and the less than noteworthy village of Corneilla, the discerning driver will come to a small town. On the right, rising up above a distinctly rocky river, there appears into view a somewhat non-descript building with the words ‘LES THERMES’ writ large on its Eastern Wall. This is the clue to where we now are.

Vernet-les Bains is, as its name suggests, a spa town. It finds itself on the slopes of the Canigou often wondering why it is so much colder up there than in the Conflent valley below. But it has a rather special history. The locals had always known that their water had healing qualities. If they had warts or piles or had been a bit heavy on the mead the previous evening, they would pop up the road for mug of mountain-fresh hot spring water and after a few days all would be well again healthwise. In medieval times, the monks from the Abbey of St Martin nearby were the unchallenged owners of the spring, and they used it as a marketing tool for their own brand label of Christianity.  A sort of ‘drink our water and feel the spirit – it’s holier than the competition at Molitg across the valley’ campaign. This lasted unchanged for centuries until the populace gradually cottoned on to the dodge, or improved communications enabled them to cross the valley to Molitg to test the thesis.

But it is this water, and the medical infrastructure built up around it, that is the source of the town’s prosperity.  Over the centuries the number of sources multiplied from one to many and the size of the buildings around them escalated from a stone hut to a facility which offered 100s of patients swimming pools, personal bathtubs, over and under-water massage (one hesitates to guess what the latter actually entailed), steam rooms, seated bathing  and pulverisation chambers (possibly cribbed from the Gestapo manual when they were operating in the region during the second world war).

The progenitor of this expansion was a 19th century rich banker (who else), who also funded the provision of hotels, doctors , attendants and tender loving care. The rich and famous flocked to the sanatorium for their daily dose of health-giving torture. Inevitably, the venture was a great success and the banker became even richer. .
Vernet is also the only place in France with a monument to celebrate the Entente Cordiale, which is precisely one more than there is in the rest of Europe, including the UK, thus demonstrating the extent of the treaty’s popularity among the peoples of the time. More about this later.

Vernet’s heyday was in the years before and after the turn into the 20th century. English Lords and Ladies, Minor and Major Royals, retired Generals and wealthy and impecunious poets descended annually to the town winter and summer, mostly the former. It became an outpost of the British Empire where the sun never sets and the natives know their place, and are eternally grateful for having it frequently pointed out to them. Forelock time in the sun.

During the day the thermal springs would dispense hope and hot water to the aristocratic guests, and in the evening the tables of the Vernet Casino would   dispense with their considerable proportion of the British Gross National Product. This was a time of great optimism and prosperity, for the visitors at least. La Belle Epoch, when ladies bustled through the town in colourful costumes and gaudy parasols and the men wore bowler hats and prominent moustaches.  The town basked in a riot of confidence and cheerfulness.

Into this hedonistic, pleasure-seeking milieu rode the writer and poet , Rudyard Kipling like the intellectual cavalry, he of the jungle book and despatches from India.  His wife, Carrie, was stricken with arthritis and a Swiss Medicine man had recommended the sulphurous waters of Vernet les Bains.  Although he never inhabited Vernet permanently, his influence is indelibly imprinted upon the urban psyche of the town.

Until recently there was an annual Kipling Festival, when every nook and cranny that the great man visited would be celebrated in song and word.  The Town Council has not yet considered whether to rename it Kipling les Bains, but its economy has owed a hefty slice of its income to his name. That this is diminishing is probably due to the fact that most of Europe and three quarters of the modern-day Brits who come here believe that the Jungle book was written by Walt Disney, and that Kipling is a baker who markets cakes and buns.

The case of the lost church 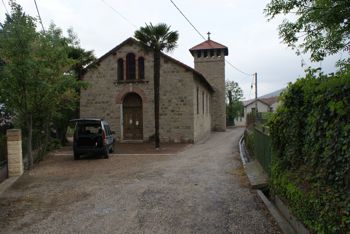 It was a time when, if anything typically British was in short supply, it would be provided by subscription from the wealthy visitors. The afore-mentioned unique 1904 monument to the Entente Cordiale is one rather strange example. Another is St Georges Church.

They were having nothing of the Catholic hegemony in their town. Anglicanism was a glaring omission from the cultural and religious landscape, and by jove and Lord Roberts, it would be rectified. Princess Beatrice of Battenberg, (the royal not the cake – and not baked by Mr Kipling) sister to the recently deceased ruling monarch, Edward VII,  forked out £3000 into the fund to set the ball rolling, while Rudyard did his bit by supporting the fund-raising effort , contributing some of his own booty and pressuring others to play the white man.  Since being pressured by Kipling was something akin to having one’s fingernails extracted one by one, enough loot was raised quite quickly to build a small church.

The foundation stone was laid in 1911 by no less a personage than Field Marshal Lord Roberts, the holy building work was completed in 1913 and the first liturgy took place in February 1914, a few months before Gavrilo Princip assassinated the Archduke Ferdinand and the cosy Edwardian, now Georgian, world blew up. Such is the irony of history. It laughs scornfully at our feeble attempts to create certainty in an inherently unstable world and, like golf, slaps us in the face just when we think we have got everything sorted.
Because of the carnage taking place elsewhere in Europe, the Brits left in their droves to make sure that they wouldn’t miss out. St Georges began its long decline until it was rediscovered in 2005 by Donald Blevins. That story is now enshrined in these pages under the title of  ‘The Vicar’s Tale. ’ I recommend it. It makes interesting and poignant reading. (to follow)

The present day Vernet is a pleasant place to live and to visit. The luxurious villas constructed by its illustrious visitors are still around, though in need of some repair. The Casino still takes its income from those who haven’t worked out, or don’t care about, the odds of winning, and the Hotel du Portugal next door accommodates the great and the good at great and good prices.  The Thermes still administer well-being and face-packs to the afflicted and massage the money from the well-heeled .The descendants of the swans in the park below still hiss at the children who come too close. The centre of the town is a pretty place to rest one’s daily burden in the open air cafes  and the view of the Canigou is resplendent.  The sun still shines down for 300 days in the year radiating goodwill and bonhomie on the people. On the other 65 days there is nothing but gloom and despondency.

The monks still inhabit the monastery of St Martin and, for those with the masochistic urge to trek a mile up a very steep incline, it opens its doors to the weary traveller and the gawping grockel alike. Since it is a silent order there isn’t much of a welcome patter, but the ambience of a thousand years of history lies all around.  In Michelin-speak Vernet  is still worth a detour, especially for those whose bent lies in trudging the Pyrennean paths and breathing the clean pure air of the mountains.  But please bring your warmest clothes in winter, and then some. This applies even in summer, if you intend to ascend to the Chalet des Cortalets at 2000 metres in the jeep taxi, and then trudge to the top at 9000 feet . A simple zephyr below can be a raging tornado up there.

Up on the hill, in front of the church, the lone monument  to the 1904 Entente has survived its 109 years of existence and receives the occasional spruce-up to assuage its loneliness. Its significance of course has long lost its edge, since the carve-up of Africa and the Middle East into French and English fiefdoms, which the entente was meant to set in stone, disappeared into the desire of countries to become masters of their own destiny. Which is an apt closing metaphor for today’s Vernet les Bains.