Castellers originated at the end of the 18th century in Valls, Tarragona, when rival groups of people called “colles”, began to compete in constructing human towers. Those who take part in these tours are called castellers (castle-makers) , fearless men and women who wear traditional Catalan costume and climb on to each others shoulders to create a human pyramid, sometimes up to eight or nine storeys high and often topped off with a brave child, a bit like a cherry on a cake!

WATCH THEM IN ACTION

Coming from the word castell, meaning castle in Catatan, castellers  belong to a colla castellera (team) whose aim is to make the most impressive castell (human tour) at festivals in Catalonia

The sash is the most important part of their clothing as it protects the lower part of the back and can give an extra foothold when  climbing. The length and width of the sash depends on the casteller’s position inside the tower and  can range from 1,5 to 8 meters. It  is usually shorter for higher positions.

The castellers climb into tiers of up to seven levels. The one who climbs to the top of the tower is known as the enxaneta.

The casteller motto is, understandably: ‘Strength, balance, courage and reason’. 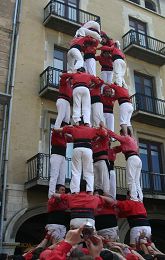 Besides the climbers,  a large group of people are needed in the pinya (the base of the castell), to help to support the weight and soften the impact if anyone falls. acting as a sort of safety net.

Castells up to 10 levels have been built.

Information compiled with the help of Wikipedia, the free encyclopedia