Basil Howitt and Clare Gallaway visit Carcassonne. It is by far the most popular heritage destination in the Languedoc-Roussillon, with 2,783,332 visits recorded at the Château comtal in 2006. 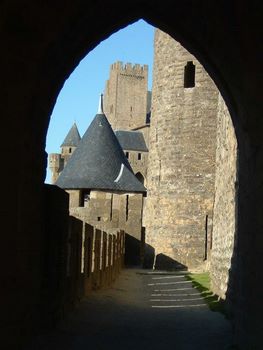 The mediaeval fortified citadel of Carcassonne – known as “La Cité” – is unique in the world. With its complex system of fortifications, it is the largest intact walled town in Europe.

But it very nearly did not make the 21st century. Some 150 years ago, it had fallen into ruins and was scheduled for demolition. In the ensuing uproar, the Cité’s survival owed much to the vision and clout of determined individuals.

Prosper Merimée will be known to many as an author of popular short stories, and especially of the novella Carmen, the storyline for perhaps the world’s most popular opera. In his capacity as France’s Inspector-General of Historical Monuments, Merimée visited Carcassonne and campaigned for its restoration.

Another key figure was Pierre Cros-Mayrevieille, Mayor of Carcassonne and an archaeologist, whose insistence persuaded the authorities to commission a report from Viollet-le-Duc.

Le-Duc was an architect who was already working on the restoration of the Basilica St Nazaire within the Cité. In response to Le-Duc’s enthusiastic report, the Commission of Historical Monuments authorised the restoration of the Cité under his supervision and work began in 1853. Some of his original plans can be seen on display in the Cité and give a vivid idea of just what an enormous task this reconstruction was.
In 1997 the Cité became a UNESCO World Heritage Site.

The long circular line of crenellated ramparts is punctuated by some 52 towers. The pointed conical towers, like witches’ hats, are topped with shiny blue-grey slate. Others, though still pointed, are more squat, like coolie hats, and topped by pantiles. Bathed in the different lights of summer and winter, evening and morning, and also by the massive nocturnal illumination system, the walls can be honey-coloured, rose, orange, grey, blue …..

The slate-topped conical towers of Le-Duc are said not to be authentic, while a real travesty is his bizarre crenellated top of the Basilica’s west belfry wall. Even so, the interior of the church is a breathtaking blend of styles with its Romanesque nave and barrel vaulting, and the heavenly gothic east end with its exquisite stained glass windows.
Although nowadays we see Le-Duc’s renovations as somewhat questionable, it must be remembered that they were within the spirit of that age rather than an invention of the man himself; and the Cité, after all, was saved.

The circumference of the lices (“lists”) between the inner and outer fortified concentric walls is three kilometres. On our weekend visit in March the weather was ideal – sunny, windy and cold – and we walked right round them. Definitely recommended! – if only for the magnificent views of the Ville Basse (lower town), the surrounding countryside and, above all, for a timeless feel for the citadel’s impregnability. 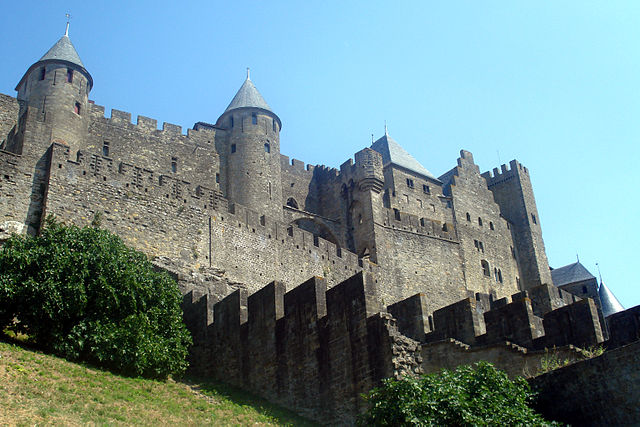 A spot of history with a few token dates

Although Carcassonne’s origins go back to pre-Roman days, the Cité’s overall structure today derives mainly from the 11th-12th centuries. During this period, Carcassonne and its ruling Trencavel family were central to the development of the new Occitan Cathar religion.
The Cathars were not, in those days, generally known as such. Called “bons hommes” “bons chrétiens” and “parfaits”, they were regarded as heretics by the Catholic Church, and the ensuing conflict was characterised by unspeakable violence and persecution. In the summer of 1209 forces led by the papal legate Arnaud-Amaury, consisting of “crusaders” and armies of the King of France, laid siege to Carcassonne.

For modern visitors, the Trencavels’ Château Comtal in particular is a forceful reminder of the mediaeval need to protect one’s home – a fortified precinct within a massively fortified town. Only one gate (the Porte Narbonnaise) was wide enough for carts to pass into the Cité itself. Today within the walls, we can still see numerous wells which were of course vital to provide water during sieges, and many small gardens providing vegetables.

In spite of this, in August 1209, Carcassonne fell. The young Vicomte, Raymond-Roger Trencavel, was thrown into his own prison and died there aged 24. Simon de Montfort was installed as the new Viscount.
In 1258 (Treaty of Corbeil) Carcassonne and the whole of the Languedoc was transferred to France. King Louis IX created a new Lower Town (Ville Basse) across the river. He and his successor Philip III also built the outer ramparts of the Cité. In 1659, the Treaty of the Pyrenees transferred Roussillon from Spain to France, and Carcassonne’s military role became near-redundant. Fortifications were abandoned, and the city became mainly an economic centre concentrating on the woollen textile industry.

After Simon de Montfort: the invasion of Michael O’Leary and Ryanair

Even those largely uninterested in history and warfare can hardly fail to engage with them, given the spectacular evidence before our eyes. Unfortunately though, once inside the town, the spirit of the Middle Ages is pretty much dissipated. No selling opportunity is overlooked – mock tapestry cushions, overpriced goodies and cosmetics, and every manner of tacky tourist tat. Faux-mediaeval suits of armour stand on the pavements, and signs in mock-gothic lettering clatter in the wind. The whole town seems to have suffered a massive good-taste bypass – the worst manifestations being the “Haunted House” with its moving papier-mâché tree and crowds of shrieking teenage visitors, and the Museum of Inquisition with torture implements. What a trivialisation of the horrors suffered by the real inhabitants of this area some eight centuries ago!

It would take an outsize imagination to hear mediaeval voices amid this motley jumble of modern tourism at street level. Just occasionally though, lifting one’s eyes to the fine old stones of upper storeys gives a sense of the past.

A final word of advice

If you can, visit outside the main holiday periods. And take great care if (like me) you are visually disabled. Some of the rough cobblestones in the lices are a nightmare to negotiate, and most steps everywhere are unmarked – even those descending to the main tourist office by the Porte Narbonnaise.