Join  Marian Thornley every week as she shares the ups and downs of her move to, and life in Céret

We woke up for the first time in our new home, realised it was late and threw open the shutters, allowing brilliant sunlight to flood the stone walls of the bedroom. Other than not having any breakfast, our first concern was that the pedal of Bill’s bike had dropped off, making it somewhat difficult for him to ride it. Although we counted ourselves very lucky that the owner had allowed us to live in the habitable side of the house, while he and his two teenage daughters camped in the derelict end (which we now called The Other End), we had no food and no transportation, and the shops were 4 km away down a very steep hill! We formulated the plan of freewheeling downhill to Ceret, dropping Bill’s bike off at a bike shop, then going to the supermarket and getting a taxi home with our provisions. This plan failed at the outset with a Gallic shrug by the bike man, who either could not or would not fix the pedal.

But a taxi drive later we were eating lunch in the garden when a blonde-haired woman strode across the lawn and, to our surprise, welcomed us in a strong Yorkshire accent. She introduced herself as the ex of the owner and told us she had left 2 years previously, since which time the mas had fallen into disrepair and neglect, especially since her husband’s heart attack. A few weeks later, in the notary’s office, the owner informed us somewhat gleefully that he had not one but two girlfriends, one aged 33, and the other 22. They both call me Papa,’ he added.

Although deliriously happy with our new home we couldn’t help but feel strange and rather disoriented. Bill remarked that we had gone from one extreme to the other, from a tiny cottage in a very wet, green place, to a huge house in a very hot, dry place. It did not seem quite real that we were now praying for rain to ease the dusty, parched lawn and wilting plants.

A year before leaving the UK Bill had volunteered on various organically-run farms around the world (Spain, Portugal and India) and had also helped to build the straw bale building near Windermere for the National Trust. Just before leaving Cumbria we had been invited (on a very rainy day, of course) to its official opening. Called The Footprint Project at St Catherine’s, Windermere, it is now used as a resource centre to teach children about sustainability and can be rented as a yoga retreat. It is a truly beautiful building, set in wild flower meadows, with a rounded shape and a roof made of shingles (wood tiles). Since that time we had harboured desires to build a smaller replica for ourselves, and we walked around our six acres (still couldn’t believe that), discussing possible places for a straw bale yoga studio. We also needed to know where our boundaries lay. While walking with us around the land, the owner had waved his arm in the general direction of the boundary and said it lay over there ‘somewhere’. We were a little nervous of walking too near this boundary in case we unwittingly trespassed on our neighbour’s land. Clearly this was not going to be a very satisfactory arrangement.

On our first Saturday we fixed the panniers and trailer to our bikes and set off downhill for the famous Ceret market. The colourful Catalan flag fluttered high among the branches of the plane trees and the streets were ablaze with stalls shaded by awnings in stripes of red and orange, and laden with fruits, vegetables and herbs. We were in heaven. Wherever we walked stall keepers called out to us to buy their locally produced honey, fruits and cheeses. We inhaled the mediterranean scents of lavender and rosemary and admired the snowy mounds of garlic and were even charmed by the toothless harmonica player. Loading up our bikes we puffed slowly back up the hill.

That evening we ate mussels next to the pool, watching the swallows dive in and out of the upper windows. The part of the mas we had ear-marked as a yoga studio seemed to provide shelter to several birds as well as bats, and we felt very guilty that as we renovated we would inevitably deprive them of a home. While we were pondering the fate of the birds and bats, the owner appeared and invited us to join a little party which was going on in The Other End. We both find social occasions a little difficult when we don’t know anyone and with our lack of French this felt a hundred times worse. Fortunately for us, the dozen or so people there were quite drunk and were happily dancing around the garden doing the can-can. There was nothing else for it but to accept the champagne, whisky and cakes offered and join in. Bill and I later disagreed on this but I was convinced that the gorgeous young woman whose 22nd birthday was being celebrated was the owner’s girlfriend, but I could have been wrong.

We identified an area for a vegetable garden. It was about 6 foot high in brambles but close enough to be watered, and sheltered from the wind. Bill had the idea of diverting the grey water into some reed beds, which could then be used for irrigation. There is an avenue of very old mulberry trees leading from this part of the garden towards our small patch of woodland. Apparently mulberry trees have traditionally been used in France to line roadsides, and so we concluded that our avenue was the old road.  The trees are very old, and we were pleased to see their twisted and gnarled trunks — great habitat for insects and birds. We were worried to notice, however that the half dozen acacia trees dotting the lawn were losing their leaves at an alarming rate. The owner had shown us a watering system using water that he collected from the mountainside, and so we started watering the trees in an effort to save them. 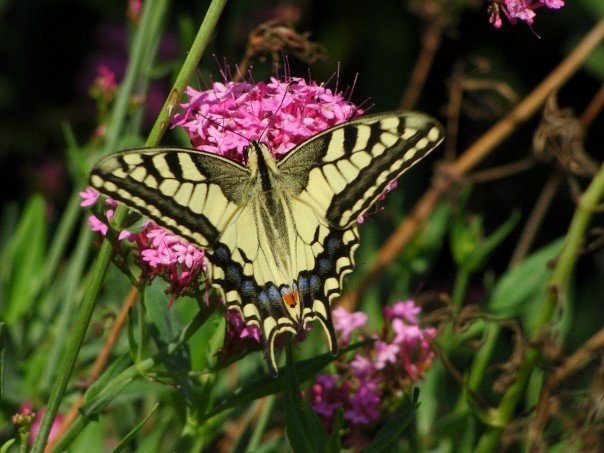 As well as the immediate garden around the house and the woodland we were pleasantly surprised to realise that we also the owners of a rather lovely meadow. This meadow was about two foot high in grass, but as we walked through it we counted about 30 almond trees and several thickets of brush and bramble. There were a few wild flowers and lots of thistles. We had already noted several types of butterfly but, disappointingly, not seen many birds although one of these was a hoopoe and a buzzard swooped overhead. As we walked around the meadow (carefully avoiding the area near the so-called boundary), we noticed well defined tracks about a foot wide, interspersed with flattened areas where some mystery animal had been lying. I thought it was a wild boar but Bill was adamant that there were no wild boar in the area and it must be deer (wrong again, dear husband!)

Our lack of transport was starting to become a problem. It was feasible, of course, to ride down to town and back up with a bike-trailer full of groceries, but cycling up the hill with anything heavier than a baguette on the back was not only hard work but took most of the day. After a shopping expedition that included a couple of bottles of wine for a dinner party for some new friends, we decided that, lack of funds or not, a car was going to be necessary. Trudging on foot from garage to garage in boiling temperatures (especially when you do not know where said garages are) is not something I would recommend. Not only that but we were horrified by the prices of beaten-up old bangers. One garage owner told us she wanted 4000 euros for some old thing that barely had wheels and which seemed to have melted onto the tarmac.

The other problem was that our furniture seemed to be stuck somewhere between the north of England and the south of France. Our very helpful and friendly vendor would be moving out soon and indicated that he wanted to take his furniture with him (not surprising but nevertheless a bit of a blow), so unless we wanted to sit on orange boxes we would have to sort it out.

IF YOU ENJOYED THIS ARTICLE, PLEASE SHARE WITH OTHERS