Eldorado? – or Sodom and Gomorrah? 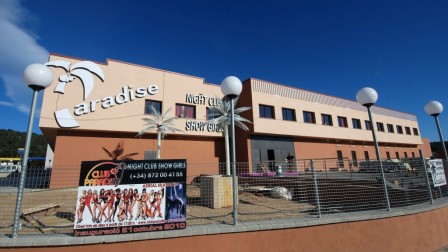 “Sign of the times: we close down factories and open up brothels.”
Letter: M. Louis Ballester, L’Indépendant 11/11/2010)

“An establishment selling women for sex is situated right next to one selling tyres.”
Website of the anti-prostitution campaign Le Nid, referring to Le Paradise at La Jonquera

Situated in the Spanish border town of La Jonquera, it is Europe’s largest-ever maison close or brothel, with 80 rooms and up to 200 prostitutes. At weekends, the clients of this “Eros Center” or “Night Club Hôtel” are overwhelmingly Frenchmen from the neighbouring Languedoc-Roussillon and further afield. 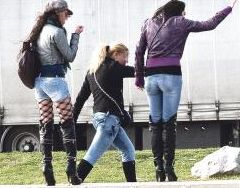 When my schoolmates and I were sixth-formers in the late 50s at a boarding school in central Manchester, we eagerly offered ourselves for a regular nocturnal duty.

Every night except Saturday two lads were deputed to walk to the central post office between Spring Gardens and Fountain Street and post the school’s mail in time for the last collection at 9pm. This mission was popular for several reasons.

There was the chance of sneaking into a pub for a pint of Boddingtons or Wilsons (compulsory school blazers hidden in bags).

Forever hungry, we could buy hot meat and potato pies from the stalls in Piccadilly Gardens – much to the ballistic fury of my mother who swore I would be fatally poisoned.

Most interestingly of all we could eye up the “tarts” who solicited at the back of the post office on Fountain Street, York Street, and behind Lewis’s. None of us had the wickedness to take up their come-ons; not even their cheapest offers of hand relief for 10 shillings. (“Toss yer off for 10 bob luv?”) With our repressive Protestant upbringings – I had been a cathedral chorister and was still a server and cross-bearer at the Cathedral – we were terrified of sex, although of course this new world of sin and wickedness locked us in its grip. Especially when some of the women were doing their “business” wrapped inside men’s overcoats, in dark doorways anywhere they could find in the maze of dark alleyways and ginnels off Market Street.

From Manchester to Montpellier and La Jonquera

How times have changed! Today, fifty odd years on and 1200 kilometres further south, groups of lycéens (sixthformers) are, according to La Dépêche, travelling from Montpellier at weekends for sex in the bordels of La Jonquera.

In at least some cases, their parents will probably approve or turn a blind eye. According to an opinion poll conducted earlier this year by the CSA organisation for Le Parisien, 59% of the French are in favour of reopening brothels.

In my late teens I had a close French friend whose father, when the time was ripe, took him to his favoured “cinq à sept” lady near the Madeleine in Paris and asked her to show his son what “it” was all about. In some ways I envied my friend: he had far fewer hangups about sex at that time than I did. Fortunately, however, I managed to catch up in the end!

Sixth-formers are not, of course, the only customers at the bordels of La Jonquera. Men from all over the Languedoc-Roussillon, and from much further afield – even from as far away as Nancy, some 750 kilometres to the north – make the return journey.

Le Paradise, having opened as recently as 21st October, 2010, (and having been closed down by the police in 2015 for a variety of charges – ED) is already (according to its manager Nico) welcoming up to 600 clients a night between 5.00pm and 4.00am (5am at weekends). Other smaller establishments – puticlubs – include Lady’s Dallas, Désirée, Madam’s… 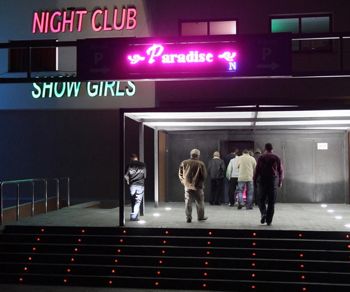 Quite simply it is a boom frontier town built on low-duty Spanish goods, where brothels have been legal, as they have throughout Spanish Catalonia, for the last 8 years.

Whereas once La Jonquera was a little village with ochre coloured houses, it has become a vast commercial zone.

At a recent count there were 16 supermarkets, 400 stores, 46 restaurants and 16 service stations.

And, of course, there are also the brothels. Although they have been illegal in France since the passing of the law “Marthe Richard” in 1946, they were legalised by the Generalitat or regional government of Spanish Catalonia in 2002. Legal, that is, as long as those who run them take no direct cut from the women who sell their bodies. Pimping of any kind remains illegal.

“We are in the relentless grip of market forces,” writes Alain Tarrius, Professor of Sociology at Toulouse’s Mirail University. Hypermarket sex at La Jonquera, he argues, is an inevitable and totally logical consequence of the laws of supply and demand in our globalised consumer society with its economies of scale. If we can buy cheap alcohol, cigarettes, fuel and tyres in La Jonquera, why not sex also?

After stocking up on fuel, alcohol, cigarettes and provisions it’s time, if you are with your mates or alone, for a quickie. Le Paradise is conveniently and enticingly situated right next to a tyre merchant at “Mas Morató”, the industrial and commercial zone on the outskirts of the town. Not for nothing has Le Nid organisation dubbed Le Paradise a “contemporary factory brothel”.

A peep inside Le Paradise

The owner of Le Paradise, a man with the somewhat startling name of Jesús Moreno, makes his money by renting out his 80 rooms to young women at 70€ per room per day, use of gym and food included. Jesús Moreno is happy to show visitors the identical rooms where sex is “consumed” (sic) by clients.

There is a bidet on the right as you enter, and at the far end is a bed covered with a black bedspread. Above it is a mauve neon light. “Almost like being in a hearse” according to one journalist, Jean-Marie Lebraud.

Incidentally, Jesús Moreno is no novice in this business. As well as shelling out 3,000,000 euros for Le Paradise he has already created two other brothels not far away: one at Melianta, near Banyoles (south of Figueres), the other at Mont-Ras near Palafrugell on the Costa Brava.

Where does Moreno’s money come from? Although the police suspect him of money laundering and white-slave trafficking, they have so far not been able to nail him.

Two Brazilian women are currently giving evidence in a case against him for trafficking. Moreno is adamant that his business is all above board. He takes no money from the prostitutes other than the rent of a room – though given what the room is explicitly used for, this itself of course could be considered as living off immoral earnings.

The women charge what they like and he takes no percentage from their incomes. Since the rate charged by each woman is around 60€ for “une passe” or sexual encounter of half an hour, she starts to make money after servicing two clients.

And since she might entertain four to six men a day, her weekly income is infinitely higher than anything she can earn in her country of origin. This is most often specified as being Rumania which is now an EU country, entitling its citizens to work anywhere in the EU. However, as we shall soon see, a Rumanian passport is no guarantee that its holder is Rumanian…

Personal safety and safe sex are definitely the watchwords of Le Paradise. After being discreetly vetted by security guards with concealed truncheons, each client buys an obligatory drink (alcoholic 12€, soft 10€) and has to pay 5€ for a disposable sheet, a condom, a lubricant and a towel.

The women must take a compulsory blood test and a smear every month. Then it’s down to negotiations in the two ‘salles de spectacles’ that can together accommodate 500 people. Choose your woman from all those variously clad or unclad.

Rugbymen apparently might be greeted by explicit pelvic gestures, whilst older men might be greeted with a softer touch and a peck on each cheek. “Will you be my father Christmas?” asks Paola who even lets her clients pay afterwards.

The VIP lounge has a cocktail-buffet and lockers where you can leave your half-consumed bottle for your next visit. Everything here is more “velvety” and the women are a bit older. There are 11 private suites with jacuzzis reserved for club members who pay an annual membership fee of 500 euros.

In his recent book “International migration and new criminal networks” Alain Tarrius investigates the sources of the traffic in prostitutes – not only those operating in Catalonia but also further down the coast of the Spanish Levant. “The trafficking is the result of globalisation,” he writes, claiming that the young women are bought and sold by mafia networks.

Everything, according to Tarrius, begins in Afghanistan. “During the poppy harvest some 65,000 Afghans converge onto the ports of Samson and Trebizond in Turkey or Poti in Georgia. Here the Afghans buy at half price electronic and other technological goods coming from South East Asia. This market is known as “poor to poor” … and is tacitly allowed by the international conglomerates.”

Tarrius continues: “The Turkish or Italian mafia get hold of the drugs in the ports of the Black Sea. The money from this traffic, worth some 6.5 billion euros, is used to buy the oldest traffic of all, namely young women.”

They are recruited in Moldavia, Macedonia, Albania, Montenegro and Serbia, and then supplied with [forged] Rumanian passports enabling them to move around more freely in Europe. Another source, Le Nid, alleges that women from Hungary, the Czech Republic, Poland, Columbia and Brazil are also trafficked.

These young women, says Tarrius, are sent to southern Italy for a month to “learn their future trade” of prostitution. After this, they are sent to work in the Spanish clubs. “A number of these women are put up for auction and sold to residents in Catalonia. The prostitutes must first of all pay back huge sums – 70,000 euros each – before they are set free.”

Where does the poor mayor of La Jonquera, Jordi Cabezas, stand in all this? Whilst acknowledging that the sex supermarkets bring money to the town (perfumeries, beauty technicians, hairdressing salons, pharmacies, doctors, taxis et al) he certainly doesn’t “rejoice” in this extra income.

Having battled in vain for a long time to prevent planning permission for Le Paradise he has thrown in the towel. He has proclaimed loudly and clearly that “we were forced to give construction permits following a judicial decision by Catalonia’s high court.”

The worst headache of all for Jordi Cabezas must be the prostitutes operating uncontrolled in La Jonquera’s huge HGV parks. Declaring herself to be Rumanian, Annetta for example, “wearing a false fur jacket and jeans” zigzags her way between the HGVs, soliciting and bargaining. Then she hops up into a truck and does the business.

According to Le Journal du Dimanche, there are dozens of other girls doing the same thing. Some of them, boast three Portuguese truck drivers Justino, Jose and João, will provide the “full service” for as little as 5 euros.

One of these desperate women was recently killed by an HGV vehicle while trying to dodge the police.

Poor Monsieur Cabezas is on a hiding to nothing if he hopes to put a stop to all this. Unless, that is, the wrath of God comes to his aid and destroys this latter-day Sodom and Gomorrah. Just as in biblical times he destroyed these cities, along with Admah and Zeboim, with brimstone and fire.