The ramparts of Fort Lagarde are now open! 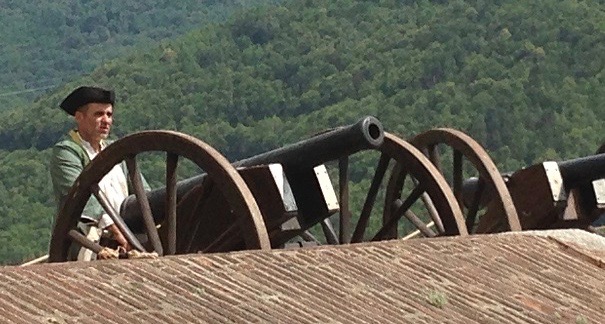 Every year, in the Summer, the fort puts on a daily show tracing back its military history.

Fencing, canon ball fire, cavalry advances, and battles are all part of this reconstitution entitled ”A la pointe de leurs épées, l’émotion’ (emotion on the tip of their daggers)
Show starts at 15h, every day apart from Saturday until the end of August. Free shuttle buses leave from the Office de Tourisme to take you to the fort (starting from 14h10)
For more info: 04 68 39 70 83

In 1659, the Treaty of the Pyrenees brought about the annexation of Roussillon with the kingdom of France.

Prats de Mollo therefore became a border town, and to overlook and protect the fortified town and border, Fort Lagarde was built.

The fort was constructed in several stages around an old mediaeval signal tower in the area of Lagardia.

Traced back to 1307 during the reign of the Kings of Aragon, this circular tower forms the heart of the actual fort.

The major part of the construction was organised by Vauban, the officer in charge of fortifications for Louis xiv, from 1677 onwards.

The dungeons, originally intended to keep the inhabitants of Prats in check, were extended and a link was built from the fort to the town, made up of an underground passage and covered road..

This is recognised today as a particularly good example of adaptation and progress of fortifications in that period.. Many more modifications were added up until 1858, planned in the main by Rousselot.