Situated to the north east of Cérêt, at an altitude of 300m, this 13th century chapel had the hermitage added in the 18th century and other buildings added later to accommodate the many pilgrims who came to pray at the chapel of St Ferréol.

Saint Ferréol himself actually lived in the third century but his sacred remains were moved to Céret for security during the crusades against ‘heretics’ of the 13th century and a chapel built to honour them.

Nobody seems to know why but inside the chapel is inscribed « Llaurens Cros, fill d’Illa ermita de Sant Ferriol, estat 44 anys esclau a Constantinople, 1705″, meaning “Laurent Cros, native of Ille, hermit of St Ferréol, was a slave in Constantinople for 44 years”!

Find out more about the hermitage here. 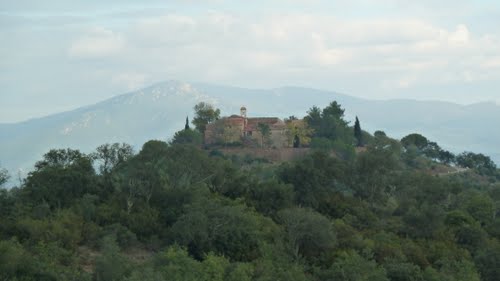 Each year, the peaceful hermitage bursts into life with the annual Festa Major. Tradition, religion, food and drink… it’s a firm favourite with the locals.

On Saturday 18th September, during the Journées européennes de patrimoine, why not make the pilgrimage (on foot or by car!) and see what it’s all about?

Because of the current sanitary crisis, there is no terrroir meal organised but why not pack a picnic or book in to one of the local restaurants?

10h : Procession around the hermitage followed by a Grand Messe