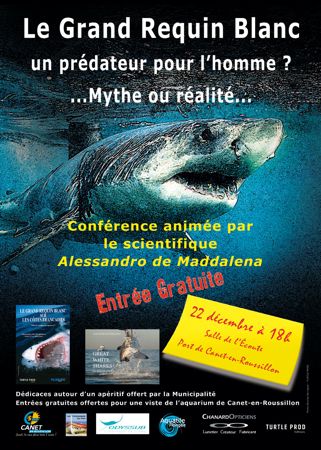 There is often talk of danger and aggression from sharks towards humans. The best example was undoubtedly Jaws by Steven Spielberg in 1975, which helped to fan the flames of fear of sharks, along with statistics of  various shark attacks around the globe.

In fact, there were 100 shark attacks worldwide last year. Eight were fatal. On the other hand,  mosquitoes kill 800,000 people a year and bees or hornets 400 per year …

There are around 500 species of shark in the world. Three are threatened with extinction because of fishing. Over 1 million sharks are caught per year … Who is the most dangerous? The shark or the humans?

As part of his national tour to present his new book, Alessandro de Maddalena will be in Canet on December 22 at 18h in the salle de l’Écoute, to give a lecture on the great white shark.

Researcher, writer, photographer, illustrator, de Maddalena  is one of the leading experts in the world of sharks as well as the curator of the Italian ‘Banque de Données’ on the Great White Shark.

He will speak of speak of shark behaviour and explain why they attack humans. He will also explain the consequences of their destruction on the marine eco- system.

For more info on this free lecture, contact: confrequins@gmail.com