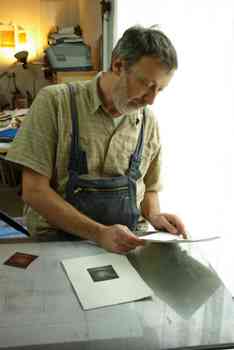 The first impression of Albert Woda is of an imposing and substantial figure. Once his tall frame relaxes into a chair, you are drawn into the blue eyes flecked with light, reflecting the visionary quality of his works. His very name means “water” in Polish and explains why his printing house is called “Editions de l’eau”.

Born in Nice in 1955, he studied there at the Thioule and Arson art schools. In the field of engraving Woda had two great teachers . Anne-Marie Peguet instructed him in the range of techniques from dry-point to mezzotint, while Jacques Matarasso introduced Woda to the world of illustrated books. The limited editions of his engravings have allowed Woda to sell at affordable prices and, therefore, to live from his art.

Woda is one of a handful of contemporary artists who create mezzotints – a delicate and complex technique – in which forms emerge as if from shadows. You have to concentrate, peering into the black, before the greyness reveals an infinity of images. Well worth the effort. The more you look, the more you see: a tree, a cloud, a curve of neck or breast, an angel.

While his engraving is exclusively black and white, painting allows the artist to explore colour. He admires “Rothko for his colours and Rembrandt for his shadows”. Woda’s pigments are of earth colours, ochre and blood orange. His restrained palette is reminiscent of Rembrandt. Sometimes a nuance of blue peeps from an orange sky, implying another level, a greater depth. And it is here in the layers that the real Albert Woda emerges, exploring light and shadow. His imaginary landscapes are overwhelmed by the heavens swirling above them, illuminating or concealing the paradox of existence. He is currently collaborating with the poet Salah Stétié on a book entitled “La grande barque”. In 2010 he will present an exhibition of portraits and nudes at the Arthus Gallery in Brussels. Meanwhile, during the month of November, you can see a sample of Woda’s books and paintings in Perpignan’s Médiathèque (15 Rue Emile Zola).

Woda sees himself as an independent – not adhering to any school or movement or market force – but by no means working in isolation. What is important to him, what nourishes his creativity, is contact with other artists and writers. “Life is more important than art,” he concludes.