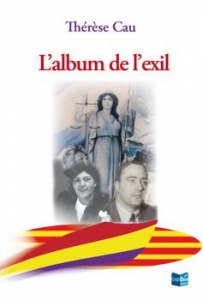 In this book, “ Album of Exile,” (published by Cap Bear Editions 2013 – in French) Thérèse Cau, daughter of Spanish Republicans and native of Port Vendres, recounts the tumultuous history of her family, from their origins in Catalonia to their lives in France today. It is invaluable material, based on patient interviewing of her elderly mother and careful research into family archives.

From 1934 to 1941 her mother, Maria, worked for the family of Josep Tarradellas, accompanying them into exile after the end of the Spanish Civil War, and sharing their life in Paris and the South of France. Tarradellas was a Spanish republican politician, exiled from 1939 to 1977, when he returned in triumph to Barcelona to become president of the Generalitat of Catalonia. Tarradellas’ story provides a backbone for the book, and Cau inserts succinct summaries of the historical background as the story unfolds.

But it is the story of her family that is most important, how the families of both her parents ended up divided for decades by a closed frontier between France and Spain, the experiences of her father and uncles on the frontline of the Spanish Civil War, in the internment camps in France, the struggle to reconstruct their lives in a new land where they did not speak the language. Cau brings the story up to date with her own determined pursuit of education, including her time as a teaching assistant in a Welsh pit village, and years of teaching in Corsica and Africa.

Her exploration of the history of the period through family history and personal anecdote brings the past alive in the most invaluable way. (Her French is clear and not difficult to understand for an English reader.) Such personal testimonies are rare, since so often people can’t or don’t wish to remember those terrible times. I recall the man I met on a Retirada commemoration march who described the suitcase he had found under his parents’ bed after they died, filled with family mementoes they had brought with them in 1939. They had never opened it. Thérèse Cau has opened the suitcase for us.