The traditional Christmas nativity scene or ‘pessebre’, is still very much alive and kicking in Catalonia… but what every Catalan child is really looking for is that bare bottomed bounder, the ‘caganer’

This year, once again, Caganer.com, the Catalonia-based company of caganers, presents forty new figures from the world of music, politics, cinema, sports and the digital world. How many do you recognise?

In fact, all manner of politicians, sports stars and celebrities are now given the dubious honour of being turned into a ‘caganer’. An unusual Christmas present to make a friend or family member smile, and symbolising good luck for the coming year. 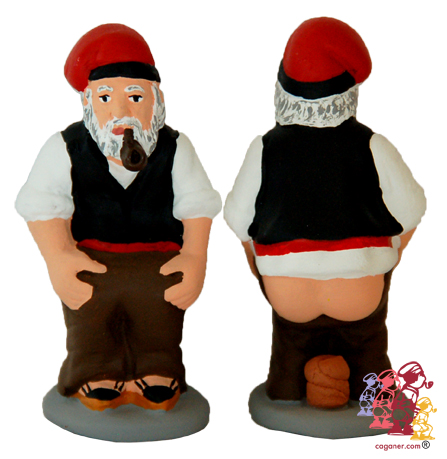 All about the caganer

A popular and much loved Catalan Christmas figure, this small statue, originally of a pooping peasant wearing traditional floppy red Catalan cap (barretina), crouches with trousers half down, in a ‘toilet’ position, making his small contribution to the land. 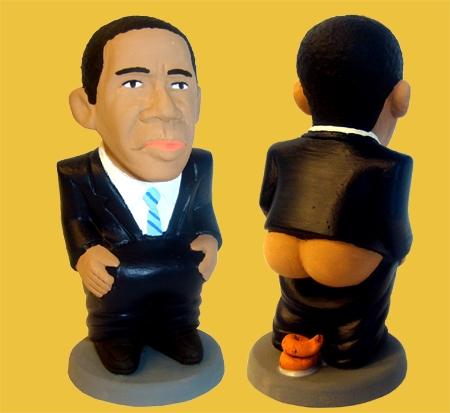 He might be smoking a pipe or reading a newspaper to better pass the time!

Often hidden behind a tree, or round the back of the stable, the fun is to find the cheeky chappie, symbol of fertility, hope and prosperity, health and happiness for the coming year. 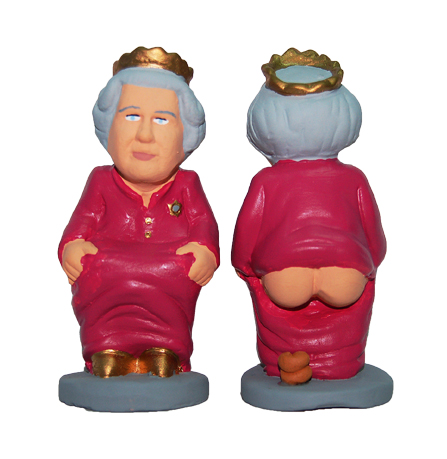 Originally men only, one early caganer scene showed the wife waiting at her husband’s side to wipe his bottom.

Today, liberated women are represented by ‘caganeras’ and are crafted to wipe their own bottoms!!

Other figures were also added over time to the peasant…. washerwomen, shepherds, fishermen….,. Today, modern caganers may represent almost anybody.

William, Kate, Che Guevara, Madonna and Michael Jackson squat next to the Pope. Elvis, Ronaldo, Tiger Woods and the Queen crouch nearby.

Contraversial? Maybe. Disrespectful? Not at all.

Marc Alós for the company  www.caganer.com  who craft these unusual and novelty caganers by hand, explains, “They are by no means intended to mock the personalities but rather to pay tribute to them” 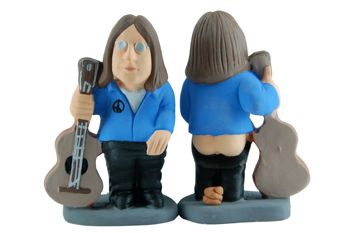 Marc adds “We continue to create figures based on the current events but also pay homage to historical figures. With the Squid Game we think it can be as successful as another Netlfix series like La Casa de Papel, in which we sold out its caganers two years ago”. Of the Korean series, the most watched on Netflix in its history, Caganer.com has created two figures: the Guardians (with the red uniform and the black mask with the symbol of the triangle, square and round) and the one of the giant doll that stars in the bloody first chapter of the game to life or death inspired by the “Green light, red light” game.

Marc Alós heads, together with his brother Sergi, the second generation of the Caganer.com family business that his mother, Anna Maria Pla, started in 1992. Regarding the new figures, he adds that “after the last two years with few political caganers, this year we have recovered characters taking advantage of new appointments”. This is the case of Kamala Harris, vice president of the United States for the victory of Joe Biden, who has a caganer since 2020, and Pere Aragonès, who this year has become the 132nd president of the Generalitat de Catalunya. Also joined the list Isabel Díaz Ayuso, current president of the Community of Madrid.

The best sellers in its history are still those of Barack Obama, Donald Trump, Carles Puigdemont and Leo Messi, as well as the classic caganer with the catalan  “barretina”.

Caganers are painted in their workshop, by hand, using clay from the village next door

When Barcelona Council cut the caganer from the public nativity scene in the early 2000s, public outcry and media support quickly had the bare derrière reinstated, proof of its timeless popularity.

Some say that this uninhibited little figure is ‘fertilising’ the land to ensure a rich and successful harvest, others that he represents equality, in that we are all equal when it comes to biological functions.

All agree that he or she symbolises good luck for the coming year and after the year we have just had, 2020, we all need a bit of that! 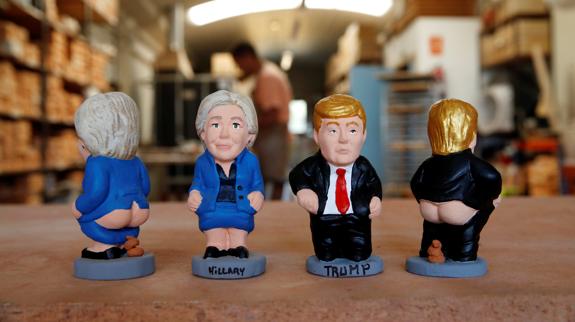 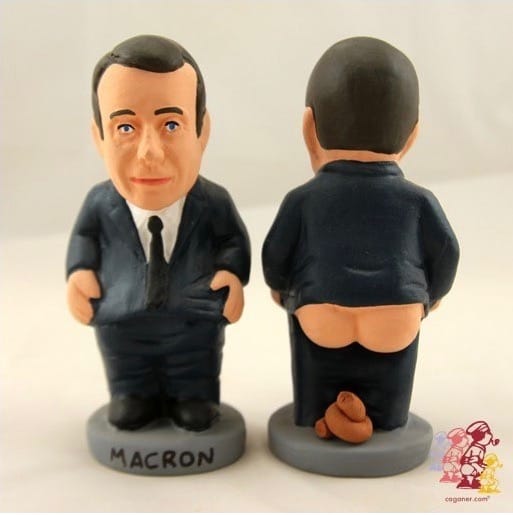