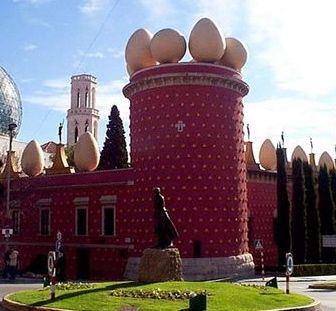 The town of Figueres is probably best known for that cathedral of wackiness – the Dali museum, but a bit of exploration will soon take you off the beaten track and provide an authentic fix of Spanish street culture.

For me the first point of call in any Spanish city is a Cortado – a strong espresso and dash of hot milk. You could choose from many good cafés on the new Ramblas, amongst a mêlée of students, business people, local families and visitors alike, but a short walk down one of the side streets will bring you to the splendidly arcane Café L’Aeora.

Situated in the old casino building, it has a wonderful faded elegance with its high ceilings, marble columns and huge, lazily turning ceiling fans straight out of an old Bogart movie. The prevailing ambience comes from a mixture of flirting youngsters, texting each other across the dark mahogany tables, together with old-timer domino players, puffing on strange yellow cheroots (which seem to remain alight but permanently one-inch long), arguing and generally setting the world to rights in Catalan.

Now here’s a thing; litter bins. That’s right, litter bins. The new Ramblas, in the heart of Figueres, has been provided with plenty of seating (strong, solid teak benches and even some individual teak armchairs) so your people-watching can be taken in relaxed mode, plus loads of proper good old-fashioned litter bins. It’s not until you think about it when you realise security measures have meant that such things have all but disappeared in most city centres around the world. Naturally the Spanish themselves wouldn’t dream of actually using them. Cigarette packets are best left discarded on the pavement to make it easier for the street cleaners to spot them, but at least tourists can feel suitably worthy when they put the bins to their intended purpose.

Art is at the centre of Figueres although you don’t have to like Dali, or indeed know anything about art to enjoy a visit to Figueres’s famous museum. Just go with an open mind and be prepared to experience the shock of the New – even though many of the exhibits are a half a century old.

The guidebook will tell you that Dali’s tomb is actually resting in the museum itself although I secretly think that this was just one of his mischievous jokes. My guess is that he pre-sold his mortal flesh, and that the real corpse is pickled in a display cabinet in some private collection in Buenos Aries where the touch of a button activates a rascally wink of the eye.

Street theatre is alive and well in early-evening Figueres and I don’t mean some white-painted student wrapped in a sheet who will reveal a yellow-toothed grimace when prompted by coinage, or the “tackle-out on demand” flasher I saw recently alongside the Charlie Chaplins and Michael Jacksons on Barcelona’s Ramblas. No, Figueres has the real deal. A proper little ten minute show given by an energetic and talented couple in the Plaza de Ayuntamiento. The man carries in front of him a human-sized puppet in the style of a 1950’s Havana nightclub schmoozy-crooner, attached at the knees and hands. He is partnered by a young woman with a dusky Diva puppet looking scarily like Tina Turner on a bad-hair day.

They sing and dance provocatively, backed by infectious Cuban dance music, with great humour and gusto to the gawping gallery of kids that soon form the front row. The extraordinary thing is that although there are visibly humans doing the work behind the puppets, such is the power of the performance that your mind blots them out and you begin to believe they really do have a life of their own.

Restaurants abound in Figueres and aside from the more obvious tourist-orientated establishments there are some excellent tapas bars and bodegas. For Tapas, try the Lizzaran just down the road from the Ramblas where cool Barcelona interior design meets Basque cuisine. You settle up at the end by handing in the cocktail sticks that accompany each serving, and at less than 2 euros each, it’s pretty good value. I particularly like the tortilla with smoked salmon, and the herbed cream cheese with raisins and almonds. But beware, they look and taste so darn good that those cocktail sticks soon mount up – “wow, did we really eat that much?”

Should you wander off to Figueres’s southern end you will find yourself in the Arab quarter where the shops and restaurants reflect the locals’ distinctive ethnic tastes. Colourful embroidered silks, dark latticed furniture, vegetables and pulses you can’t quite identify and tray after tray of pungent spices. There’s definitely a whiff of the exotic in the air – it’s nearly as good as a day’s excursion to Morocco.

The architecture on Ramblas itself is a real treat for the eye. The buildings mostly consist of rather grand five or six storey former merchants houses in a 1920’s south-American colonial style. They’re replete with beautiful pastel-painted wooden shutters, grand wedding-cake columns, overly ornate ironwork railings, and hugely self-important balconies. Ignore the gaudy Banks that occupy most of the ground floor frontages, look up through half-closed eyes and you can just make out the saintly Señora Peron tearfully basking in the adoring glow radiating from the massed throng gathered outside the Casa Rosada, calling “Eva, Eva, Eva”.

Figueres has a feel and style all of its own and sees no need to demur to its better known neighbours further south. Despite the recession that’s hitting the country so badly, the town still seems to demonstrate a certain confidence, one that shows in its shops, restaurants and in the faces of the business people hurrying by. I use the term hurrying of course in its broadest sense – this is still Spain after all and there is always time for a glass of Rioja and a morsel or two of tapas between those important meetings.