The border police have confirmed that  checks will start up again as part of the security measures for Euro 2016.

From 10th June to 10th July, expect queues at the Le Boulou péage, and Le Perthus crossing, both motorway and route nationale, as well as  regular random controls at the smaller border crossings such as Cerbère (route du col des Balistres on RD914), col de Banyuls, Coustouges on the RD3, col d’Ares at Maureillas on the RD115 and Las Illas on the RD13.

Police and customs checks at both the A9 motorway border between Spain and France, and the Le Perthus crossing on the National are causing massive delays both ways.

Motorists returning from Spain via the A9 this weekend or passing through La Jonquera and Le Perthus, faced queues of up to 25 kilometres long and up to 7 hours delay!!

The checks are in response to the Etat d’urgence’ (state of emergency)  declared in France since the tragic and horrifying terror attacks in Paris at  the end of 2016.
In October 2010, in late compliance with Schengen agreement of 1995, which decreed ’free movement of persons’ between participating EU member countries, the Le Perthus/La Jonquera border and A9 motorway border were abolished.

The initiative made an enormous difference to the heavy summer traffic bottlenecks at both motorway and Le Perthus borders, as the Catalan frontier was heavily manned by both French and Spanish police on a regular basis, and believed to be the most controlled border in the EU!
With increased terrorist threats, heavy security has once again been set up at the France/Spain border, with tighter checks on all travellers, including European nationals. Expect passports checks and verification of personal information with police databases – and a long wait, depending on when you are travelling. 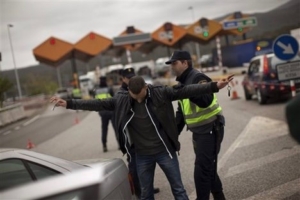 Etat d’urgence
According to the ‘Etat d’urgence’ laws of 1955 law, authorities can lock down complete neighbourhoods and even whole towns, close down entertainment venues, order spot searches inside any premises,  set curfews, ban public meetings…..

La police nationale may now keep their weapons with them even when off duty as long a) he or she wears a police armband for ID and b) he or she has attended at least one recent shooting course.

Curfews and an end to demonstrations.
The authorise can now insist on a curfew or prevent entry to the department of any person “cherchant à entraver l’action des pouvoirs publics”.

Shows, concerts…
The local government now have the power to postpone or cancel any social gatherings, sports events etc that could be a threat to security.

Checks and searches (perquisitions) any time, day or night.
The ‘forces de l’ordre’ are able to make spot searches and raids at any time, without applying for a search warrant. This includes building and vehicles, both public and private. Some exceptions include magistrate’s premises…and journalists!

What a brave new world we live in!