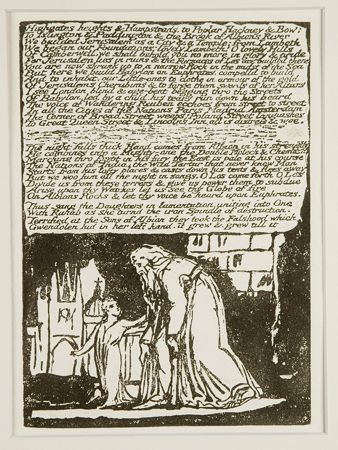 Banyuls is home away from home to Michael Phillips, a world expert on the late 18th and early 19th century poet, painter, printmaker, publisher and visionary.

Michael Phillips’ lifelong involvement with Blake started in childhood when his writer father introduced him to the poems.

Rather like all of us, “The Tiger” burned its way into his DNA. Michael eventually went on to make an understanding of Blake’s working methods the focus of his own development as a scholar and craftsman.

The Indiana Jones of Blake studies, Michael is a globe-trotting professor seeking out original copies of Blake’s illuminated printed books, such as the Songs of Innocence and Experience and The Marriage of Heaven and Hell among others, for an insight into how Blake produced them himself.

And his discoveries are prodigious. Michael has “cracked the code” of Blake’s writing and printing methods.

Blake perfected “mirror writing” so he could copy his texts backwards onto copper plates.

Set around or interwoven with the words, Blake drew his illustrations. Using acid, he etched the rest of the plate, leaving the raised surface fit to print. With a dabber he applied the ink.

A demanding and painstaking process involving many different skills, the preparation of a text for printing could take up to 2 hours. No wonder that only 160 copies of Blake’s illustrated books were produced over his 40-year career.

Having re-created Blake’s relief-etched copper plates and his method of printing them in an engraver’s rolling press, Michael Philips has produced prints on old paper using the same natural pigments available to Blake.

These works, exact reproductions of the exceedingly rare originals, will be on display and for sale in the El Xadic restaurant and wine bar show this summer. Examples can also be seen on Michael Phillips’s website.