Riera I Arago: The dream of the voyager 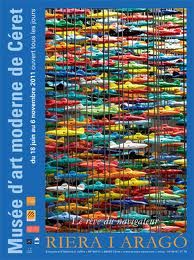 Is it an island or a mountain, a fish or a bird, or none of above? A question posed by Riera I Arago, the Barcelona artist with shows at Collioure and Ceret, until 6 November.

In the Museum of Collioure, your eye is first caught by plastic orange toy submarines suspended the length of the staircase, inviting the child within you to come and play.  Riera I Arago explains that the exhibition “represents an imaginary landscape, an unreal vision. It carries the universe, the home of man the voyager.”

The magical journey starts with “Islands” where bronze sheets of blue- green seas float around stone islands, their coves, caves and canyons illuminated by spotlights in an otherwise dark room.  Further on, frames containing real water line the floor, while the walls are hung with photographs of the solid masses and their reflections, creating the illusion of mountain lakes with snow-rimmed craters. Finally, in “Oceans” we find more suspended submarines reflected against a blue metallic surface. With titles like “Lost in Space” and “Frozen Islands”, Riera I Arago keeps us wondering where we are.

Riera I Arago’s guessing game continues in Ceret.  Where certain sculptures are “watered” every day, the bronze plates continue to oxidize. The visitor’s impression changes depending on the position of the sun or where you stand.

Inspired by a simple ellipse, Riera I Arago explores a range of possibilities. In the “Suite des Trois Soleils” a tall white propeller is accompanied by variations on the same form: a UFO, a beach umbrella, a windmill, a paper aeroplane, an errant bird.

The same exuberant imagination is evident in “111 Avions”. In deconstructing the idea of “aeroplane” into a propeller and wheels, Riera I Arago has produced a profusion of objects resembling bicycles, storks and even one of Giacometti’s dogs. You and your children will enjoy finding a favourite.

Three-dimensional structures with submarines hung in a Sargasso Sea of wires recall the “Oceans” series in Collioure. The seven stages of “Immersion”, the body of submarine lowering itself under water, reveals itself as the precursor of the islands series.

In “Journals”, Riera I Arago has illustrated his days in a strip of playful Klee-like figures in black ink and water colour. Choose one and try to retell the story of his day.  “He dug in his garden with a spade, a goat with horns danced by and then…”

Everything is possible in the dream of the voyager!