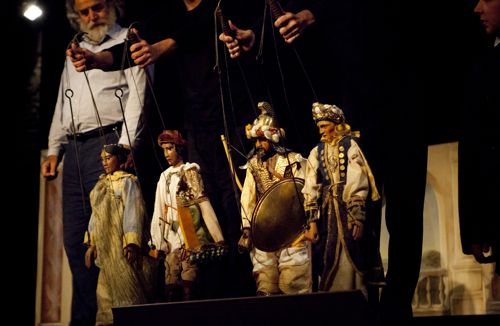 Sicilian Puppet Opera ‘ Opera dei Pupi’ popular in the early nineteenth century, has declined over the past 50 years, so it is interesting to some puppeteers who continue to practice the art, which was awarded a place in 2008 in the UNESCO Intangible Cultural Heritage Lists

Puppet can be 130cm heigh and weigh 35 kilograms, and are characterized by their high metal hook and two iron rods (one for the general manipulation, the other to move the right hand). With wooden frames covered with rich fabrics, they are manipulated by a puppeteer dressed in black to melt into the background.

Vincent Dumestre’s group le Poème Harmonique joins Alexandra Rübner and the performers of Arcal in the Venetian opera: Caligula, composed by Giovanni Maria Pagliardi in 1672 and previously unreleased in France.

Baroque opera and the art of Sicilian puppetry come together to paint the passions of the Emperor Caligula, an almost mythical figure intoxicated by power, and his lover, the Queen of Mauritania, in an affair that leads to madness.  If the puppet theater tradition is rooted in the cultural history of Venice, Alexandra Rübner’s direction is modern, the puppet’s movements graceful, whilst the puppeteers who operate them and the singers who give them voice remain visible. A fascinating mix of wooden figures and flesh and blood bodies render a magical emotional expressiveness.

Love or hate the exterior look of the place, the auditoria it contains are excellent and the shows put on there are of the highest international standard. The biggest auditorium in the complex is called “Le Grenat” (the maroon blob in the picture) and I admit it took me a while to realise that this is a blatant visual reference to Perpignan’s reputation as the centre of garnet jewellery-making.

This is one of the finest performing arts complexes in France, with a performance programme to match, so if you have not already checked it out, I urge you to do so. More information at www.theatredelarchipel.org or call in (between 12.00 and 18.30) for their free 100 page brochure.