We happened upon the Satori B&B completely by chance. I’d decided that a weekend away in Spain would be just the thing to relax after some strenuous work in the garden – so I found what looked like a pleasant place to stay in a town on the other side of the border. 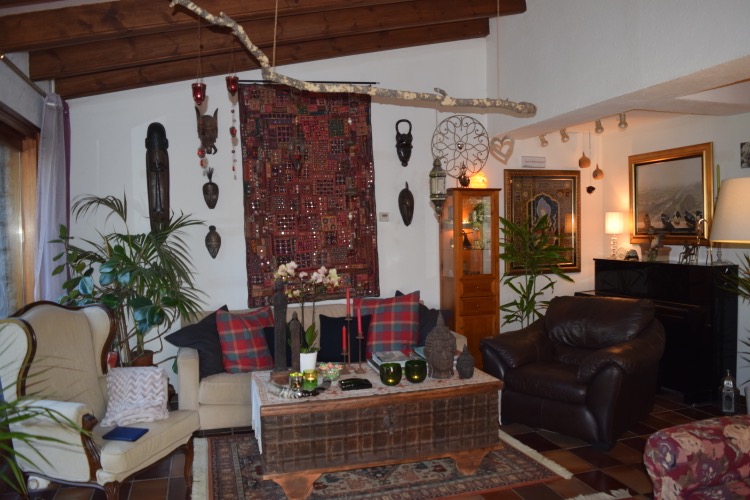 Prats de Mollo makes the perfect stop-over for travellers bound for the Spanish Pyrenees. We’d never really looked around the town properly so after a coffee we meandered through the cobbled streets, taking in the outside of the fort and church. Unfortunately the church wasn’t open but the gates to the tiny Chapelle des Stes Juste, Ruffini beckoned. If you are in Prats this chapel is well worth a visit, with beautiful paintings and stained glass windows.

The drive over the Col d’Ares was saissisant, with snow capping the peaks of the high Pyrenees. After the col the road winds gracefully all the way down to the town of St Joan de les Abadesses, on the way to Ripoll. 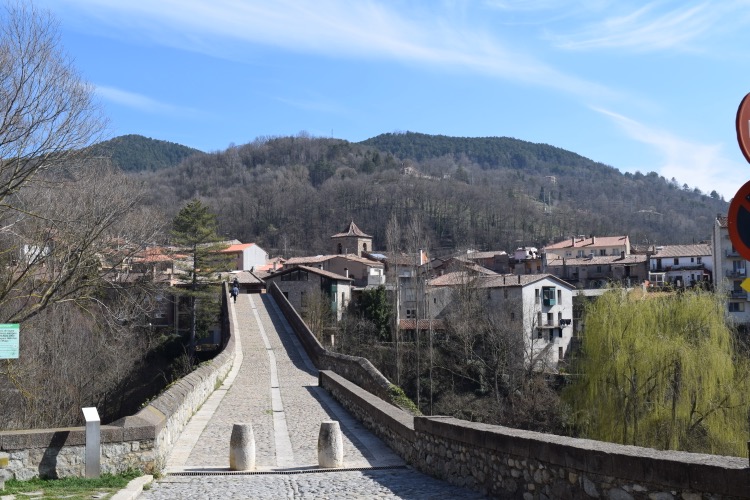 St Joan de les Abadesses is probably not a town one would choose for a holiday break. Quite unprepossessing, and other than the monastery at its centre, there isn’t much to detain the traveller here.
But the monastery was what we’d come to see, so we parked up and walked over the gorgeous 15th century Pont Vall, the old bridge over the Ter into the town. It was a promising start — the sun was shining and the river was lined with allotments and willow trees. 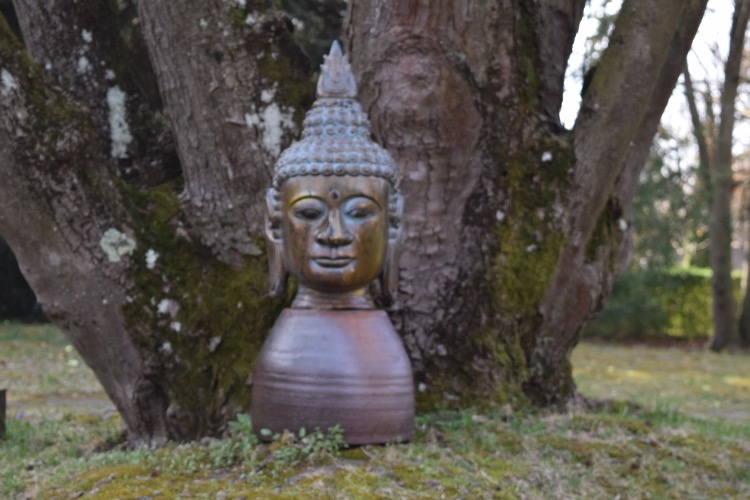 Satori B&B is tucked away on a quiet road just behind the monastery. A full sized buddha holding a lighted candle, with a pot of cyclamen at his feet, greeted us outside the front door. Francesco the owner doesn’t speak English but we got by with French as he explained we had a choice of two different rooms.

Our amazement grew as our genial host showed us around the whole of this rather large villa. Every room is packed with beautiful objects. Intricate tapestries, lamps, carpets, statues, mirrors and plants literally fill every available space.

As we toured the house and garden our host told us a little of the history of the house. A German businessman had built it during the Second World War, after his wife had been killed in the concentration camps.

From the road it looks just like an ordinary villa but from the bottom of the garden, next to the River Ter, the house resembles a castle with stone walls, buttresses and moss-covered steps. By the time Francesco bought it, the house had suffered from years of neglect, with the wooden floors rotted and the walls covered in mould.

Francesco explained that the antiques and works of art with which the house was filled had been collected during his travels around India, Thailand and Tibet. 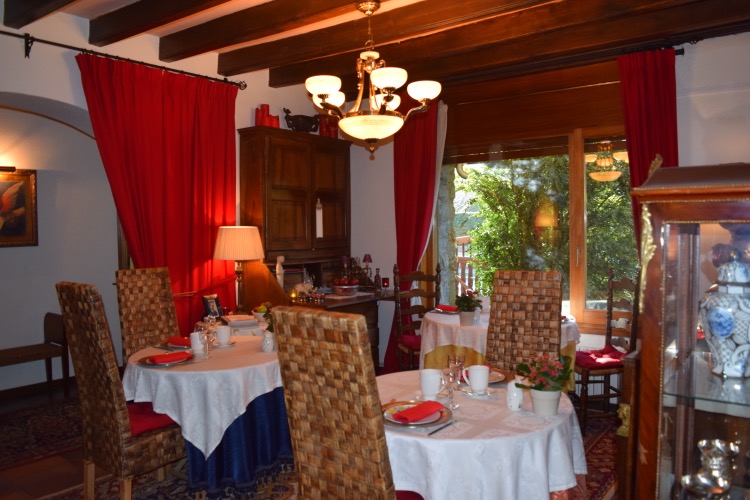 After a tour of the garden Francesco led us willingly towards the cave. Our host closed the door behind us to preserve the coolness of the interior. The walls were lined with dusty bottles of wine. He pulled a few from the racks to show us: 1925, 1964 – apparently a good year for Spanish wine.

“Do you like wine?” he asked. When we replied that we did although not experts, he showed us a small barrel. “I make this myself,” he said proudly. “It’s a mixture of a sweet white wine, brandy and oloroso.” On saying that, he filled three glasses with an amber liquid and passed us a glass each. Slices of sausage appeared, as if from nowhere.

Heads spinning from the warmth of this man’s friendship, not to mention the glass of strong alcohol, we headed for the monastery. 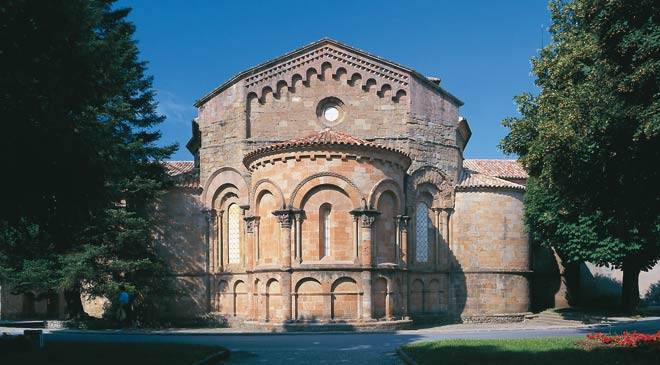 Built in the 9th century by the amusingly named Wilfred the Hairy, we found the interior of the monastery to be dark and rather forbidding.

Later generations of Hairy Wilfred’s family would enjoy power as the Counts of Barcelona and legends grew up around Wilfred to consolidate their image as rightful rulers of the region.

It was said that when Wilfred was fatally wounded in a battle against the Saracens in 897, the Frankish emperor dipped his fingers into Wilfred’s blood and painted the four bars on the count’s yellow flag, thus giving rise to the present-day Catalan flag.

The highlight of the monastery for us was the sculpture called The Descent from the Cross, a 12th century carving in polychrome wood, which could just as easily be a piece of modern art. Next to the monastery is a museum containing various 12th century works of religious art.

The tourist information centre is itself housed in the 15th century abbot’s palace, a beautiful backdrop for an art exhibition. 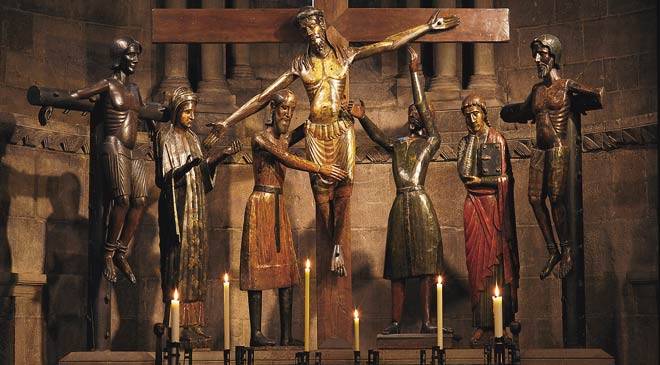 Twelve kilometres of greenway connect Ripoll with what was the mining village of Ogassa. The old railway station in St Joan is now a busy youth hostel offering bike hire. We decided to stay on foot and to tackle the shorter, 4km section up to Ogassa. This is an easy walk through beautiful countryside with the reward of coffee at the end. I’ve no doubt that there are endless walking and cycling trails from either Ogassa or St Joan and reason enough for a return trip.

Another stroll took us down the banks of the river, through a conservation area. From each tree dangled a bird box intended for the marsh tit. Despite having our binoculars we didn’t spot any, but we did spot a heron sitting patiently by the pond in the garden of our B&B – waiting for frogs, apparently. 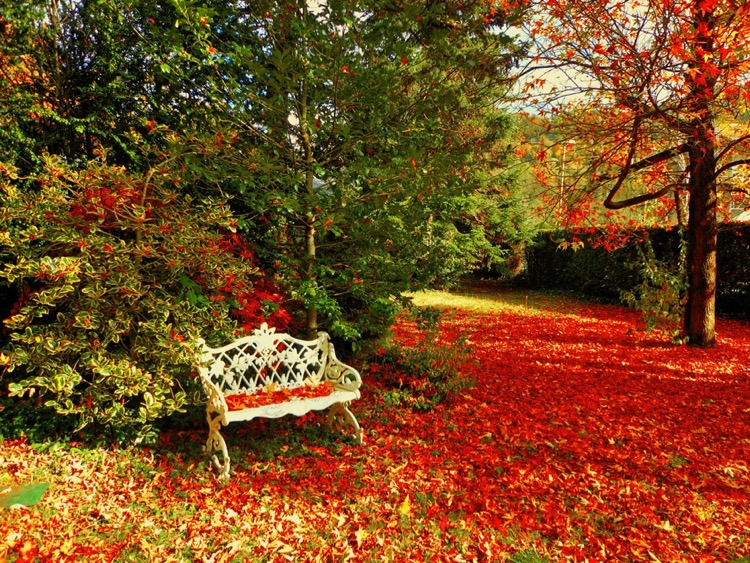 Returning to our B&B for the night we were even more amazed to see the garden – and our bedroom – lit by numerous scented candles. The attention to detail and care shown by the owner simply could not be bettered.

In the morning we sat in the comfortable lounge listening to relaxing music while our host lovingly prepared fresh orange juice, heaps of pastries and scrambled egg on toast. I can’t get over it – and my descriptive powers are nowhere good enough to get across just how unique and special is this oasis of calm and tranquility. It made our stay very special indeed.

So, the beautiful Spanish Pyrenees await us and our walking boots and there’s no doubt where we will be staying – Satori B&B, Passeig de la Plant, Sant Joan de les Abadesses.

For info: we booked through www.booking.com and paid 100€ per night for a room with private bathroom. This includes breakfast.