Darling, we’re The Young Ones!

In this first of a two part article, John Frazer-Robinson catches up with some of the younger expats in the PO and finds that even though they may lack a few wrinkles and grey hairs, they are still a pretty intrepid bunch as you can judge for yourselves….

The PO is not such a bad place to sit and watch your pension shrivel. As many of us have chosen to do. Beautiful countryside. Magnificent mountains. The sea. The sun. And let’s not forget the wine!!

So it’s no wonder, really, that hundreds upon hundreds of greys have chosen to put their Macs back in the cupboard and abandon the land of the pork pie. But wait. Some of us are not yet grannies and grandpas. They are under 40. Shock! Horror! Who on earth told them it was OK to abandon ship and leave it all up to the British Government to sort out the country?

We asked a number of the younger families amongst our community to give us a bit of background and share their ups and downs of a life in the sun. Perhaps for those of you who haven’t made the full time leap – this might inspire you to stop dithering and for those just wondering if – to make a decision. Or perhaps their experiences will hold some pointers for you, whatever your age.

Our first family story is something of a real life legend. Or at least it is in this area. Meet the Hesford family. They didn’t leave Blighty behind. They left the States after the traumatic experience of living near Ground Zero on September 11th 2001. 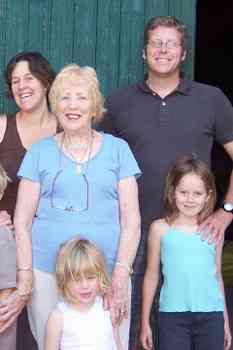 “All life-change stories need a catalyst. Ours was 9/11. We (his wife, Rachel Treloar, is a New Zealander) lived 500 metres from the World Trade Center.

I saw both planes hit the building, lost several colleagues, lived like a refugee for 3 months, lost my job and thanked my lucky stars that I didn’t go to the meeting on the 110th floor that day.

When the dust had settled, it gave us a chance to refocus our lives to do something that inspires us.

Both Rachel and I were very interested in wine and for me it had become a bit of an obsession.

We decided to become vignerons. We spent 3 years in New Zealand retraining and getting some experience but we chose the Languedoc-Roussillon to do our own thing.

It’s the most exciting wine region in France. Independent vignerons here have the opportunity to carve out a quality reputation whereas such opportunities just don’t exist in Bordeaux or Burgundy where the status quo is too well entrenched.

Add to that a very favourable climate for viticulture, quality terroir and interesting local grape varieties. With two small children – Lydia (7) and Isabella (4) – and my mother who lives with us six months of the year, it was important to choose a location that suited all of us. The Aspres region has good wine-making potential, is convenient for shops, the beach and the mountains and is also a lively area to live but set back from the busy tourist spots.

We feel very settled here and have made good friends in both the French and ex-pat communities. Our children walk to the local school, eat well at the school canteen and receive a high standard of education. At home we speak English but Lydia is fluent now and Issy is doing very well in French. We enjoy the pace of life, having got used to the long lunch hour.

The hardest thing for us has been the French administration. I know many foreigners complain about it but the level of paperwork required to run a vineyard here is about 3 times what it would be in New Zealand or England. The next problem I can see is that it will be difficult for us to step back from the day-to-day business or expand because of the high cost of employing staff.

“I don’t think we would consider going back to the UK or New Zealand. We spend a lot of time deciding where to live and I still think we got it right. In the future it would be nice to have more time to spend in those countries but for now it is full-on here”.

Now it’s the Winters on their discontent 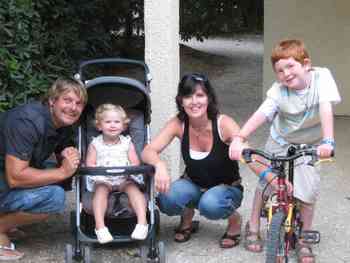 Nicola and Stuart Winter, plus Joseph (7) and Florence (2½), have settled in Prats De Mollo. As Nicola explains, “We came on holiday in 2003, my Dad lives in the area. We thought we might use a small inheritance to buy either in France or Spain. But because neither of us speaks Spanish, and my French is quite good, we chose France.

“Stu and I had not been together that long and with neither of us owning property in the UK our options there seemed limited and meant my son and I would have to rely financially 100% on my partner. In France I could buy a property and my son could go to school full time (even at the age of 2) and my Dad and all his friends said we would never be short of work doing odd jobs so we lined up a place to rent for 6 months whilst we looked around for a good location and something to buy.

Looking back, I suppose we were naive and idealistic and never accurately projected or imagined what long term life here would actually be like. We had six great months, but found our budget was just too small for the ‘perfect’ house. Eventually we found a great home, got married and had Florence.

So hard we nearly went back

Like Jonathan and Rachel Hesford, Nic and Stu Winter have found that getting a business going has been hard. “Firstly, Stu’s French is still very limited and that has made him miserable and frustrated at times.

Added to which the high cost of contributions in the first years are prohibitive but now we have the auto-entrepreneur (a new tax status for the self employed) coming in Jan 09 so that has brought new hope. The cheque emploi idea is awkward, rather limiting and certainly puts off potential clients.

“Our location is great except with the need to get back to work it is just too far from everything. Florence is at school now so it is coming time to put my degree back to work! I would love to teach or work with primary age children. My options are very limited as the concours which would allow me to get onto a teachers training course is really difficult to pass. My written French would almost certainly not be up to it.”

Understandably all this nearly tempted them to give up and return to the UK where they could both have the prospect of two good salaries and where teacher training would take only one academic year during which time Nic would get a £4000 training bursary and have fees covered and childcare costs paid. Courageously, Nicola has decided to persevere in the French school system and work her way up from the bottom, at least, until she feels her written French is ‘up to speed’.

Husband Stuart has new enthusiasm for his business, recently adding a ’Man with a Van’ service to the long list of gardening and cleaning services they already provide and now intend to advertise and market right across 66.

“Going back to the grind of the UK, not to mention the financial and economic disasters, would be a huge shock to the system so we’re giving it one last go. Moving further down the valley would make daily life less of a struggle, but the housing market is not favourable at the moment so I guess we will have to stay put.”

Nicola concludes “… yes it is nice here but sometimes it seems just too difficult, but then I am sure we have no idea of how hard life would be back in the UK”. Bon courage to all four of them.

Properly in to property 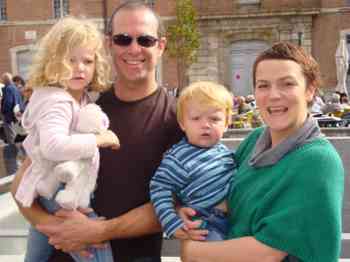 Mark and Louise Sayers (both now 37) were living and working in London in 2002. Mark in software sales, Louise as a TV researcher. Both were already feeling frustrated with life in London and both have language degrees (Mark – French and Linguistics, Louise – Spanish and French) and neither were using their languages professionally which struck them as ridiculous.

Louise explains, “In the process of looking for a suitable property for a friend, we got talking to a company who were looking for people to open offices selling property in France. We started a partnership which led to us moving to Céret in April 2003. 12 months later we left to set up Med and Mountain. Our company offers a portfolio of properties for sale as well as a bespoke search service.

We have customers of various nationalities, however we specialise in using our language skills and intimate knowledge of the system to help English speakers to buy in confidence in France.

“We chose the P-O for three main reasons – proximity to Spain (I love all things Spanish), lots of sun, and because Mark knew the area having spent a year at Perpignan University as part of his degree. Céret was too quiet for us coming from London, so 18 months later we bought our place in the centre of Perpignan which we love and find the ideal size.

“The headaches of settling here – where to start !! Being both fluent, we didn’t have language problems, however, we had all the usual problems with French bureaucracy (URSSAF etc), finding an accountant, understanding the health system, coming to terms with the French way of business, etc. We also had some legal problems to cope with but these were eventually settled out of court in our favour. On the plus side, these headaches gave us a really good understanding of the French system and how it works. We now offer a service for others who face similar problems and either don’t want to, or can’t, deal with them for whatever reason.

“Would we move back ? At present the answer is a resounding no, although never say never! At the moment we are very happy with our lives in Perpignan and although we work hard, we love the freedom of working for ourselves and a more laid-back lifestyle than we would probably have in the UK. We have two children – Rosie (3) and Joe (1) – both born here – who are growing up with the massive benefit of being bilingual, and we are delighted with the school and crèche facilities and the cost, especially compared to what friends in the UK are paying. We love being able to go the beach in summer and the mountains in winter with the children. There is far less pressure for children growing up here, the French are less materialistic than the British and we don’t feel the need to “keep up with the Joneses”.

One of the big differences between the younger couples and their seniors is the need to earn money, where many of the elder ex-pats are already retired or at least within sight of it. Owning and running a business in France, it seems, is quite a learning curve whatever age you are. The first years being made all the more difficult by the tax system, the bureaucracy and the high costs of taking on and employing staff. Elaine and I have to say that we have experienced this too and can confirm that having a few years more experience makes it no easier whatsoever.

Meet more of our younger contemporaries in Part Two. As they say, stay tuned!