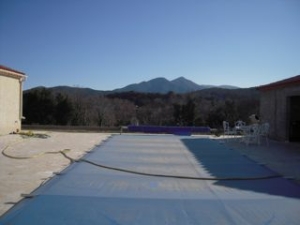 Today has turned quite windy, ’tho dry and sunny but yesterday was yet another in a long line of beautiful days in the P-O and my last day of stuffing my face before I start a diet (again) tomorrow. I hate diets – they just make me so hungry. As soon as I make the decision to go on a diet, I’m ravenous. Not for fruit and vegetables though. Oh no. I want crisps and chocolate and baked potatoes with lots of butter, and flan, and Olivier’s home made ’amandine’…….

Anyway, I have embarked on a high protein, no sugar diet, in which I have cleverly negotiated (with myself) a couple of glasses of red wine per day to keep the spirits up. How fat can wine make me for heaven’s sake? It goes in one end and out of the other doesn’t it? How much fat can a glass or two of liquid create?

A selfish and thoughtless friend brought me flying saucers, and made me eat them. Well, no, he didn’t, but yes I did. They don’t have the same texture as they used to have, the outside is rather tasteless and the sherbet doesn’t have a bite to it anymore…. but I forced them down, right to the last man standing! How is it possible to diet with temptation always around the corner?

Fortunately, everybody who is anybody knows that diets can only legally start on a Monday in the P-O so I have just used the weekend to prepare my poor thin, waif-like little body for the ordeal ahead. 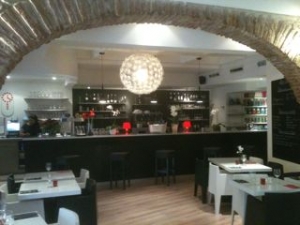 On Saturday night we went out for dinner to the Loft restaurant in Perpignan with some friends. We were amazed at how quiet the town was for a mild Saturday evening. Where is everybody? If we’d have been in Leeds we would have had to stagger through drunken hordes, queue for restaurants and bars, lose each other in the crush of sweaty sardines swaying and stumbling through the streets, obsessively homing in to the next pub, their only target. Perpignan was dead. Two tables including us were taken in this immaculate and chic restaurant, where the friendly english speaking host had plenty of time for a chat. How difficult and soul destroying it must be to put your heart and soul into a brand new venture and stare out at an empty restaurant on a Saturday night. Good luck when the holiday season swings in Jean Michel.

Here’s a little bit from the full version of the P-O Life review by Louise Sayers of Med and Mountain on the Loft restaurant in Perpignan.

“Jean-Michel Dutois, the owner of Loft Café, is a man who understands how to keep punters happy, unlike some others I could mention. Let me elaborate. Earlier this week I had a pre-arranged rendez-vous with the owner of a brand new restaurant to interview him and feature it in P-O Life. (Note from Kate….behind the Intermarché in Céret and also a well known Céret butcher… nod’s as good as a wink to a blind horse, know what I mean?) When I duly drove half an hour and turned up at said eatery, I found a bemused and somewhat chippy waitress who begrudgingly phoned the owner who was otherwise engaged and suggested I could call him later for a chat if I wished. Feeling snubbed and baffled at how a restaurant in these times of “crise” would turn away the free publicity offered by a quality publication such as this one, I didn’t really wish and left fuming. This left me in a pickle with just two days to find a replacement restaurant, eat in it and write this review. So it happened that a pre-arranged girlie lunch in Perpignan had to double up as review venue. As it happens, this was no bad thing.

Loft Café has a fabulous location in Perpignan old town, slap bang in front of the cathedral. The square here (Place Gambetta) has a very classy feel and in summer it must be a great coup to be the only bar/restaurant offering alfresco dining. As it happens, we chose the coldest day of the year to be lunching in town and the tramontane was a-howling, so inside it was. The interior is crisp, clean and stylish with an attractive bar, contemporary furniture and recent artwork adorning the walls.

It might have been arctic outside but the welcome could not have been warmer. Jean-Michel is Perpignanais by birth and looks like the archetypal laid-back Frenchman, pullover draped nonchalantly over shoulders. He is a self-confessed Anglophone, has travelled extensively in his former life as a sales and marketing man, speaks excellent English and certainly knows how to turn on the charm.”

And indeed he is absolutely charming. 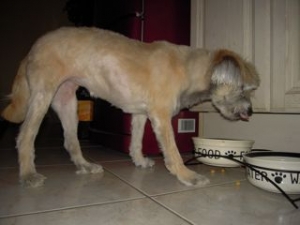 Bisou has turned into the Andrex puppy. In a completely new ’tick” she has started to unroll the toilet paper whenever we go out, eat it then bring it back with gusto a little while later. On the positive side, she had a short back and sides last week and has taken on a new lease of life!! She is still blind and deaf of course, but is bounding around like a puppy, smacking into things, has regained her interest in sniffing and snuffling and is so soft and cuddly that we just have to stop and stroke every time we walk past her. It means that we don’t get a lot done! 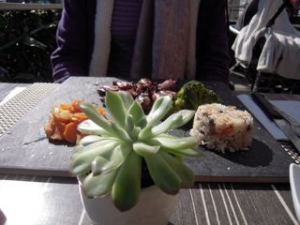 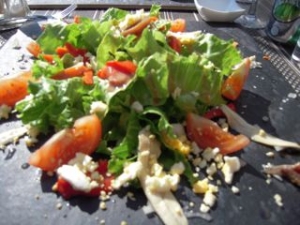 restaurant on the port called La Palabre. Reasonably priced and absolutely delicious, the owner really went out of his way to make us feel special. Complimentary roasted artichoke leaves with balsamic dip followed by calamar for Jane and a salad which wasnt on the menu, but he made up specially for me according to my directions. Delicious and would really recommend it. I even remembered to take a photo!! The cactus didn’t come with the meal by the way – it was the table centre display. Oh, and forgot to mention that we sat outside on a pretty little raised terrace, looking out at the boats in the port, and revelling in the early March sunshine. Life is so hard sometimes.

The bike ride was a pleasure until my gears stopped working round about Sorède and I was stuck in the middle! Fortunately, I have some friends (yes, I do, honest) in Saint André so I popped in and Paul, expert bike mender, sorted my gears and sent me off with a brand new bike, or so it felt. Thanks Paul. You are a star! 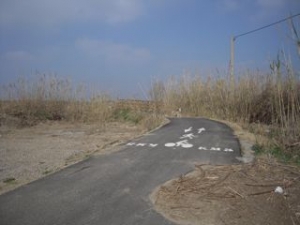 Funnily enough, the fantastic cycle and walking path that now goes all the way from Le Boulou to Argelès via a series of pretty little bridges and pathways, has been blocked off in places and they are rebuilding another path along side it? Why? There’s nowt so queer as folk eh? (Explain that expression to your French neighbours!) 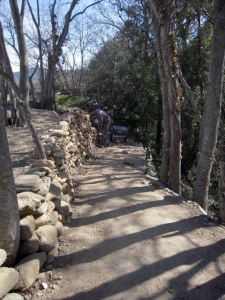 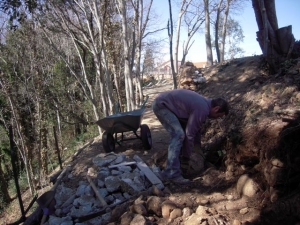 spent this sunny Sunday morning sorting through the assorted stones needed to continue with our forest path…… and now he tells me about the snakes! Hope he’s joking, cos it’s winter and I think they hibernate, but if I get even a sniff of a snake, he’s lost me for the afternoon.

A lovely morning has started to cloud over a little, still dry and bright, and warm enough to leave all the doors and windows open – which is a bonus as her Royal Hairiness smells so bad that her breath fills the whole house. Something is rotten in the state of Bisou’s little tummy as it’s like living with a garbage can, but we love her anyway. So much in fact that I wrote her a song, to be sung to Truly Scrumptious from Chitty Chitty Bang Bang, which is about my third favourite musical, after The Sound of Music and Grease and Dirty Dancing – OK my fourth favourite then. Never let it be said that I don’t have sophisticated taste. 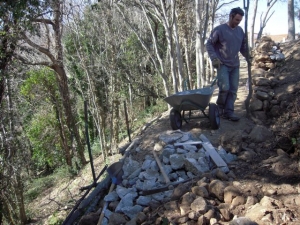 Truly Stinky
You’re truly truly Stinky
Stinky as a dustbin on the street
When you’re near us
It’s just so whiffy
Honest Bisou, smell’s enough to send us squiffy
Truly Stinky
Should wash you in the sinky
Never, never, ever go away
Our hearts beat so unruly
Because we love you truly
Honest Bisou, we do