Bruno gets uppity & the frogman

After a while, Bruno the Ram (as opposed to Bruno the Accountant) developed into a magnificent animal. He had a beautiful brown coat with a ruff around his neck, a black belly, yellow eyes full of malice and a pair of serious horns. Hubby was very proud of Bruno and often walked into the field to pet him or to give him an extra handful of food.

One day we were standing in the field while hubby scratched Bruno affectionately on the forehead. Before either of us had time to realise what was happening our ram took a step backwards, leapt into the air and crashed into hubby’s legs. Hubby went down like a ninepin and Bruno took some steps backward to get a better run at him now he was down. I helped the Other Half to his feet and we beat a hasty retreat. 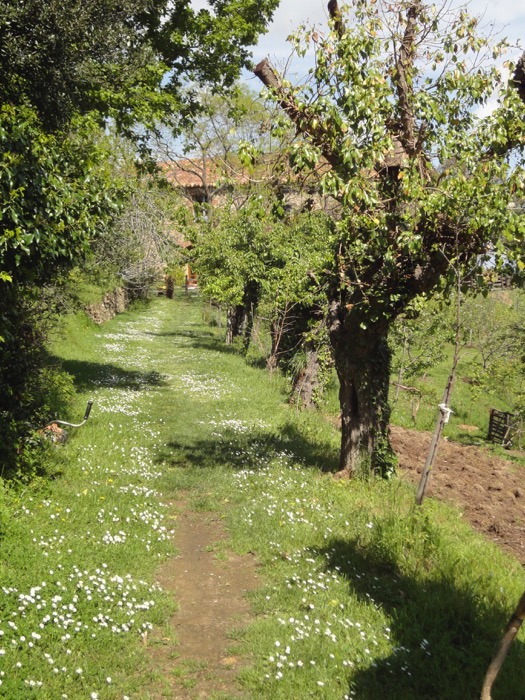 After that, we were a little more circumspect when we walked into the field. Our shepherdess neighbour told me that she never went into the field with her ram without a pitchfork and I decided to follow suit — she obviously knew what she was talking about. But Bruno became increasingly dominant until hubby was unable to move the flock from one field to another.

Sometimes we had to put the sheep in a field on the other side of the road, and usually all that was required to move them was to run in front of the flock with a bucket of feed. Bruno sabotaged this procedure. He rounded up the ewes and put them in the far corner of the field while he glowered at hubby and his bucket of sheep pellets.  It was time for a rethink. The other problem was that friends and neighbours liked to walk across our fields admiring the animals. We warned them to take a stick with them but they didn’t really believe us, one brandishing a stem of grass rather than a stick — until an elderly neighbour was felled in the same manner as hubby had been.

Since we’d sold the llamas we hadn’t seen so much of our friends Andrew and Corinne and their three children. One day we bumped into them at a party and told them about our troubles with our high-and-mighty ram. “We had an aggressive ram once, but Andrew cured him,” Corinne told us. We were all ears as she went on to explain how Andrew had taken hold of the ram by his horns and wrestled him to the ground. “After that he was quite docile,” she said.

“NO,” I said to hubby, whose eyes had lit up. “Andrew is a big, strong man with massive hands. He used to be a lumberjack, for goodness sake. You’re a weed with no muscles, not to mention your frozen shoulder.”

“Yes, dear,” hubby said. I knew I was on a loser with this one and when, a few days later, hubby informed me he had spent the afternoon arm wrestling with Bruno I was not at all surprised. “So what happened?” I asked.

“Didn’t work and half killed me,” he said.

“Don’t worry, I won’t tell the physiotherapist,” I replied.

Hubby and I stared in dismay at the swimming pool. Whose stupid idea had it been to weight down the pool cover with bricks? A gust of wind had taken hold of the cover and, as we watched helplessly a brick had tumbled in slow motion through the water and hit the bottom, corner on. So, it had happened, the dreaded nightmare – a hole in the liner with house guests due in less than a week’s time.

Hubby thought he could plug the hole with some mysterious substance stored in the tool shed but we erred on the side of caution and asked a local pool company man to come up and take a look. The day before the pool man was due to arrive hubby drained the pool in readiness. The next day we heard the sound of a van pulling up the drive and hubby went out to greet him. He was astonished to see someone in full frogman outfit, flapping up the steps to the patio, complete with goggles and flippers. “This way,” hubby said uncertainly as he led the man down to the pool.

“Merde! What have you done?” the man gasped as he saw the empty pool. “You leave the water in. I have equipment to detect a leak! Oh well, it’s done now.”

Hubby watched as the man inserted himself underneath the pool liner and moved around, searching for the hole. When the job was done the man took off his frogman outfit and remarked that he’d seen hubby before.

“I’m a  parapenter. I am often in the sky above, and you are in your pool — naked.” There was not much to be said to that one. I was only glad I hadn’t been there.

The guests left and we had the place to ourselves again. Walking across the lawn, hubby noticed a flash of yellow. Sticking his fingers into the soil, he discovered an almost-full bottle of gin. Next to the bottle was an old baguette. This was one of Gyp the dog’s burial sites — where he secreted tasty treats, smelly socks and the odd t-shirt. “What on earth?” hubby said. 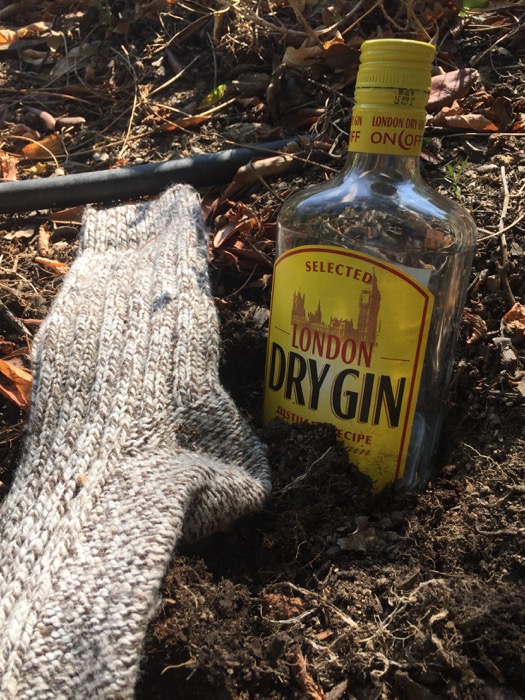 We couldn’t believe that, crafty as he is, Gyp had stolen and buried a bottle of gin. I had to email the guests to ask if the bottle had been theirs. Indeed it had. I replied to say thanks for clearing that one up, as we’d been rather mystified. The next day I had a reply waiting for me on the computer. “That’s funny. We call Gyp the Spirit Dog as he sneaks up on us so quietly whenever there’s anything tasty on the table.”

Gyp the Spirit Dog, it seemed appropriate somehow. On walks, we let Gyp run free and he often pelts off in hot pursuit of a fox or a deer, then completely disappears from view. Yet, just as we are about to go through our garden gate, there he is, at our heels, tongue lolling and tail wagging, ready for breakfast.