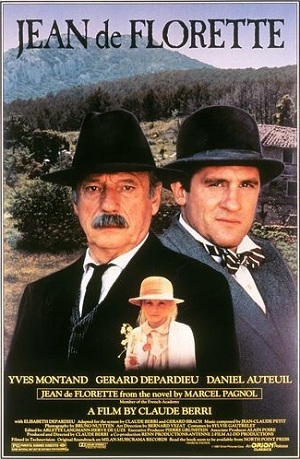 It is fortunate that I hadn’t watched the film Jean de Florette, (based on a classic novel by Marcel Pagnol) before moving to France or I might have been more cautious before buying Mas Pallagourdi. This period drama is set in rural Provence, and the plot involves two local farmers scheming to trick a newcomer out of his property. The whole thing revolves around that most precious of assets — a natural spring.

When we’d first taken over the house the previous owner had explained to us that there was a ‘source’ in the mountain above us, that this was shared with our neighbours and that it was useful for watering the garden. Of course, we were pleased to hear this, especially considering the somewhat naive and idealistic, eco-friendly haze that we walked around in at that time.

But then, disconcertingly, before he moved out in September 2007, while we weren’t looking, our friendly vendor turned off the valves for this water supply. We still had the official water supply from the town but this was metered and not half so much fun.

Looking for the means of turning the water on again, after the vendor had departed, was a bit like looking for a needle in a haystack but hubby eventually found a pit in the field which contained a mysterious tangle of pipes and old-fashioned valves. Soon the water was on again and we gaily continued to irrigate our expanding vegetable garden, which, together with the llama poo and wood chippings, was producing monster squashes and a bonanza of other legumes.

Then the water dried up. We hadn’t yet introduced ourselves to our neighbours and were a little worried about doing so in case they blamed us for using up all the water.

“Have you seen that film, Jean de Florette?” someone said when we were explaining about the mysterious disappearance of the water supply. We hadn’t, but the friend filled us in.

Hubby doesn’t like anything to defeat him and he was determined to get to the bottom of the problem. Every day he would saddle up Ulyss, the recalcitrant llama, put a bag of tools in the pannier and set off to roam around the hillside, sometimes clambering up rocky cliff faces and pushing through thick vegetation. He quickly found the huge, old water tank. This was situated a ten minute walk away, on our neighbour’s land. Whenever we went to have a look at it we took care to go the long way around, crawling on all fours through the bushes so we wouldn’t be seen. The plot of Jean de Florette had nothing on us.

But where was the source that fed it, and why had it dried up? Luckily, after about three weeks of searching, hubby had a Damascus moment. 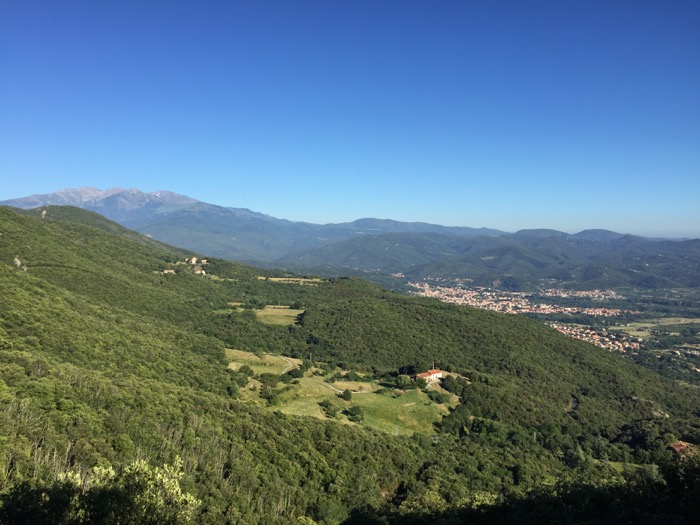 He’d tied up Ulyss and left him to graze while he stood and looked around. He was high above Mas Pallagourdi and all around there were fantastic views of the Roussillon plain and the sea beyond. An eagle flew past, almost close enough to touch. In contrast to the plot of the Jean de Florette film, there were no goats around to fall down chasms, but suddenly, hubby became aware of a large flat boulder, which seemed to be speaking to him. “Here I am,” it said.

Hubby moved the boulder aside and underneath was a shallow bowl which had plainly been excavated by hand. Water was seeping into the bowl from the surrounding rock. A pipe which had previously collected the water, had been cut into two.

The plot had thickened. Hubby came home in a state of excitement and recounted his find. But who had cut the pipe? Surely not the neighbours, who had difficulty walking and were now completely without water as they had no town’s water supply. Who else might be roaming around on the mountain top in the middle of gorse thickets and bramble? We came to the conclusion eventually that there was a simple, if rather more prosaic explanation. Wild boar were, as usual, the culprits. There’s plenty of evidence of a large boar population, if you look closely enough: water holes, large flat patches of dusty soil and telegraph poles that have been rubbed almost to the diameter of a stick at their base (the boar rub themselves against the base of telegraph poles in order to get the creosote on their fur – this acts as an effective insecticide). 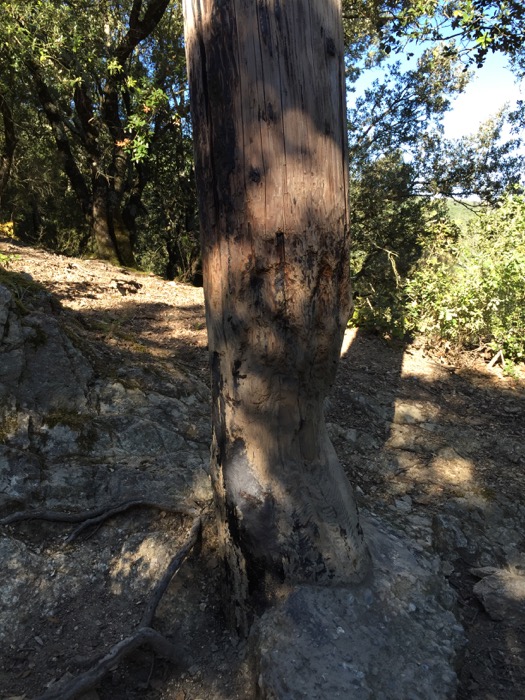 Over the course of the next few weeks, hubby lugged large reels of pipe and new fittings up the mountainside and soon there was the comforting tinkle of water once again into the reservoir.

By the following summer we were becoming good friends with our Catalan neighbours by virtue of taking them a few eggs and a few goodies from the garden every so often. One day they said, “You know, its very strange, the water from the source stopped, and now it’s flowing again.”

My modest husband never let on the fact that it was down to his Herculean labours that the water supply had been restored; we allowed our neighbours the satisfaction of telling us that it was Papa who’d built the tank. And of course, we too benefit from the huge reservoir that not only supplies us with water for most of the year but that also, by virtue of its elevation, gives us great water pressure.

We soon learned that the water from the mountain is very rich in minerals and often leaves a trace of iron behind. This means it must not be used to fill up the swimming pool as it will corrode the lining. We knew none of this of course, when we first arrived at Mas Pallagourdi.

To us, if the pool sparkled, that meant it was good to swim in. In fact, hubby loved to take a dip in those early days, after he had been strimming or doing something dusty. He took care to swim underwater, opening his eyes as wide as he could to clean them of dust and particles. After a while, he complained that his eyes were getting rather uncomfortable and itchy.

About the same time a friend who was visiting, took a dip. “It’s like swimming in effin’ grapefruit juice,” he said. “If I spent any time in there I’d lose the enamel off my teeth.”

I suppose this must have been the prompt to take a sample of the water to a local company which advertised free checks of pool water. It was still only April and so the man assumed we had not yet used the pool.

“It’s extremely acid, but of course, you haven’t been swimming in it, have you?” he said.