Gyp is a naughty boy

Sadly we had to pack our suitcases and leave Mas Pallagourdi for a while in order to attend to some business in the UK. Our good friends Steven and Adele agreed to house-sit in our absence and take care of the menagerie. Unfortunately I had neglected to tell Adele that our border collie, Gyp, liked to take himself for walks. Usually, within only a few yards of our driveway, Gyp would get the scent of wild boar, foxes, pine martins or squirrels and would disappear into the distance, yelping with pleasure. He always came back and we did not worry too much about it. 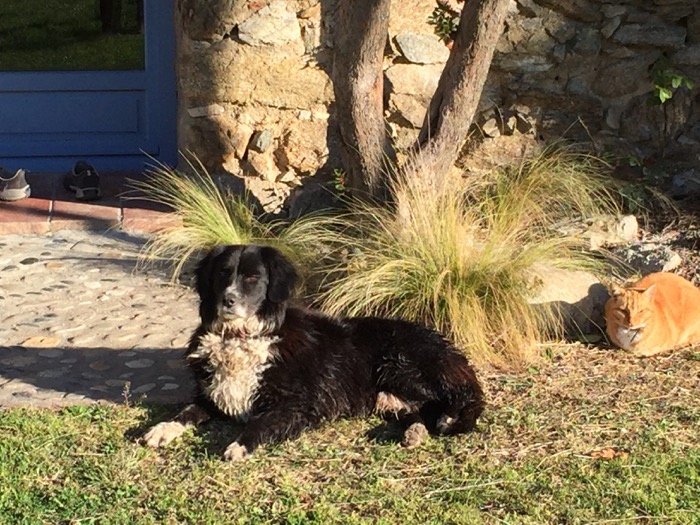 On her first day of looking after him, Adele took him for a walk and let him off his lead. She was not to know that our neighbour’s flock of sheep were contentedly taking themselves for a walk and a tasty browse, along the road at the same time. All pandemonium broke loose, with Gyp in hot pursuit of the sheep, the sheep running for dear life, and everyone pursued by my 85-year-old shepherdess neighbour who was banging a saucepan lid just to add to the din. Adele felt very embarrassed and Gyp had to walk on the lead after that. 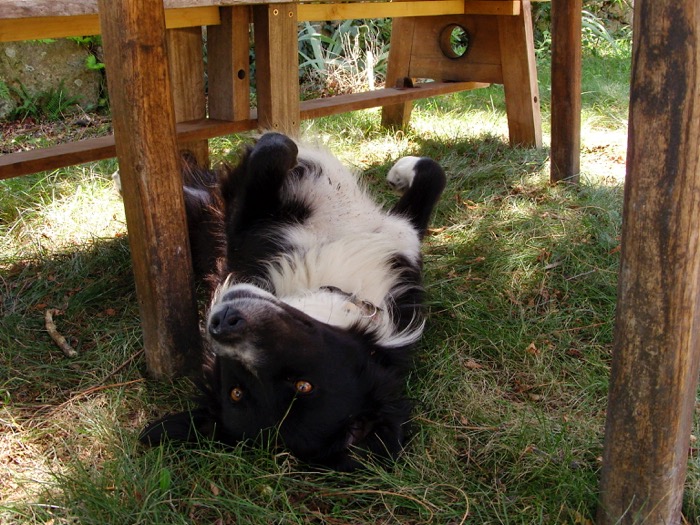 In the early days, we had been ‘talking’ to our shepherdess neighbour in broken French/Catalan/English when she had told us her son was called Raymond. Since that time we had cheerily called out to him when he went past in his car or we bumped into him at the market. He was always friendly and smiling but we had never really talked. Now, a day after our return from the UK, Raymond was striding across the lawn in a purposeful manner and my heart sank. I was sure that he was going to give us a good telling off for allowing Gyp to chase his mother’s sheep and I put a fixed smile on my face as I went out to greet him.

“Bonjour, Raymond,” I said, as cheerfully as I could muster.

“Quoi?” I replied, looking over his shoulder to see if he had brought a friend along but there was nobody apart from hubby, whom I gesticulated to, for him to come and help me out of this awkward situation.

“Alain,” he said again, a little more forcefully this time, and pointing towards himself.

After this bad beginning (but after all, now we knew what his name really was, that was progress, wasn’t it?) Alain proceeded to invite us for Sunday lunch with him and his mother the following weekend. “Are you sure you will come?” he asked.

“Yes, yes,” we said, and looked at each other goggle eyed at the prospect.

All that week we wondered what gift would be appropriate and I wondered if I would find enough French words to sustain a conversation all through a meal. We decided to take a cake and a bottle of wine, if we could all get drunk then nobody would care who could speak French and who couldn’t. At 11.30 on Sunday morning we put the goodies into a rucksack and walked across the fields to our neighbour’s house. All seemed very quiet, and we were a little concerned to see that Alain’s car was not there. We shouted up the concrete steps to his mother’s side of the house and banged on his door, but the place seemed to be deserted. We decided to beat a hasty retreat before anyone appeared and we had to make awkward explanations in French along the lines that we thought we had been invited for lunch. Back home, we heaved a sigh of relief and treated ourselves to toasted cheese, cake and wine.

While passing the time of day with some friends, we discovered that they too had been lucky enough (not) to make the acquaintance of Screenwriter Man. If you remember, he had (according to his partner) tried to poison her and while she was in hospital he had used her cheque book to buy a brand new 4×4. When the cheque bounced he had been carted off by the gendarmes (after causing a bit of a ruckus and a fight or two). His partner had come out of hospital, changed the locks and thrown his clothes into the swimming pool. After a night or two in prison SM had taken up residence at a local camp site, transporting himself there in his ex’s car. Our friends owned a house that was near said campsite and, unaware of all of this, they were soon being brought little gifts every day by SM, who spun them stories involving writing scripts for Hollywood etc. Bizarrely, every day the gifts consisted of the same things, a yogurt and a single flower. One day he was sitting in their kitchen when the gendarmes rolled up. “We’re looking for XYZ,” they said. “He’s wanted for stealing someone’s car.” Friend and her husband looked at each other, unsure what to say, but SM revealed himself and was once more carted off to a French jail. We all hoped this would be the last we would see of this con-man.

My French friend, Jo, asked me if I would like to accompany her on a mushroom-gathering trip. I arrived at her house to find her getting her open-topped sports car out of the garage, and another French friend standing waiting with her mushroom basket and pen knife. Great, I thought. With these two experts we are bound to find some lovely mushrooms.

We sped along the country roads, the wind rushing through our hair. The scenery was fantastic and as the road climbed gradually into the mountains we could see as far as the Med in the distance. Jo parked at the edge of a lush, green forest. The two women lifted their noses into the air and sniffed. I watched incredulously as they rotated their heads in each direction and decided that the mushroom smell was most definitely coming from the east.

We walked up the forest track, meeting only one other person.

“Out looking for mushrooms?” he shouted cheerily.

“That way,” he said, pointing west.

“Thank you,” Jo and friend replied. “Hmmm,” Jo said as we watched the figure disappear down the track. “If he is saying that way, we must go in the opposite direction. Keep an eye out for any signs, Marian.”

“Like what?” I said, getting more puzzled by the minute.

“Tins hanging on trees, a bit of rag, anything like that.”

In the end it was a tuna tin hanging from a branch that gave the game away. We left the track and ducked under the branches for a good ten minutes before we saw the carpet of golden chanterelles spread under the trees.

I had not realised that mushroom hunting in France was such a cloak and dagger affair. At this rate I would be digging up truffles next!