Bill was anxious to fence the land so that we could have animals. After all, this was one of the main reasons for us moving to France and buying a place with six acres. The vague wave of the arm and words of the previous owner, “it’s over there somewhere” had not really helped to clarify where the boundary actually was. And we were far too scared to ask the neighbours who had been watching our every move through binoculars. 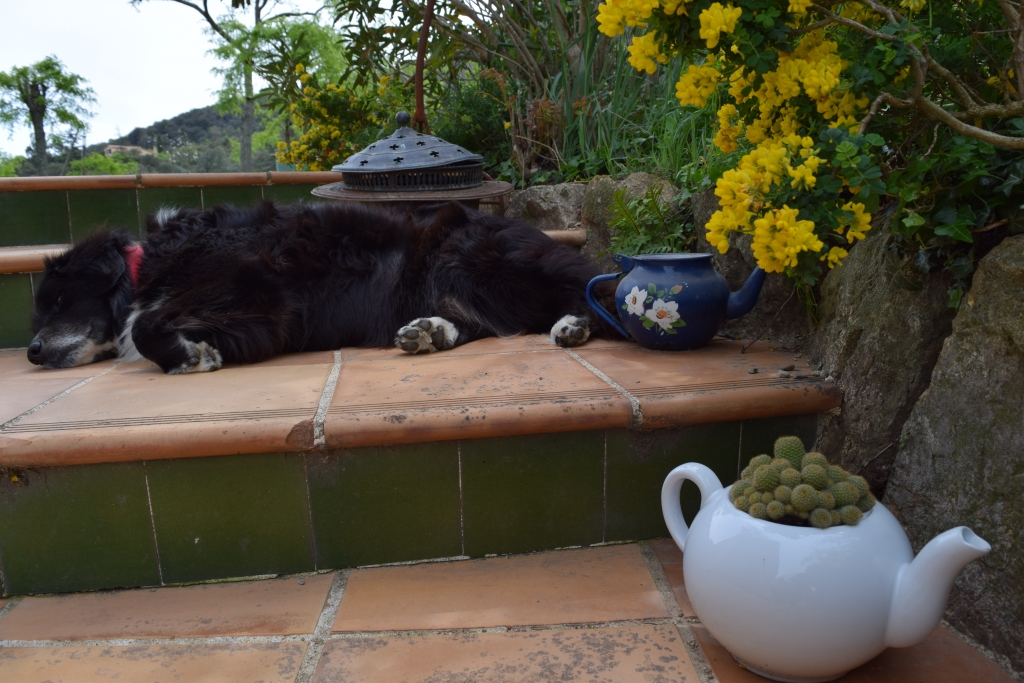 The time had come to sort the problem out for once and for all. We hired the services of the local geometrist. Rene, a portly and affable man, knocked on our door one day in the spring of 2008 and explained that his role would be to use GPS in conjunction with cadastral maps from the Mairie to stake out the boundary. He would then draw up a map and get this signed by all of our neighbours. The price would be 2500 euros, a hefty slice out of our renovation budget, but we thought it would be worth it and agreed.

The following week Rene set to work and soon there was a line of orange stakes snaking across the field and along the edge of the wood. We were very pleased to see that our land extended even further than we had hoped, but one day while Rene was at work, I heard some commotion outside. I looked out of the window of the upstairs room where I had been busy working and saw our jolly geometrist packing his equipment into his car. The next minute his car screeched down the drive and disappeared in a cloud of dust.

We are not sure what happened to Rene, whether he decided it was too onerous a job or something more sinister, but we never saw him again. The upside of this was that we didn’t receive a bill either. The map had not materialised but we did have the exact boundary marked out and Bill set to work fencing the land. This involved digging quite deep holes by hand, placing the post and then concreting it in. After a week or two of this Bill decided he needed extra equipment to help with the task and purchased a tractor with a post hole borer attachment. When this arrived it turned out that the land was too rocky for the mechanical equipment, so all 150 posts had to be installed by hand after all.

Adele and I had organised French lessons with Lilian who came to one of our houses each week and required us to learn a short script by heart and then act it out. These scenarios took place at the shops or at the cinema and made us feel about 13. When Bill came to collect me one day she castigated him for not joining in. “I’ll teach you a useful phrase,” she said to him. “Je suis en pleine forme.”

“What does that mean?” Bill asked.

“It means, I’m in great shape,” she replied. “And I will want to hear it next time I see you.”

To my surprise, Bill took his homework seriously and I saw him repeating his phrase to himself as he went about the garden, planting fruit trees and working on the new vegetable patch.

One day I was working on the computer when I became aware of Bill coming in and going upstairs, muttering that he had crushed his finger in the tractor. I followed him and entered the bathroom just in time to see his legs buckle and his head hit the tiled floor. He was out cold and I was convinced he was dead, he certainly looked it.  I slapped his face and shouted at him to wake up. After a few minutes, which seemed more like an eternity, some colour washed back to his face and his eyes opened. “I’m alright,” he said.

“Stay there and don’t move,” I replied.

I dialled the emergency number and tried to tell the person on the other end of the line that my husband was lying on the floor, having had a heart attack. To my relief I was put through to an English speaking doctor, who told me to raise Bill’s legs and he would despatch the pompiers.

Bill’s legs were far too heavy to raise and while I was trying to do this all he could say was, “I’m alright, leave me alone.” Giving up on the leg raising I ran outside to intercept the pompiers. As I stood at the end of our driveway, I could hear in the distance the faint sound of the ambulance and heaved a sigh of relief. Gradually the sound grew closer, but then it became fainter again until I could hardly hear it. Where on earth were they going? Had they taken a wrong turning? I hopped up and down with anxiety, hoping Bill was ok lying on the bathroom floor, but I had to stay put.

After what seemed like an age, a fire engine appeared. Six fit young men jumped out and raced through the house. Bill was still lying on the floor and still protesting that he was alright and should be left alone. But he was gently brought downstairs and tested with various bits of equipment while I watched nervously. A doctor was summoned and a young woman appeared who also examined him. “We want you to go down to the clinic for an ECG,” one of the gorgeous young firemen said. So Bill was carted off in the fire engine to the clinic, while Adele and Steven, who had arrived in the meantime, gave me a lift down in their car. The ECG was done and showed that Bill’s heart was fine. The doctor asked the prone figure on the hospital bed how he felt. Suddenly a head popped up and legs swivelled around, feet on the floor. With great aplomb my husband produced his one and only French phrase: “JE SUIS EN PLEINE FORME.”

As Easter approached we awaited the delivery of oak floorboards for the yoga studio, as well as window frames from a carpentry firm in the next village. The lady who owned this enterprise,  Madame Vidal, was very friendly and although her English was already good she was interested in learning new English words. On every visit she would ask us again to say the word “hinge”. When we laughed at her attempts to pronounce it she would waggle her finger at us and say, “Ah, but you cannot say cairou,” which was very true.

After Easter we were invited to the house of an English couple who lived on the other side of Ceret. At the end of the meal and a few glasses of wine our host pulled out a large wad of paper, saying this was his screenplay, and could we all take a part and act it out?  Being befuddled with alcohol we complied but the script was terrible (although the acting was probably worse). We thought this experience a little odd but had no idea how much odder things would become with screenwriter man and his partner.

Lessons with Lilian continued, with my friend Adele and I having to act out little scenarios. Lilian told us we were her best students which made us wonder what the others could be like. We were not sure if the method was working or not, and we wondered whether we were being taught rather old fashioned phrases. When Adele had tried one out on her French neighbours they had fallen about laughing. Maybe it was time to find another teacher.