The affair between the elegant girl from Tallinn and Estonian Eric had, unsurprisingly, come to naught and the love-less, opera-singing soldier man continued to appear at odd intervals at Arthur and Jo’s house to dig out the odd tree root or two.

After he’d chopped down the cellar door with an axe and refused to hand over the house key, saying it was his, Jo and Arthur had a row. Jo was still feeling protective towards her protegé, but on this, rare, occasion, Arthur put his foot down and gave Eric his marching orders. We all heaved a sigh of relief.

A fierce thunderstorm started overnight, I couldn’t believe it when hubby continued to snore loudly through most of it. It continued the next day and for good measure sent down some hailstones which turned our plants into sieves, with little holes punched in the leaves. By evening it had calmed down, which was fortunate as I had arranged to have a meal with friends and friends-of-friends in the Place de Neuf Jets in Ceret. 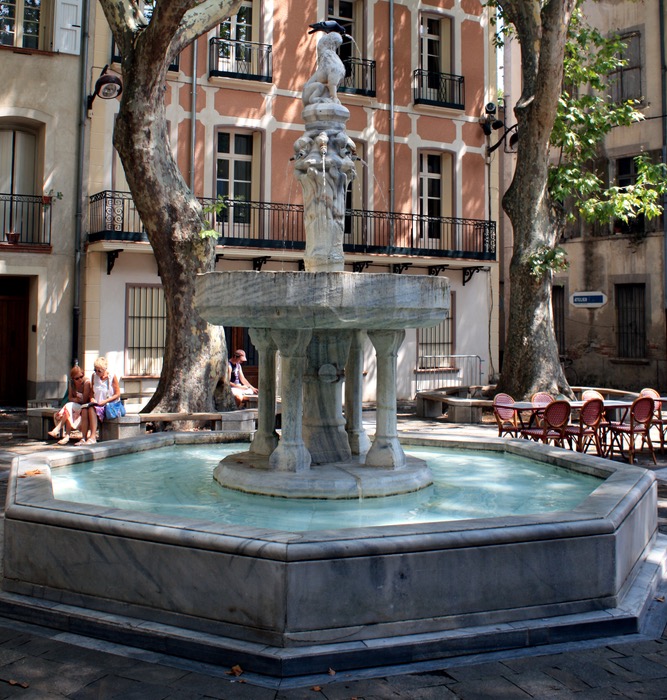 The Place de Neuf Jets is a historic square, in the centre of which is a beautiful fountain topped by a sculpture of a lion. From the body of the lion come the water jets which give the square its name, the ninth being from the lion’s mouth. It’s said that when Ceret and Roussillon belonged to the Kings of Aragon and Majorca in medieval days, the lion’s head faced Spain, but when it became French in the 17th century, it was turned towards France. At a later date a fight broke out between some visitors from Barcelona and some locals, which resulted in the lion being decapitated.

The tall buildings with crumbling balconies and intricate ironwork which surround the square are down at heel in a way that can only be done with panache in the Mediterranean countries. Together with the reconstituted lion, they are an excellent backdrop to a summer evening’s meal.

I had a lift down with two of Arthur’s friends and found the rest of the party already seated at one of the three restaurants to be found in the square. I found myself seated next to Gordon, a wiry 69-year-old American guy in a black cowboy hat. Our mutual friend told us he was a CIA agent, specialising in extricating Americans from tricky situations, war zones and so forth. I did not get to hear any of this as he was quite taciturn, but he did tell me that in Syria he’d had to eat giant cockroaches. What did they taste like? I asked.

Led by their ringleader Blackie, the entire flock of sheep escaped through a gap in the fence and I found them next to the open gate into the garden, munching happily on the wild flowers we’d sown next to the veggie plot. 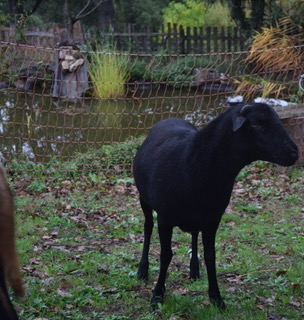 I shouted to hubby, who was in the field on the tractor. “Get them off my effin’ vegetables,” he yelled as he switched off the ignition and swung his leg down from the tractor seat. Blackie was standing defiantly in the middle of the beetroot patch, almost inviting a fight. 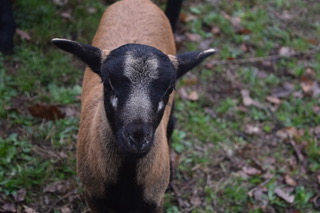 Unfortunately, as hubby clambered down from the tractor, in his haste he hadn’t noticed that his boot laces had become tangled. He ended up face first in a patch of nettles. While this was going on, Whitey was busy eating all the lettuce, kale and beetroot tops. Maybe this what she needed to give birth, as the following day she had a lovely little brown lamb.

Someone had donated an elderly goat called Thelma to the menagerie. We were not at all sure whether Thelma was a boy or a girl as she/he had horns, a beautiful long black beard and an udder, but we put him/her in the same field as the sheep, thinking they could keep each other company. Thelma was not impressed with the sheep and tried to butt them when they came up to investigate. They soon learned to steer clear of her and Thelma walked up and down the fence, bleating loudly. 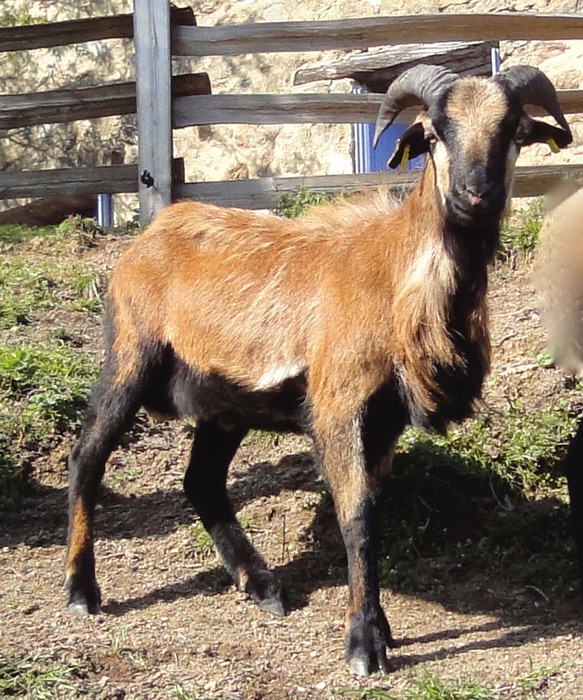 After two weeks of this we’d had enough. We decided to catch her and put her in a different paddock, one further away from the house, where hopefully we wouldn’t hear the racket. 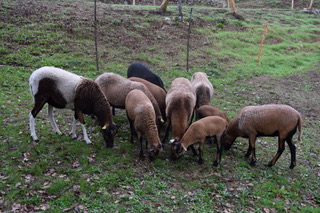 If that was our idea, it most definitely wasn’t Thelma’s. After a couple of frustrating hours of chasing her around the field, hubby came up with a plan.

We would trap her in a corner using a roll of sheep fencing. We advanced on Thelma, each carrying one end of  the roll of the plastic netting. “Is that on?” I asked hubby, looking down at a strand of electric fencing nearby. Before he could answer, the metal ‘foot’ of the fencing we were carrying touched said electric wire. 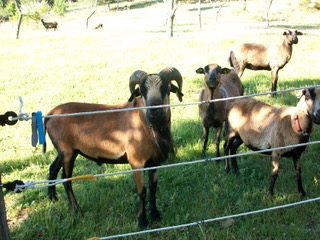 By this time we had just about enveloped Thelma in the netting and all three of us shot into the air as we received a hefty blast of electricity. Thelma screamed, we screamed and all three of us fell into an ungainly heap. Just thank goodness there were not any neighbours passing by.

It was mid-summer and we’d arranged to rent out the whole house. I’d spent the previous three weeks frantically cleaning, polishing and stuffing various things into the attic and now the house gleamed.  As usual for the time of year, the weather was unsettled with rain, thunder and lightning.

Three days before our guests were due we received an email from the globe-trotting son, who told us he’d be flying into Barcelona airport very soon. This was after two years cycling from the UK through Europe to Iran, India, Myanmar and Thailand. As he would be bringing his bike and a whole load of gear he needed us to collect him. Hubby was rather worried about driving to Barcelona airport but someone had to do it. We plugged in Arthur’s GPS and hoped for the best. 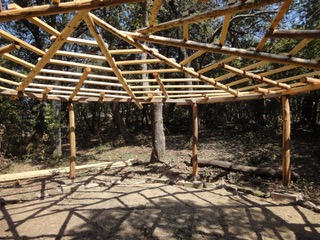 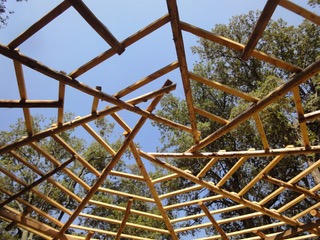 I hadn’t until now really seen the point of hubby’s straw bale house other than as an interesting exercise, but now I was profoundly grateful. At least there would be somewhere for David to sleep and he wouldn’t have to share the yurt with us. Two years of cycling around Asia hadn’t done much for his BO. The trouble was, the straw bale house hadn’t been intended for occupation so soon, the main problem being that hubby was still in the middle of trying to create a lime floor. 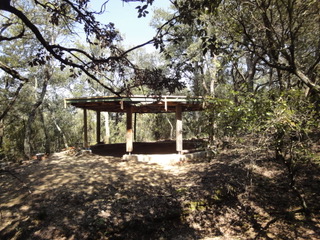 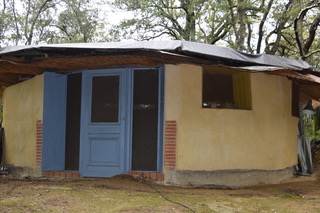 Despite this we spent the next few days carrying a bed from house to the woodland, and a walkway to the bed made out of yoga mats. Hubby worked at double speed to put in a window and some anti-mosquito netting. After a fraught journey to Barcelona airport the son was collected and he moved into his new abode.

The next day the house guests arrived and, luckily, were out when a huge sludge of sewage started flowing out of the septic tank towards the swimming pool.