Laurel & Hardy get on their bikes

If you remember, hubby and I had pitched up in Ceret on our bikes as part of a planned journey through France. This hadn’t really gone as hubby had expected as we’d only cycled as far as Perpignan. Looming mountains and an idyllic run-down old mas had got in the way. But after buying Mas Pallagourdi and buying ourselves four-wheeled transport, we had vowed to keep using our bikes and to cycle up our hill at least once a week. As you may have expected, this hadn’t happened either. 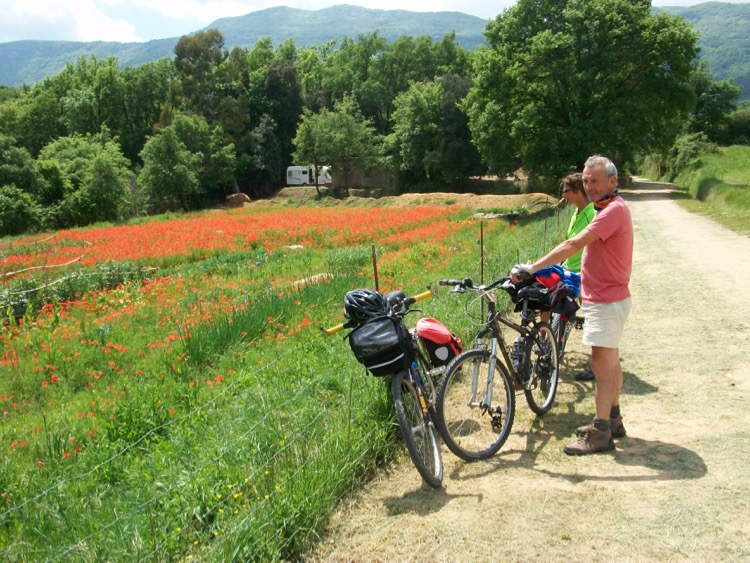 One winter we decided to dust off the rusty old bikes and I dug out those unused maps. A spring-time adventure was needed.

We invited my cycling-enthusiast brother and with some trepidation I started practising.

By the time April arrived I could finally cycle up the hill without getting off to push, the weather forecasts were good and the brother arrived. The plan was to cycle from Mas Pallagourdi up the Vallespir Valley and over the Col d’Ares into Spain on the first part of an itinerary that would loop back home over the course of five days.

I was fairly confident it was do-able but was a little anxious that on the final leg there would be a route over the mountain above Las Illas, but the other two seemed confident in my planning abilities so I kept my worries to myself. On the day of departure I was perturbed to see hubby in the garden fixing up his bike – he hadn’t been doing any practising and the bike hadn’t been used for years. He’d previously told me he had no need of panniers and I looked doubtfully at the carrier bag he had strapped to the back of his bike. So off we set.

By the time we’d reached the bottom of our hill hubby realised that his carrier bags were banging into his legs and he had to strap them up in a big bundle using a bungie strap which, luckily, I’d bought with me. He also realised that the new back brakes he’d just put on had shot off into the ether. Undeterred by these minor setbacks we had a relaxed lunch stop at Arles sur Tech and a mid afternoon refuelling stop at a little hostelry half way to Prats de Mollo.

We arrived in Prats about 4 and at this point hubby realised he had lost his wallet. I left the two boys relaxing in the sunshine with a coffee while I rang a taxi and went all the way back to Arles. No wallet. Got back to Prats and asked the two boys, who’d obviously not moved in the intervening couple of hours, if they’d searched their bags thoroughly? They smiled lazily at me over their coffee cups and said they had. 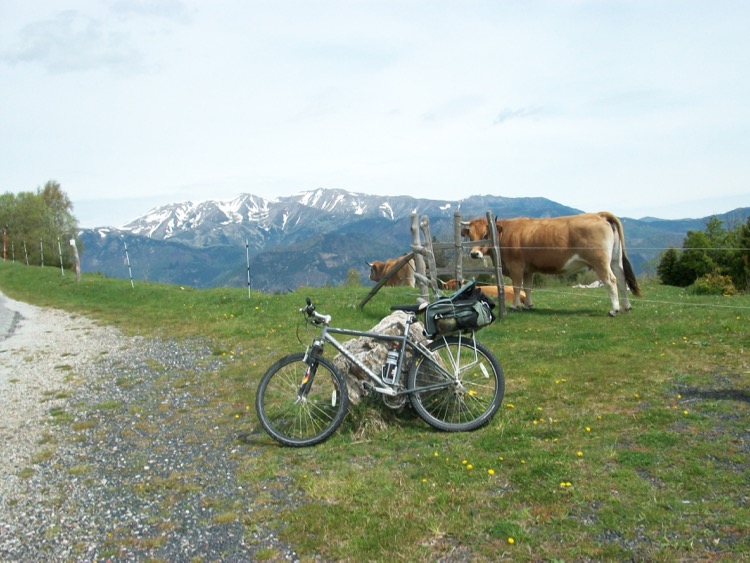 Leaving the pair toiling slowly behind me I cycled up the remaining 7 km to Brigitte’s house in La Preste, where we’d booked a couple of rooms for two nights. Breathlessly I asked her to help me cancel both our French and English credit cards.  Once done I could relax and enjoy exploring this tiny village perched at the head of the Vallespir Valley, surrounded by forest and mountain peaks.

The next day we ventured forth for our pre-booked treatments at the spa at La Preste. Never having done this before all three of us were rather intimidated by the Russian-hospital feel of the place. After standing in various queues we were taken to a small reception area where we were told in sign language to change into our swim wear and were handed various garments to put on. I emerged from the changing room to see Laurel and Hardy lookalikes with stupid grins on their faces, waiting for me.

My rotund brother’s shiny bald pate was adorned with a lacy white cap, and my weedy husband’s feet were encased in fluffy slippers. The look was completed by white towelling dressing gowns. They looked at me sheepishly. We followed a sniggering attendant to the pool area and filed dutifully into the pool. Taking our places at numbered spaces around the pool we awaited our instructions.

Unfortunately, the pool attendant/instructress found the sight of the three of us too funny for words and was so busy doubled up with laughter she was hardly able to tell us what to do.  After this disconcerting experience Laurel and Hardy were led away by two battle-axes dressed in plastic green aprons. In our separate cubicles we were covered in mud, wrapped up in clingfilm, squirted with water jets and rubbed down. We all emerged feeling great. 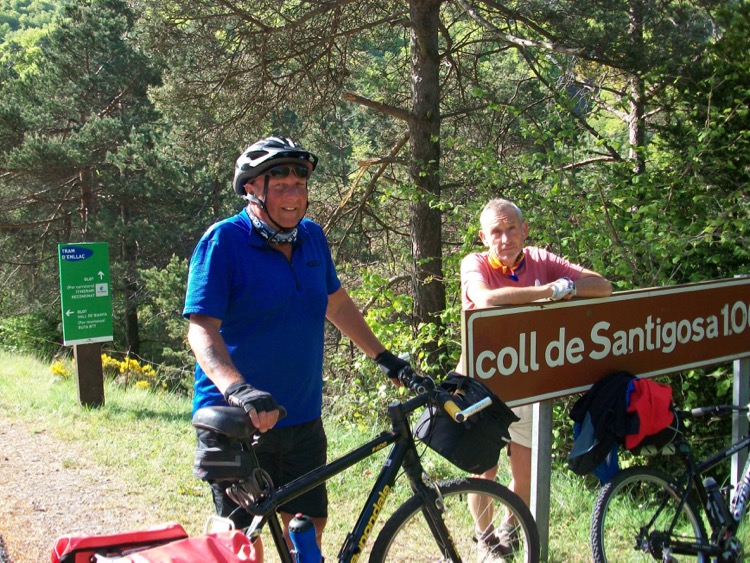 The next day was the tough one but cycling over the Col d’Ares wasn’t as difficult as I’d imagined it would be; all that training had paid off. The ride down the other side was superb, although I was a little concerned about no-brake hubby. We stayed the night with our friend Bezerkas Circus in St Joan d’Abadesses, a quaint town high in the Spanish Pyrenees.

The next day we left Saint Joan and cycled through the volcanic national park of Garrotxa, over a couple of minor cols, reached Olot by lunchtime and in the afternoon set off down the green cycleway from Olot to Girona. Happily, this 57 km route is downhill all the way, from 440 m to 70 m. It’s possible to sit back and just glide downhill without even having to apply the brakes. The scenery is splendid, passing through poppy fields and forested hills, small towns and rivers.

The cycle track continues through the outskirts of Girona, past allotments and through the centre, to the hostel where we’d booked rooms. It was while unpacking his gear in the hostel that my brother discovered hubby’s wallet at the bottom of his pannier.

The following day was not so straightforward. It started well with the appearance of some unexpected cycle track signs just outside of Girona pointing in the direction of Figueres. With relief we left the main road and headed into the countryside. Before long we were climbing off our bikes and refuelling (in the brother’s words) at a kind of bar which sold enormous sausage sandwiches.

Thus fortified we continued on our way but the signs had mysteriously disappeared.

In the middle of dense woodland we came across a place where the track divided into three. All three were, in their turn, investigated and the upshot of this was that we found ourselves in the midst of a prickly gorse forest, totally lost. The path had narrowed and we had to unhitch our panniers, carry the bikes forward and then return for our packs.

Exhausted and muddy, we espied a dilapidated farmhouse where a dog was barking ferociously. Laurel and Hardy conferred and the decision was taken that to get out of this fine mess we had to brave the dog.

They stood a good distance back while I knocked at the door, but the place seemed deserted. Eventually an old woman poked her head out of an upstairs window. We waved our map at her and she came down to open the door, babbling away in Spanish. Then she shut the door and the place went quiet again. We wondered whether to cycle off but that seemed rude. The dog looked at us in a hangdog fashion and we looked at each other, unsure what to do. After a while we heard a lot of shouting — something to the effect of  “Get out of bed, you lazy ….,” and a male voice shouting back “Get off my back you old hag!”

A few minutes later the old woman reappeared, smiling and babbling away. We made polite noises and started to get back on our bikes. At that moment a young woman dressed in overalls roared up on a motorbike. She was the old woman’s grand-daughter. We hadn’t realised that the kindly old woman had summoned her from milking the cows to help us.  Thankfully, she spoke English and even offered to escort us back to the path. We followed her instructions and after a few more wrong turnings and curses from Laurel and Hardy, we arrived in Figueres in early evening.

The final day’s ride took us along tiny country roads from Figueres, past the lake at Darnius  and then to the tiny village of La Vajol on the French/Spanish border. This was a very steep 5 km climb: pushing laden bikes in 30 degrees was hard work but we were rewarded at the top by the sight of a busy restaurant — just right for a refuelling stop.

From there the road climbed a final 2 km to the col, taking us past the monument to the Retirada (when thousands of Spanish had crossed the border into France to escape Franco). I was extremely relieved to see that the road at this point became a track which led downhill to Las Illas. From here we were back on familiar territory, a steep rocky path led us directly to our back garden.

Would I do it again? Yes, if I could summon the energy. I would make two changes though. I would carry spare brake pads and I would have more rest days. Not to have had a rest day in Girona was just plain silly. The greenway from Olot to Girona is simply wonderful and if you don’t fancy cycling up the Col d’Ares get someone to drive you to the start, it’s well worth the effort.