Well, nobody can say the French Presidential Elections 2017 have been dull and predictable!
Emmanuel Macron has gone through to the second round on May 7th with 23.9% and Marine Le Pen has gone through with 21.4%. Neither have any experience in public office. 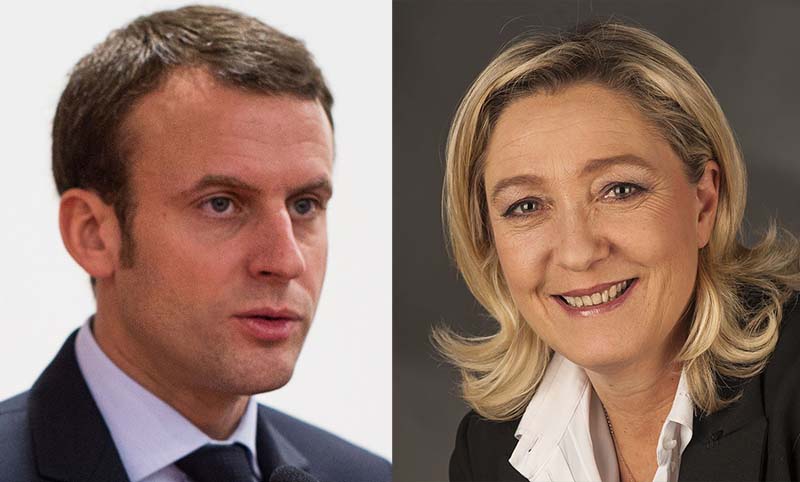 Once the votes are counted on 7th, the ‘swearing in’ usually takes place a few days later, and the French must return to the polls to elect a new National Assembly, as the  parliamentary elections begin. Similar to the presidential, there are two consecutive Sundays of voting (11 and 18 June), which can have an enormous effect on the future president’s power.

If the president’s party fails to win an absolute majority and is unable to pull together a coalition with smaller parties, he must invite his political opponents to form a government, known as a ‘cohabitation’.

The new president will have two main issues to address – security and economy. He or she will also have a large role to play in Brexit.

So how do these two wannabe presidents compare on issues likely to affect British ex pats in France?

On Europe
Le Pen
My way or no way.” She will pull France out of the Euro, close the borders and back ‘Frexit’. She has been quoted as saying that in a referendum, she would resign if the French public voted to remain

Macron
France will work closely with Europe, should remain at the heart of Europe, cautious but working closely with its neighbours. A free-trade supporter, he believes that the eurozone should create its own budget.

Macron
Keep borders open but with stricter controls.
Refugees made welcome, France should do more for the migrants.
More discussion with rest of Europe to solve these problems.

Macron
Cut corporate tax rates, local housing taxes and reform the wealth tax.
Cut public spending by 60 billion euros a year, by not filling positions of 120,000 ‘fonctionnaires as they retire.
Billions to be spent on training, energy and the environment, transportation, health and agriculture.

In a nutshell, whichever wins the race, France’s next president will be inexperienced and is likely to minimal party support

The first round of the 2017 French presidential Election will be held on 23 April 2017 and the second round in May.
Following closely on the heels of Britain’s Brexit and the election of Donald Trump as US president, it will be interesting to see just what kind of politician France will choose for its new president.

♦Voters must be French citizens aged 18 or over.

♦The election nearly always has two rounds because it is very unusual for any candidate to win an absolute majority, of 50 per cent of the vote plus one.  Although this has never actually happened,  Charles de Gaulle came the closest in 1965, when he won  44 per cent in the first round. The top two candidates from the first round will go through to the second.

♦Elections are always held on Sundays.

♦After the election, the new president will be sworn in, and live (or continue to live) in the Elysée Palace in Paris.  In June, French voters will again go to the polls, this time to elect deputies (equivalent to members of parliament) which should in theory give the new president the majority he needs in Parliament ( l’Assemblée nationale)

Initially one of the favourites, this Thatcher fan, whose main promise is to cut down on France’s enormous ‘fonctionnaire’ pool, has been surrounded by scandal and controversy over past months, severely damaging his presidential chances. However, he is not out of the race yet.

Daughter of holocaust denier Jean-Marie, National Front candidate and former lawyer Marine Le Pen has popularised the National Front in France with a softer approach to her father’s hard line policies. At present, she is being seen as a strong contender for the presidency, though experts say that whilst she might get through the first round, it is unlikely that she would win the second.

Relative newcomer and founder of the new centrist party, En Marche (On the Move), Macron was advisor to president François Hollande .
He has called for a “democratic revolution” but as yet has not provided a game plan for going about it.
He describes himself as ‘neither of the Left or Right….but for France.’

Despite being eligible, present president François Hollande declined to run for a second term. Leadership of the party was taken over by ex-education minister, Hamon. He promises to reduce the working week to 32 hours. However, talented speaker Jean-Luc Mélenchon has recently gained popularity in the polls, and whilst he is unlikely to make it to the second round, he could well be placed in the first.

And some election vocabulary to help you to follow the news.