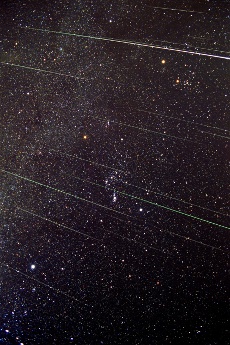 On  Saturday 8th October, our planet will cross a trail of meteors, a storm of tiny space rocks, causing  a spectacular meteor shower in the sky. An exceptional phenomenon not to be missed!

The showers come from the periodic comet  ’21P/Giacobini-Zinner’, which passes close to  the Earth every six and a half years.

The Draconids are normally a minor shower, with ten or less yellowish meteors per hour at peak,  fairly slow moving, hitting our atmosphere at only 12.5 miles per second. However, this  Draconid meteor shower is expected to produce unusually high peak meteor rates of 600 meteors per hour, with two maxima, one around 18h, and the other 22h30,  clearly visible to the naked eye, without a telescope.

This is unlikely to happen again for forty years, which makes it exceptional, but  events  like this  are difficult to forecast, so anything is possible – it could be fantastic  on the nights of October 7 and 8 –  or a total washout.

A very clear sky will be neccesary and the Mediterranean area should be clearer than  northern Europe, although the moon will be nearly full at that time of the month and could block the display.

Astronomers find the event  particularly exciting because these are the same trails that originally caused a meteor shower in 1900, when the comet was discovered.

It is also the opportunity to participate in science: everyone can contribute to the work of astronomers, whether amateur or not, by sending an observation report to the International Meteor Organization.