Spotted any new (or should that be old?) faces of late while strolling the streets of Céret? Before you say no, here are a few more details. These faces are acrylic, and they make their appearance on walls and the sides of buildings scattered round the town centre.

The artist behind the faces prefers to be known only as FAS.
“I am very proud of our artistic history,” explains FAS, who lives in Céret with his family.
“I decided to create these portraits in tribute to a handful of the many painters and other artists who either were locals or else were drawn to Céret’s charms as visitors. My portraits include both well-known and lesser-known painters.”

FAS has completed six so far, with three more in the pipeline.

His portrait project got started more than a year ago after he received a thumbs up from the Mairie. 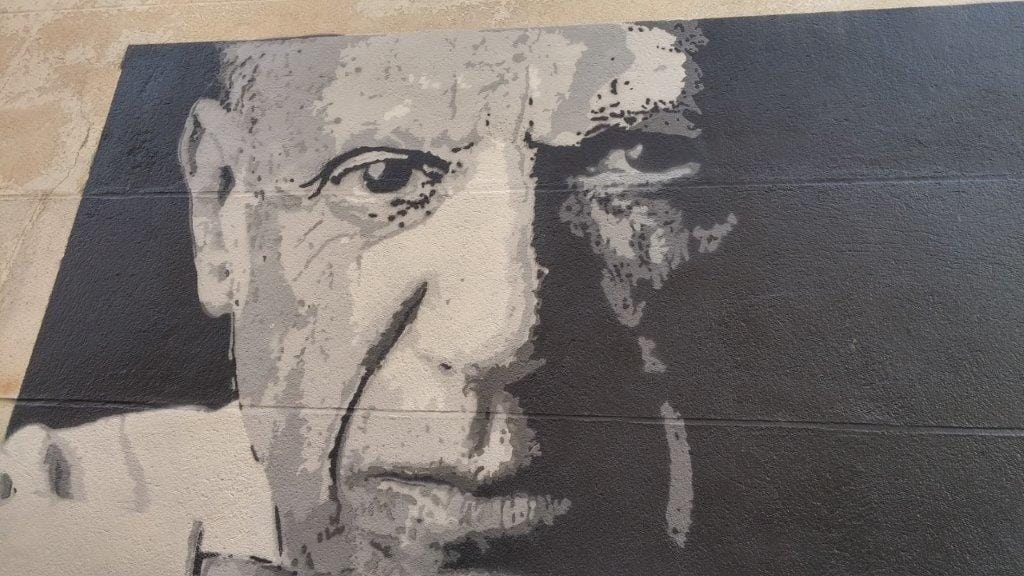 Perhaps as no surprise, the first face to appear was that of Pablo Picasso. It can be found tucked around the corner of a building down the street from the Tourist Office. Actually, the portrait is more than just a face. Picasso is depicted with paintbrush in hand, painting birds, some in the process of escaping off the edges of the work. 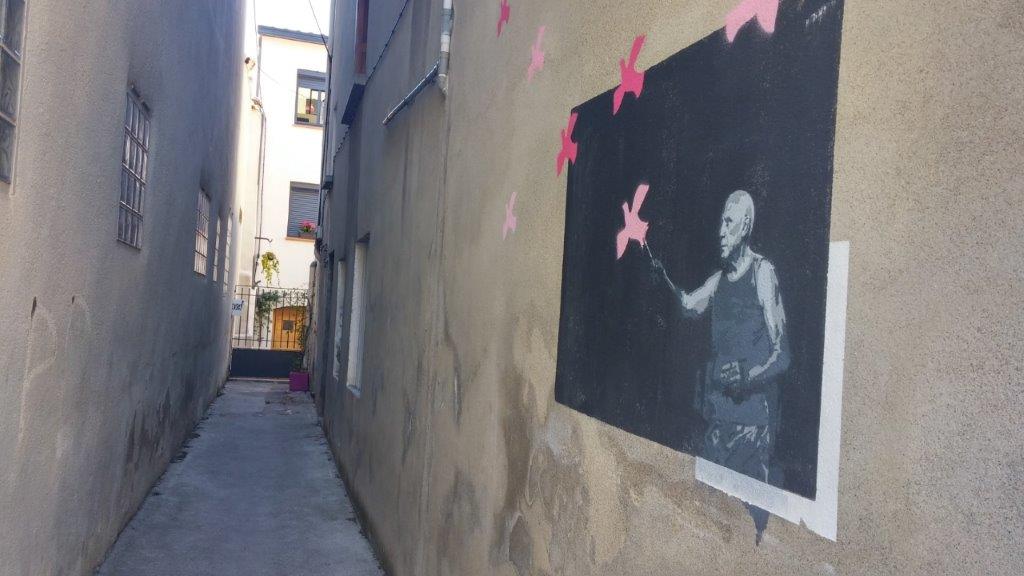 Other faces have since joined Picasso. A group of three grace a wall on a narrow cobblestone street leading down from Place des Neufs Jets. One of them is Chaim Soutine, smartly decked out in a suit and tie in sharp contrast to his actual uniform of the day while in Céret — shabby blue overalls stiff with paint.

Next to Soutine is Jean Capdeville, a Céretan who began to paint at 30, died at 93, and claimed that painting for him was like a blind person’s walking stick, a way to stay upright.

Rounding out the trio is Laurent Ribérat, a self-taught painter whose style was “rustique” and who lived and worked in St. Jean Pla de Corts. The little girl shown on tiptoe hanging up Ribérat’s portrait is FAS’s daughter. 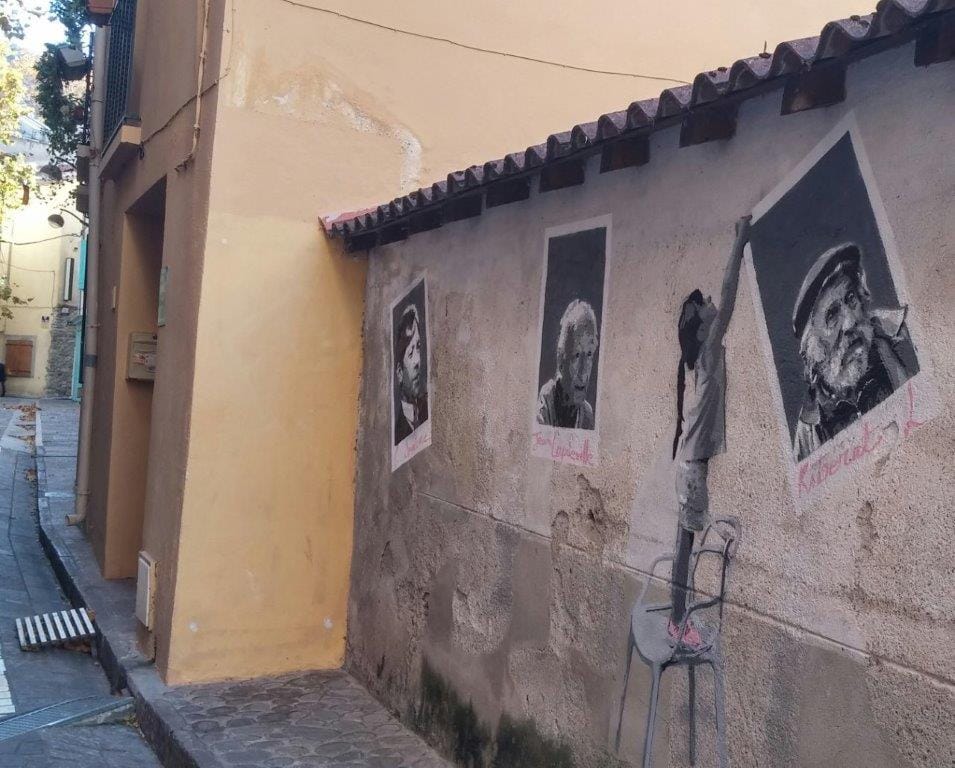 Two additional portraits complete the current group . One is distinctly visible from Place Picasso and features Felip Vilà, a flower in his hair. Born in Figueres and befriended by Salvador Dali, Vilà arrived in Céret in 1968, where the local penchant for bullfights became a source of inspiration. 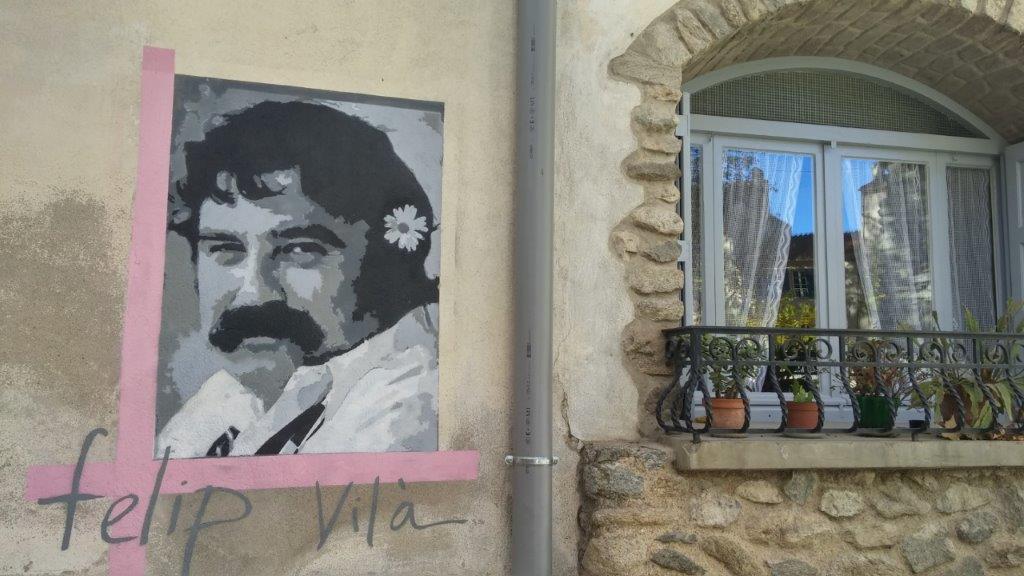 The other is a second portrait of Picasso, this time only his head, his piercing eyes dominating his facial features.

None of the portraits has been weather-proofed, a conscious decision on FAS’ part. He says he prefers that, like the cycle of life, they naturally fade over time as they interact with the elements. 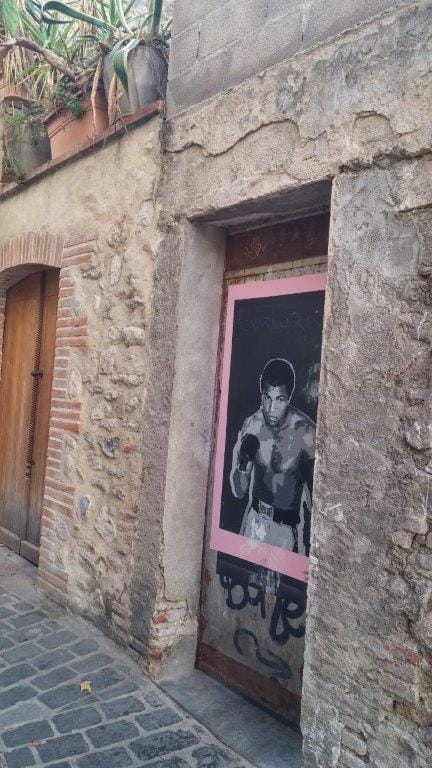 The additional three faces are likely to appear by spring. FAS’s choices? Pierre Brun, Joan Ponç, and Georges Braque. And oh, yes, if you happen to come upon an arresting portrait of Muhammed Ali, signed by FAS, it’s the same FAS. Not part of this project, obviously. But perhaps it could be claimed that Ali was an artist of sorts. Oui?