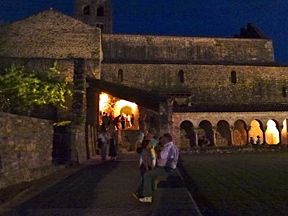 Thursday 26 July was the opening concert of this year’s Festival Pablo Casals, sixty years since Pablo Casals himself performed in the first festival. Then the Abbey church had no roof, was far from restored to the glory we now enjoy.

At a reception preceding the concert Christian Bourquin, P.-O. senator and president of our Region, shook hands with the abbot of St Michel de Cuxa and with Jean Castex, mayor of Prades, (with “mon frère et le Maire” he quipped to much laughter), and spoke of the importance of culture, tourism and life in “le Sud de France”, a marque that now applies not only to produce but to our patrimone… The EDF and the Region are major patrons of the restoration of the Abbey, along with money raised by the highly successful festival each year.

He praised the book on Pablo Casals written by Jean Jacques Bedu who was there to sign copies and, after a glass of particularly good local wine and a nibble, we filed into the peaceful Abbey Church for a stunningly beautiful concert. Christopher Coin with the Chamber Orchestra of Toulouse played music by Hayden, Bach, Purcell and Tchaikovsky to an appreciative audience, the evening was soft, the air sweet in the cloisters during the interval, the final applause thunderous and slow to fade.

The concerts continue until August 13th.