The barbecue is lit, the wine is poured, the mood is mellow… but uninvited guests may sometimes be waiting in the wings to spoil your day, even through the Deet and citronella mists.

TIGER MOSQUITO (MOUSTIQUE TIGRE)
These unpleasant little devils, identifiable by their black and white markings are different from the common mozzie in that they fly and attack during the day as well as night, and their stinger is able to pierce clothing! Keep yourself covered up or sprayed with repellent (available at all supermarkets and pharmacies). More scarce at the coast, where there is less vegetation and stagnant water to breed in.

HORSEFLY (TAON BRUANT)
Found mainly in wooded areas during hot, humid weather, anything warm blooded is dinner as far as these gals are concerned – the boys only suck nectar, not blood. They’re not that big; you don’t hear them coming and don’t feel them land. They flatten themselves on you, keep a tight grip, don’t fly away when you bat at them, and are surprisingly hard to squash after you’ve picked them off. Their bite itches like hell.

SOCIAL WASP (GUÊPE COMMUNE)
Anti-social might be a better name, as out of all the wasps, these are the real baddies, deserving of ASBOs. They will defend their nests (as bees will defend their hives) aggressively… and did you know that when a wasp or bee stings, a pheromone is released, attracting all the rest to wade in! (NB: There are other much bigger – and often scarier looking – wasps in the PO, but they are solitary, not aggressive and not interested in us or our food. So there’s no need to swat them!)

HORNET (FRELON)
It’s big – especially the queen of the European species, which can measure up to 35mm. They usually mind their own business and are far less bothersome than social wasps above. But if angered, they can sting any number of times. 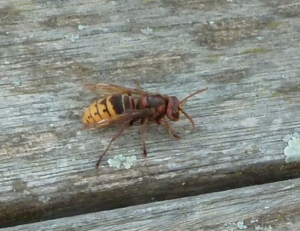 THE ASIAN HORNET (FRELON ASIATIQUE)
Orange face and legs, they are more interested in attacking bees than us, and can destroy a whole hive, but they will still sting in defence or if angered. 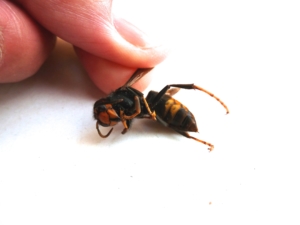 BEES (ABEILLES)
Many species are solitary and can sting but don’t. Honeybees are the most common and will sting in defence but usually mind their own business. If one investigates your brightly coloured T-shirt, it thinks you might be a flower, not a potential victim! Leave it alone and it will soon buzz off. Close up, honeybees can be striped, but not as brightly as wasps. 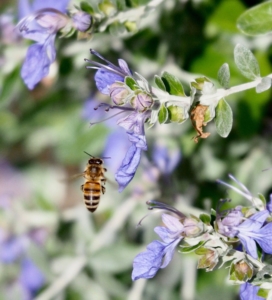 ADDER (VIPERE ASPIC)
This snake is distinctive by the triangular shape of its head, zigzag pattern on its back and vertical pupils (if you get close enough to look into its eyes!). Up to 50-60cm long, they like wooded and rough, stony ground. Their bite and venom are painful, causing skin to swell and turn blue around the site itself. If bruising appears elsewhere on the body within 6 – 8 hours, advice is to get to a hospital for an anti-venom injection.

YELLOW SCORPION (SCORPION LANGUEDOCIEN)
Uncommon, but if you are unlucky enough to get stung on the toe, your toe will swell up and – so we understand – turn blue! But don’t panic – you’re not going to die. (NB: The PO also has the BLACK SCORPION (SCORPION NOIR À QUEUE JAUNE) but its sting is not venomous. They lurk in dark, damp places in old buildings and if disturbed will try to scurry away.)

MEGARIAN BANDED CENTIPEDE (SCOLOPENDRE)
It’s big, fast and aggressive, grows up to 20cm long, and scuttles out from under leaf litter and flat stones at night. It will attack and consume almost any creature… smaller than itself. Phew. But stand on one in bare feet at your peril. Its defensive bite won’t kill you, but the pain will be severe for about 15 minutes. It’s another rarity though.

TICK (TIQUE)
April is the worst month for ticks, but they’re still around in the summer. The one below looks flat because it hasn’t fed yet. They love long grass – crawling up stems and waiting for a victim to brush past. But they also sometimes drop out of trees when they sense a warm body below. Although their bite isn’t usually painful or itchy, some ticks transmit dangerous diseases to humans and dogs. 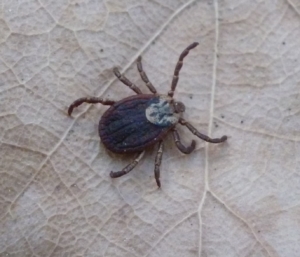 BLACK WIDOW SPIDER (L’ARAIGNEE VEUVE NOIRE)
This small spider lives in dark places in caves, under bushes and stones. Hairy, black, with little red spots, and highly venomous, but not deadly. Nevertheless, medical advice is to get to a doctor if you are bitten, because you will be in pain and feel ill for three or four days. It’s rare, however – a little more common in Corsica and Provence than in the P-O.

SEA URCHIN (L’OURSIN)
These invertebrate “sea hedgehogs” are impossible to mistake for anything else and are usually found in rocky areas. Some bigger species bury themselves deep in the sand, however. Those spines will break off into your sole if you step on one barefoot. The pain is said to be bearable (like having walked on splinters). Advice seems to consist of soaking your foot in water as hot as you can tolerate for 30-90 minutes. Spines can be removed with tweezers. Prevention is best. Wear sandals if you’re only paddling. And don’t try to pick one up with bare hands.

WEEVER FISH (LA VIVE)
Its English name makes it sound innocuous, while the French Vive reflects the level of pain inflicted by its poisonous dorsal spine: Intense. They like to partially bury themselves in sand, often
near beaches, leaving just their eyes and the tip of the first dorsal fin exposed. They’re not deliberately out to get you but don’t appreciate being stood upon and will punish you severely. The acute pain is said to last around 20 minutes. Although the venom itself isn’t considered lethal, there’s a danger the agony could cause drowning. Anti-inflammatory tablets should help and heat is said to reduce the agony of Vive venom. It’s best to soak your stung foot in water as hot as you can bear without scalding (with a little bleach added as disinfectant).

MOON JELLYFISH (LA MEDUSE)
Not all jellyfish sting, but this common species does have filaments under its bell that irritate skin, causing a burning sensation. Again, the main danger here is that a swimmer might panic and risk drowning. Although reputedly less painful than a Vive fish sting, it will be very unpleasant for at least ten minutes. Anyone with sensitive skin may suffer for several hours. For jellyfish stings the recommendation is to soak the affected area in alkaline water or vinegar.

All photos by “The Warblers”, unless otherwise stated