A tale of wasps and spiders

Just by walking around, we blunder constantly through the territory of many living things. Here are some of the more interesting – if less than cute – creatures whose paths I crossed last summer.

Some wasps, for example, don’t use flight as their main method of travel. One big, intimidating species prefers to run, as it specialises in hunting wolf spiders.

It goes only by the forgettable scientific name of Cryptocheilus alternatus.

Their MO is to first sting the spider in its own burrow, paralyzing but not killing it, before dragging it to the wasp burrow. They cover the ground scarily fast, even laden down by this giant of the arachnid world. 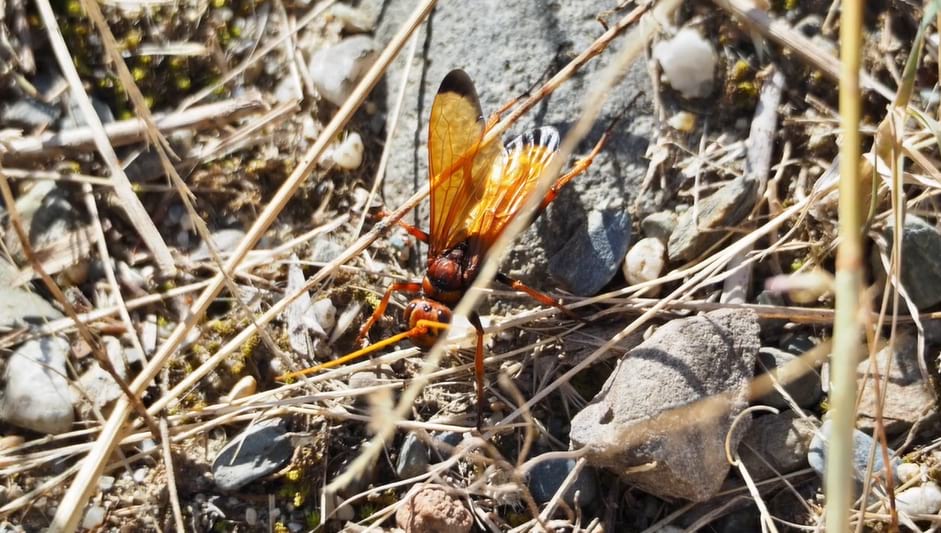 Near the River Tech, I spotted two wasps having a tug of war over a victim they must have paralysed earlier. The winner subsequently dragged its prize – backwards – for about 20m up a sandy bank, through scrub and down into the former fox den.

The spiders’ destiny was to have a single egg laid inside each of them and to be gradually eaten alive by the emerging wasp larva. That’s the food chain for you!

Watch what you chop with the secateurs!

Last summer a female tent-web spider (l’Épeire de l’Opuntia) set up her tent in our garden. Black with raised white studs on their backs (and harmless to humans), these spiders aren’t especially big, but their “tents” can be huge. They’re made with non-sticky silk, secured by long, strong “guy ropes” on vegetation, and do not need re-spinning each night.

Some prey that land or fall into them – as an acrobat falls into a net from a tightrope – manage to walk out again but the unlucky ones are seized and trussed up in seconds. True to her species, our female also dispatched her mate after he’d done his duty and dumped his corpse in a dustbin area beneath her tent. 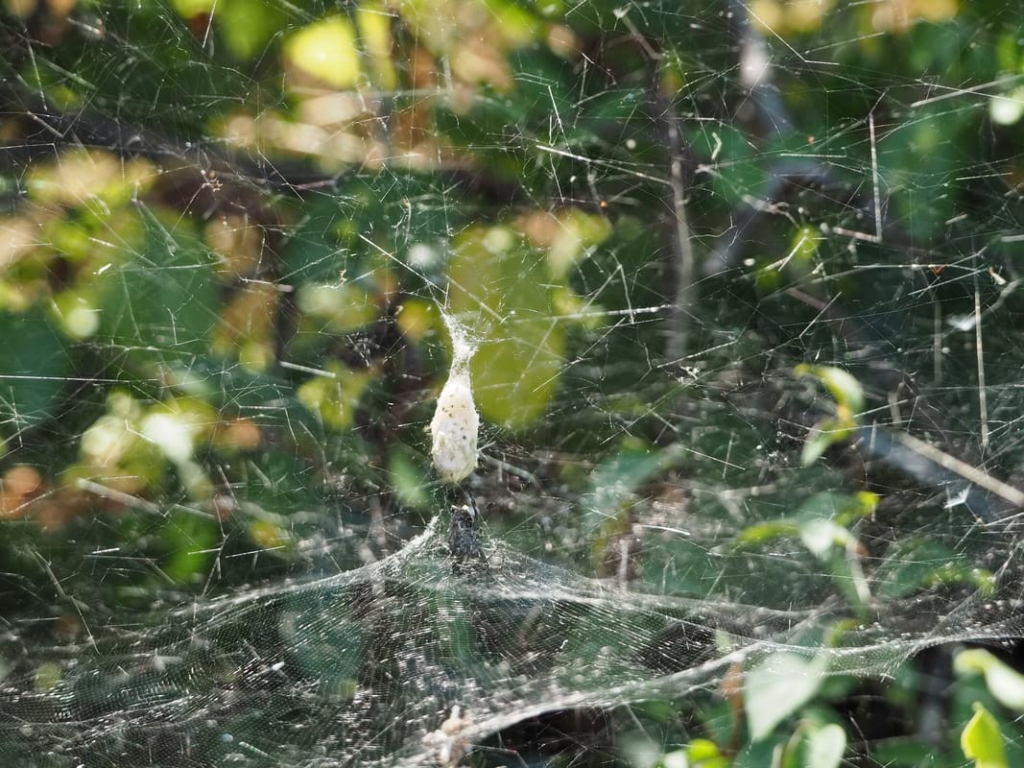 Every few days a new sac appeared beneath the others… until, by end September, a total of 9 hung, like a broad bean pod, in the centre of her tent. By then, spiderlings were emerging from the oldest sacs. 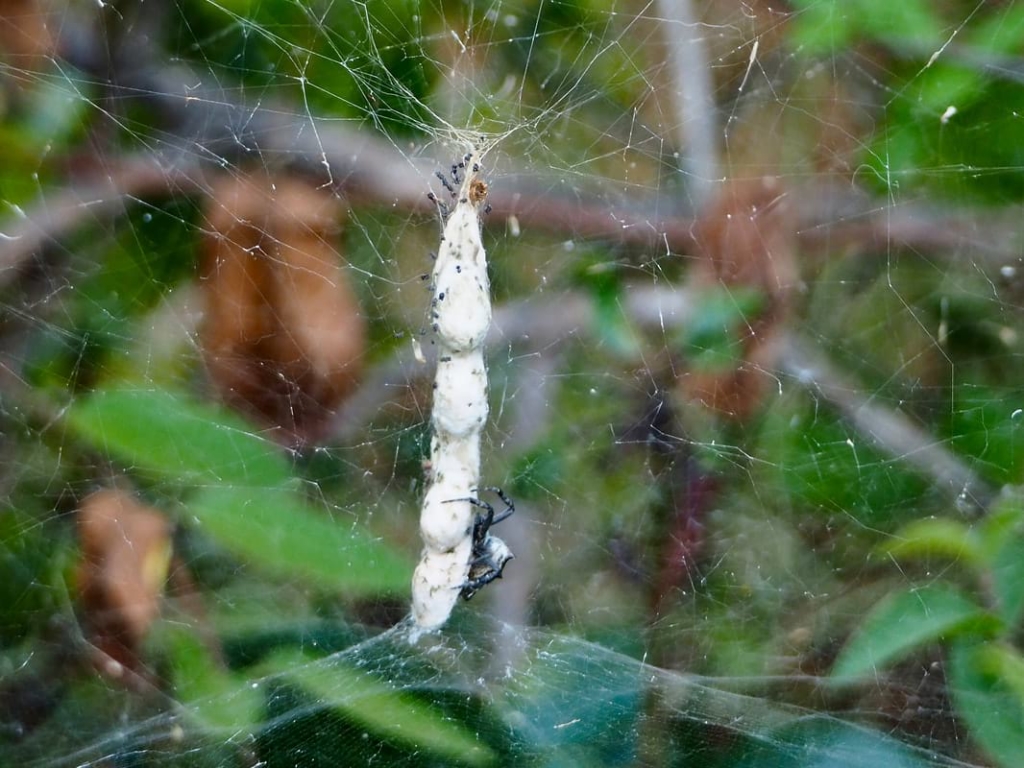 The spiderlings stayed close to home and, at only a few days old, began to spin their own mini tents within Mum’s – visible one dewy September morning. 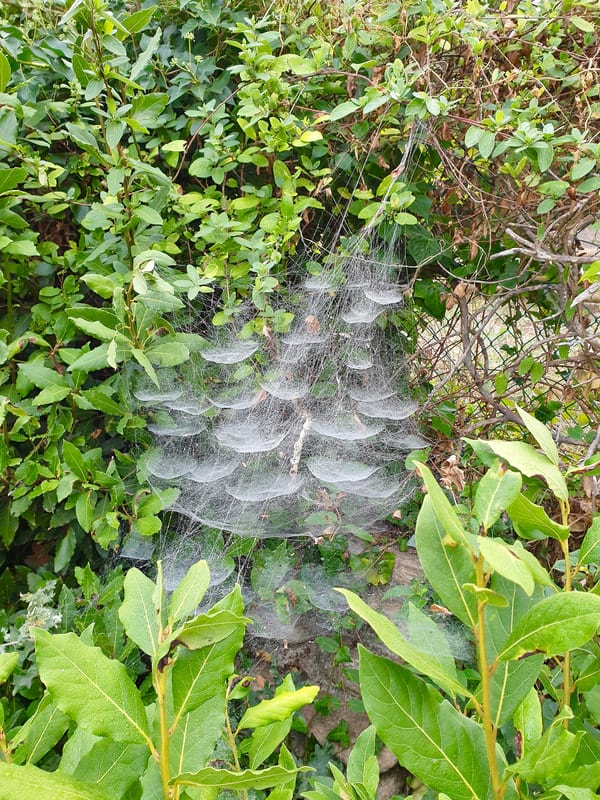 The matriarchal edifice slowly deteriorated from lack of maintenance and was finally destroyed by a series of gales.

All photos by “The Warblers”, unless otherwise stated (hover mouse over images)