Basil Howitt offers another snippet on the sex life of the Sun King, Louis XIV and, at the end of the local truffle season,  shares his modest acquaintance with truffled dishes and truffle lore. 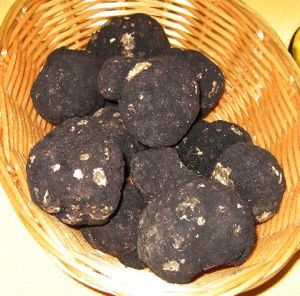 Ever chivalrous, I’ll get the sex bit over with first before coming to the tuber melanosporum.

You can, incidentally, find my first snippet on the Sun King here.

The marriage, of course, sealed the Treaty of the Pyrénées of 1659, which included the transfer of our Catalan province of Roussillon from Spain to France.

By his mid teens, Louis XIV (king since age 13) was already a ladykiller with his “beautifully long, curling hair” and his “blood of the gods”.

He was undoubtedly what teenage girls today would describe as “fit”, with a figure described as “tall, free, ample and robust”.

He fell in love with various Italian girls, relations of his first minister Cardinal Mazarin.

But nothing much happened that we can be certain of – except possibly with Olympe Mancini who later showed herself to be “frankly carnal”, “bold” and even “amoral”.

The king’s sexual initiation at age 15 was reportedly taken care of by his mother’s first lady-in-waiting and confidante, Catherine Bellier, Baronne de Beauvais.

She was 24 years his senior, and known unromantically as “one-eyed Kate”.

Nevertheless according to one source she was a passionate lady with numerous lovers.

In Antonia Fraser’s words, the incident was said to have taken place as Louis was on the way back from the baths – “she ravished him or at least surprised him” – and to have been enjoyable enough to be repeated on several more occasions.

The king thereafter seems to have retained a special regard for La Baronne during the rest of her life. She died at age 76.

A tailpiece to this story is that the queen mother herself (Anne of Austria) devised this seduction stratagem to ensure that her son was “propre au marriage” (fit for marriage).

In return for her exacting services, La Baronne was rewarded with a pension of 2,000 livres and a château. Nice work if you can get it!

From sex to truffles

The sumptuous dishes served in the court of the Sun King were often redolent with truffles.

They had been consumed in France since the reign of François I.

Louis developed an unbelievably gargantuan appetite as he aged and became gout ridden.

He was seen to work his way at dinner through five or six different soups, four or five entrées, four hors d’oeuvres, six roasts, and desserts of fruits, compotes and jams.

For all its extravagance, such a royal diet doesn’t make me green with envy.

I much prefer the copious rustic fare that my friends and I regularly enjoy, en famille, at an auberge in St Paul-de-Fenouillet, Chez la Mère Michèle.

I have been organising visits of groups of friends to dine there – anything up to 20 – for the last 6 years. The majority beg to be reinvited; only a few prefer their food to be served from a stainless steel kitchen in minute quantities, with dribbles of balsamic sauce bordering square designer plates!

Well, to be fair, the auberge is rather basic, though all the more loveable for that. It’s like eating in a time warp.

After visiting the antediluvian though spotless loo (with its old-fashioned makeshift pull chain) in the ground-floor cave, you mount some ancient, steep wooden stairs.

Then you pass through the distinctly non-mod-cons kitchen and enter the dining room with a long communal table lined with a motley collection of jumble sale chairs, none too sturdy for the likes of me.

A huge grandmother clock ticks away, a woodburning fire smokes away, and the huge stag’s head of a beast killed by Claude presides over us.

It was Michèle and her partner Claude who introduced us to this heavenly way of savouring truffles.

In mid-winter, the first hors d’oeuvre might be truffled butter on slices of home baked bread to go with a choice of sweet fortified apéritifs: muscat, ambré (brownish yellow) or Rivesaltes (red).

The oohs and aahs go on and on as the subtle, musky, heady scent and taste of the truffles seduce our palates.

Another time I’ll tell you about the rest of the meal (see below), but for now, it’s time for Claude to take over.

He has explained how he finds and digs up wild truffles in his native commune of Fenouillet, remote in Le Fenouillèdes. (Most truffles on sale these days, incidentally, are cultivated.)

One lunchtime we asked Claude to explain how he found the truffles. Did he use a dog? Or even a pig? With a little smile he replied “I find them myself.”

Having now caught everybody’s rapt attention he continued. “Where truffles grow, a special type of fly hovers. It’s got triangular shaped wings like this” – here he makes a shape with his big rough hands – “so when you see them, you have to approach very carefully and then dig in the leaf mould.

Not quickly!! – or you will scare the flies away, and then you wont see where the truffles are!”

And now to spoil the magic! These flies lay their larvae on the truffles which then soon rot.

The truffles actually grow as tubers on the smallest secondary roots of certain native oaks.

The ideal terrain for truffles is splintered calcareous rocks on chalky soil. For the foraging in the soil, two-pronged forks and ancient hooked gouging tools are used.

Claude never sells his truffles – even though they could now fetch up to 1,200€ a kilo at the local truffle markets.

The nearest two are at Latour de France (early January) and Lesquerde, (mid February, and only a few kilometres from St Paul). Others in the P.-O. are held in Villefranche and Arles-sur-Têch.

The recorded quantities sold are around 30 kilos in these four towns. Needless to say, on the black market a further 200 kilos are shifted.

How can it be otherwise when it takes between 12 and 17 years for a planted truffle tree to produce the goods, and even then the yield rate is from about one only in 10 trees?

No wonder the transactions are mostly carried out with fistfuls of used 50s, 100s and even 200s.

My only other experience of truffles has been in Latour de France. For several years the then mayor, Michel Sol, himself prepared with his team of volunteers a truffled meal as part of the village’s annual truffle festival in early January.

The meal was simple but divine, and, given the village hall context, in no way marred by the plastic crockery and cutlery. Included were two pièces de résistance: a thick, substantial, piping hot slab of truffled omelette accompanied by a truffled potato salad with finely chopped spring onions, an exquisite vinaigrette dressing and thin slivers of gésiers or ducks’ giblets.