Report and photos by kind permission of Fred Whitmarsh 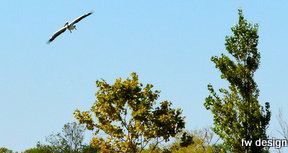 Visitors to the ‘Parc de la Prade’, St.Cyprien on 24th September were astounded by the dramatic arrival on one of the lakes, of a huge Dalmation Pelican (see photograph).This threatened species is known to ornithologists as the world’s heaviest flying bird. 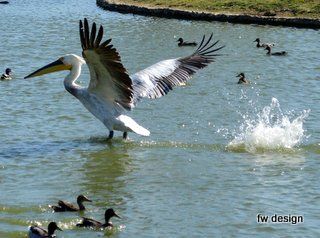 ducks and swans, who gave ‘the big one’ a wide berth.  Except for one bold swan who tried to out face the stranger but was soon repelled by the threat of the pelican’s enormous 285cm (9.1/2 feet) wingspan.  Equally surprised were the park keepers who had never seen this species in the area before – and were not a little worried about the lake’s protected carp, as these fish are a primary food source of the Dalmation Pelican.

All in all, everyone there was privileged to witness a magnificent, if incongruous sight. 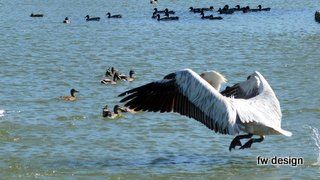 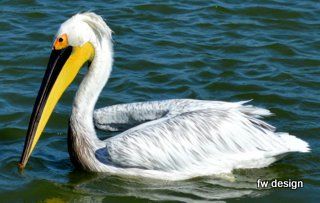 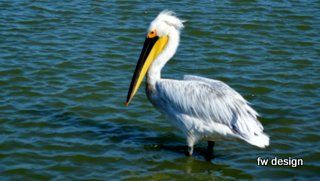 More about the Dalmatian Pelican from Wikipedia

The Dalmatian Pelican(Pelecanus crispus) is a massive member of the pelican family. It breeds from southeastern Europe to India and China in swamps and shallow lakes. The nest is a crude heap of vegetation.

Its mean weight of around 11.5 kg (25 lb) makes it the world’s heaviest flying bird species, although the largest individuals among male bustards and swans may be heavier than the largest individual Dalmatian Pelican. It also appears to have one of the largest wingspans of any living bird, rivaling those of the great albatrosses.

When the Dalmatian Pelican is in flight, unlike other pelicans, its wings are solid grayish-white with black tips. It is an elegant soaring bird. When a whole flock of Dalmatian Pelicans is in flight, all its members move in graceful synchrony, their necks held back like a heron’s. It is the largest living creature that can fly.

The Dalmatian Pelican is often silent, as most pelicans are, although it can be fairly vocal during the mating season, when it may engage in a wide range of guttural, deep vocalisations, including barks, hisses and grunts.