It’s a balmy evening. The barbecue is lit, wine poured. Glass in one hand, fly swat in the other, you’re coated in Deet, surrounded by citronella candles; eyes peeled and ears pricked for attackers. The garden’s bad enough, but what about tomorrrow’s walk in the country? How to tell friend from foe, underfoot and in the air?

“The Warblers” are back, to help sort the good from the bad and the ugly

1. Yellow Scorpion (Scorpion languedocien) Happily, these are uncommon. In over 10 years the Warblers have yet to see one. Have you?

If you are unlucky enough to get stung on the toe while walking in sandals on dry, stony ground, your toe will swell up and – so we understand – turn blue! But don’t panic – you’re not going to die.

It’s big, it’s fast, it’s aggressive. Sometimes growing up to 20cm long, this monster scuttles out from under leaf litter and flat stones at night, and will attack and consume almost any creature … not bigger than itself. Phew. But stand on a scolopendre in bare feet at your peril. Its defensive bite won’t kill you but the pain will be severe for about 15 minutes. It’s another rarity though.

3. Tick (Tique) April is the worst month for ticks, but they’re still around in the summer. The one below looks flat because it hasn’t fed yet. They love long grass, so it’s best to avoid rolling around in meadows. Although their bite isn’t usually painful or itchy, some ticks transmit dangerous diseases to humans and dogs.

They crawl up stems and wait for a victim to brush past. Or drop out of trees when they sense a warm body below. 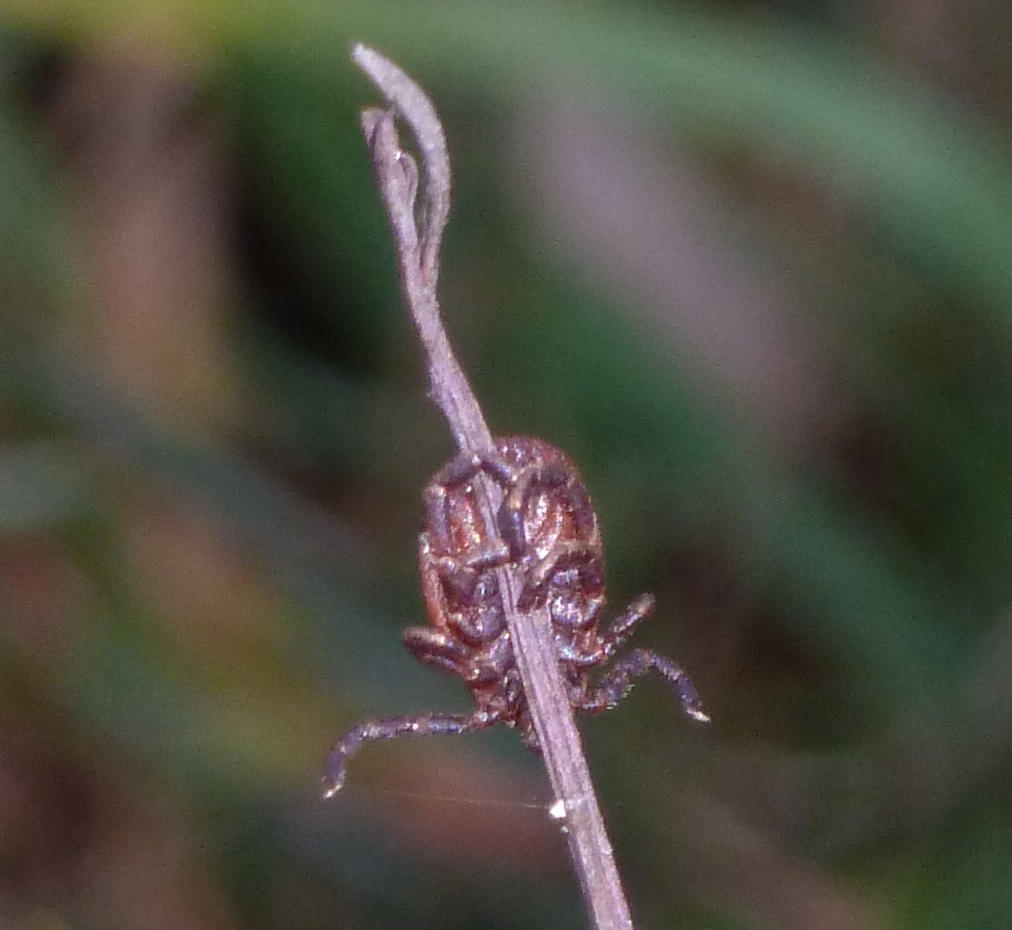 4. Social Wasp (Guêpe commune) Anti-social might be a better name, in terms of their relationship with humans! There’s wasps and there’s WASPS, and it’s only this species that’s the real baddie – prone to making unprovoked attacks; landing on your burger just as you’re about to take a bite; circling your wine; chasing you round the geraniums. They deserve ASBOs. All social wasps, hornets and honeybees will defend their nests and hives aggressively, so kids (big or small) are advised not to poke them with a sharp stick to see what happens. Because when a wasp or bee stings, a pheromone is released, attracting all the rest to wade in!

Ever wondered why social wasps seem to be more of a nuisance in late summer? It’s because earlier on, when they feed their larvae with protein, they get a droplet of liquid sugar in return. But by late August/September there are few, if any, larvae left to feed, so that’s why the adults switch to bbq sauce and Chardonnay for their sugar hit!

5. Hornet (Frelon) It’s big – especially the queen of the European species, which can measure up to 35mm. They usually mind their own business, even when falling-down-drunk on our grapes. But if angered, like wasps, they can sting any number of times.

The Asian hornet (Frelon asiatique) has an orange face and legs. Here’s one that expired after overdosing on our grapes! 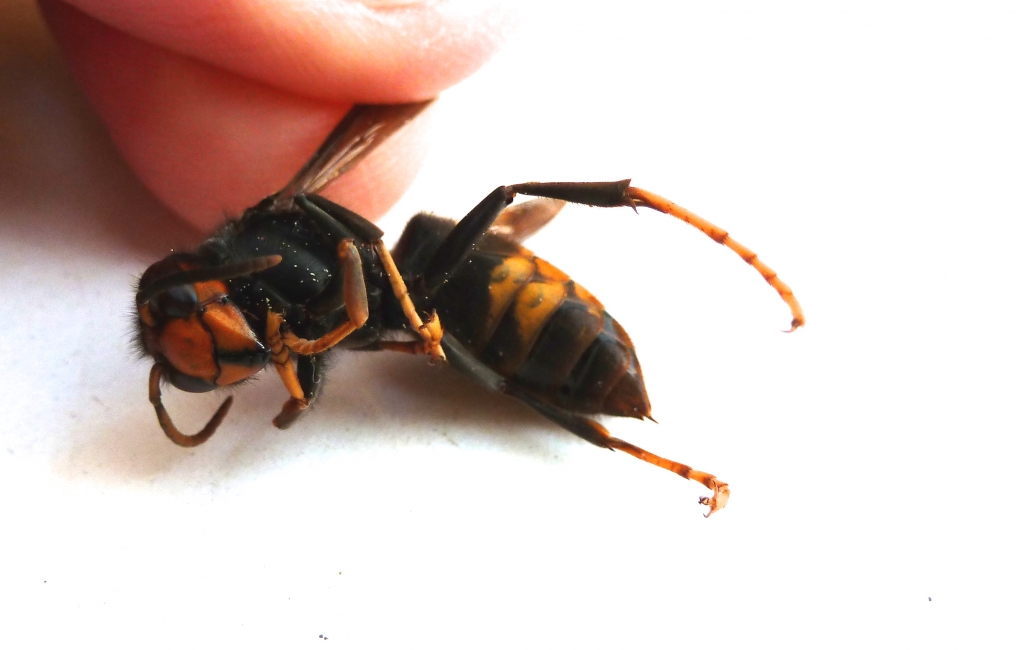 These are more interested in attacking bees than us, and can destroy a whole hive. Their own nests are, however, architecturally rather beautiful. The one below was recently spotted near the very top of a cork oak. 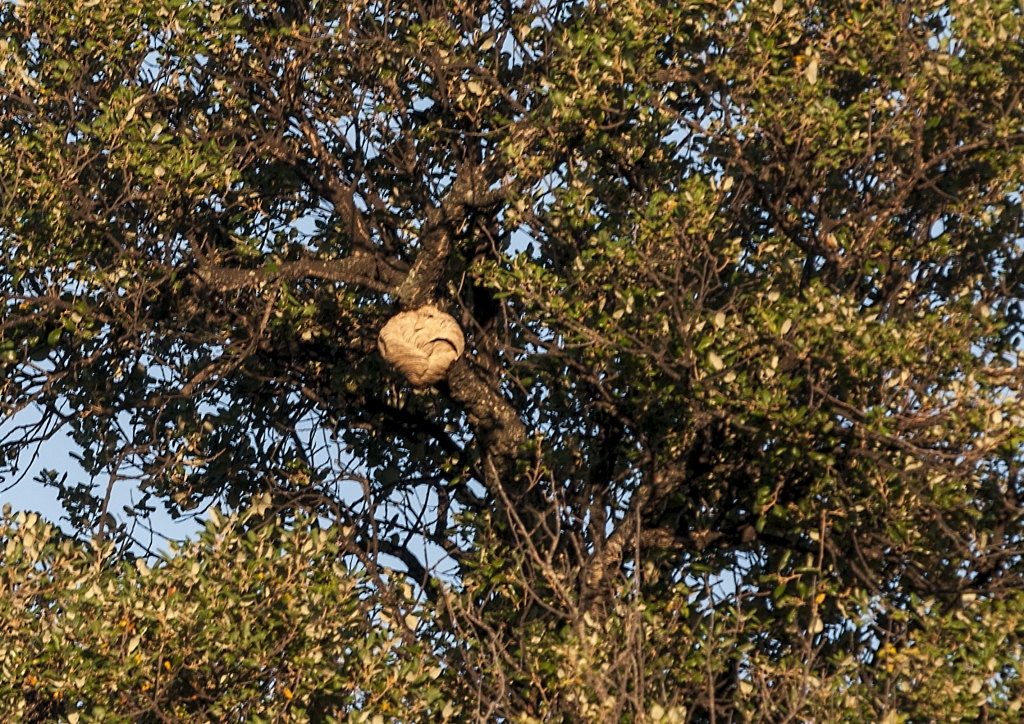 6. Horsefly (Taon bruant) In wooded areas during hot, humid weather, these can be a real pain in the bum (but more usually on exposed flesh). Anything warm blooded is dinner as far as they’re concerned – the girls that is. Males have more refined tastes and suck nectar, not blood. They’re not that big; you don’t hear them coming and don’t feel them land. They flatten themselves on you,  keep a tight grip, don’t fly away when you bat at them, and are surprisingly hard to squash after you’ve picked them off. Their bite itches like hell.

7. Tiger mosquito (Moustique tigre) After last year, who isn’t intimately familiar with these daytime bloodsuckers? Some of us still bear the scars. Their black and white markings make them deceptively attractive but there’s a risk they could transmit serious diseases. And, once again, it’s only the females that bite. They’re back.

SOME BEASTIES CAN STING BUT DON’T LOOK FOR TROUBLE

Black scorpion (Scorpion noir à queue jaune) Lucky P-O, we get two scorpions for the price of one. These lurk in dark, damp places in old buildings. They’ll try to scurry out of your way. But if you do find one on that Burgundy you’ve just picked up in the cellar, its sting is not venomous.

Long legged centipede (Scutigère véloce) With a body length of no more than 35mm, it’s small but scarily formed. 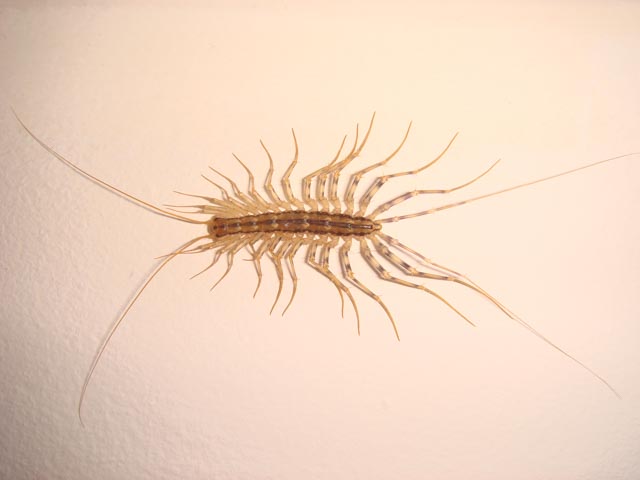 All centipedes have a venomous bite or sting, so, as this one is also known as the house centipede, it’s a relief to learn that it’s classed as harmless to humans.

These kill and eat spiders and insects (from wasps to bed bugs!), so should be welcomed, not killed or ejected. Their MO for attacking prey is to jump on it or “lasso” it with their legs and sting with their feet! A mind-boggling spectacle to look out for in your living room.

Also in this category are some other wasps:

If they’re not the social baddies, they’re the solitary goodies. Some are huge and look as if they’re armour-plated (think Robowasp), but they aren’t out to get you, and can be fascinating to observe, such as:

The Ruby-tail. There are many different types of these metallic-coloured wasps. Their sting isn’t usually functional and there’s no venom in most species. The Scolia flavifrons (Scolie des jardins) below, is the biggest Ruby-tail, with the female up to a whopping 40mm long, but is harmless to humans. 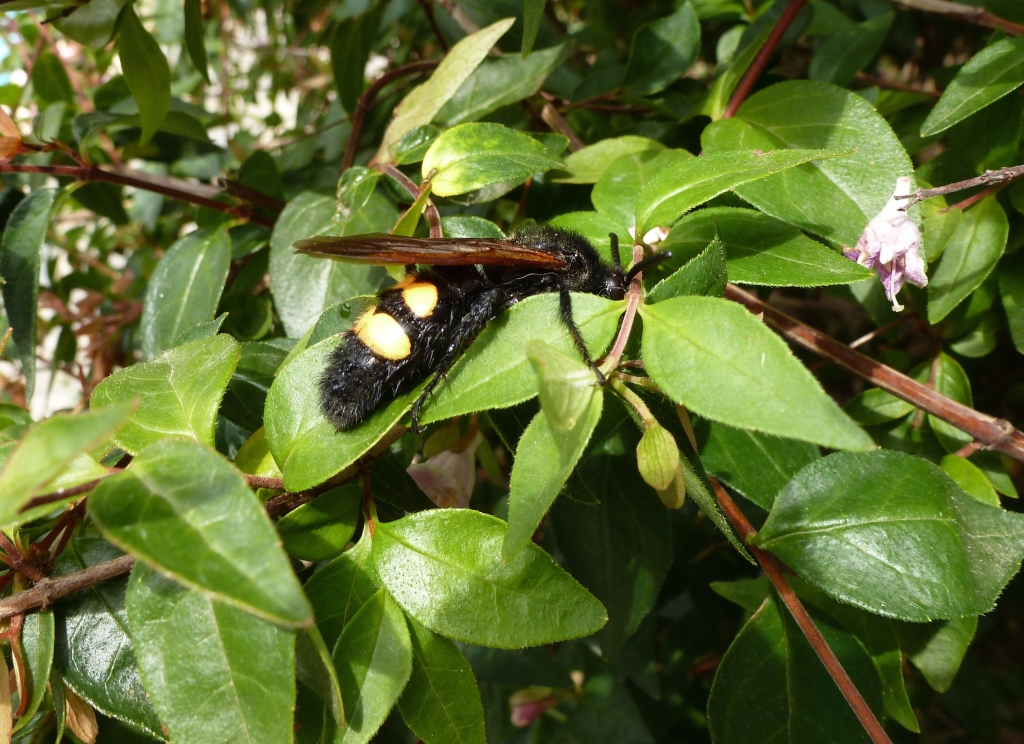 The Mason Wasp (Guêpe maçonne) As the name suggests, it builds mud nests. But these are only breeding chambers for two of three larvae, not social housing for thousands, so there’s no need to destroy them. 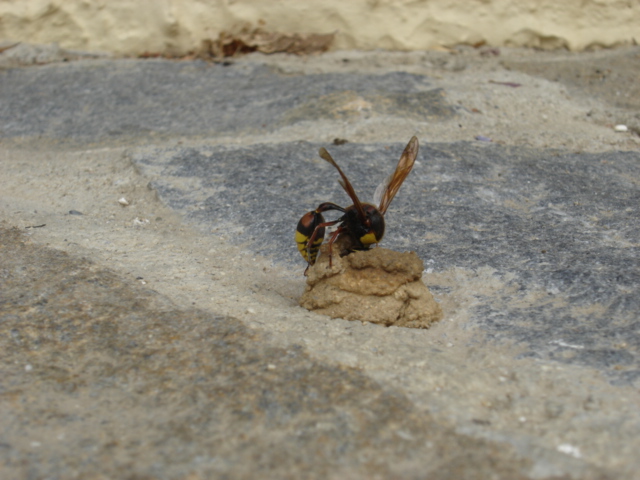 After laying an egg in each chamber the female adds a spider or caterpillar she has killed, on which the larvae will feed. After sealing the nest she flies off, never to return. Nor will her young, once “fledged”. Below, you can see where two fully-grown wasps have emerged after dislodging the plugs from their nest. 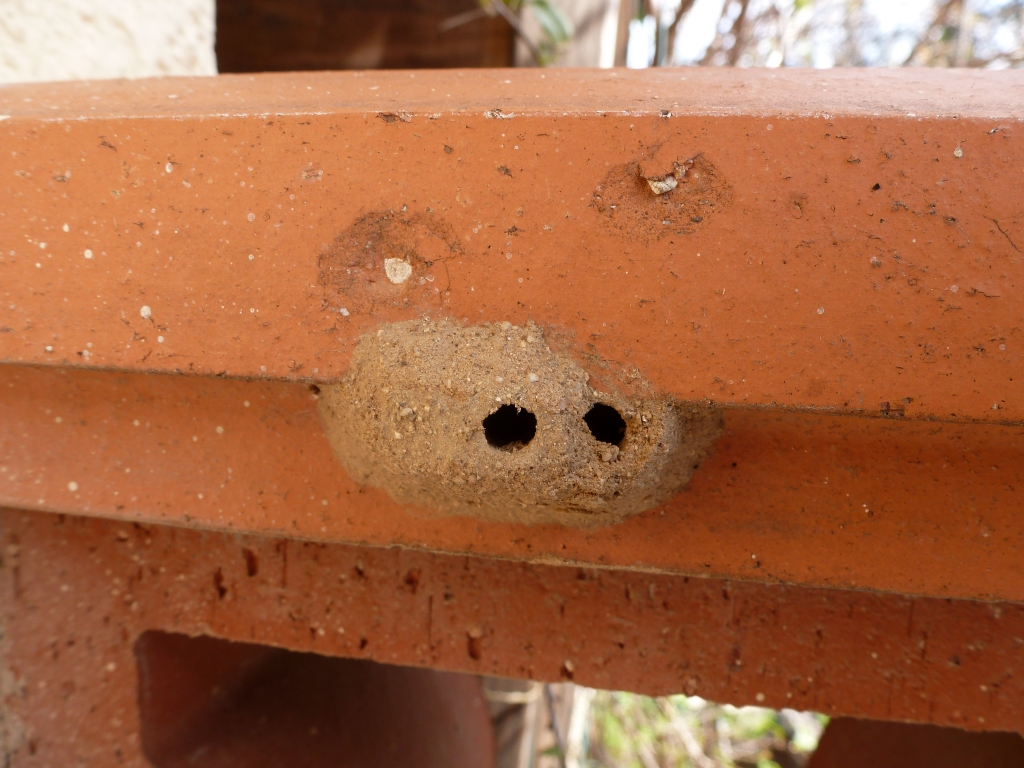 Digger Wasp (Guêpe creuse-terre) digs holes in your grass. Like the mason, it lays an egg inside, adds a dead spider and plugs the hole with sand. It’s not aggressive but, if trodden on by a bare foot… 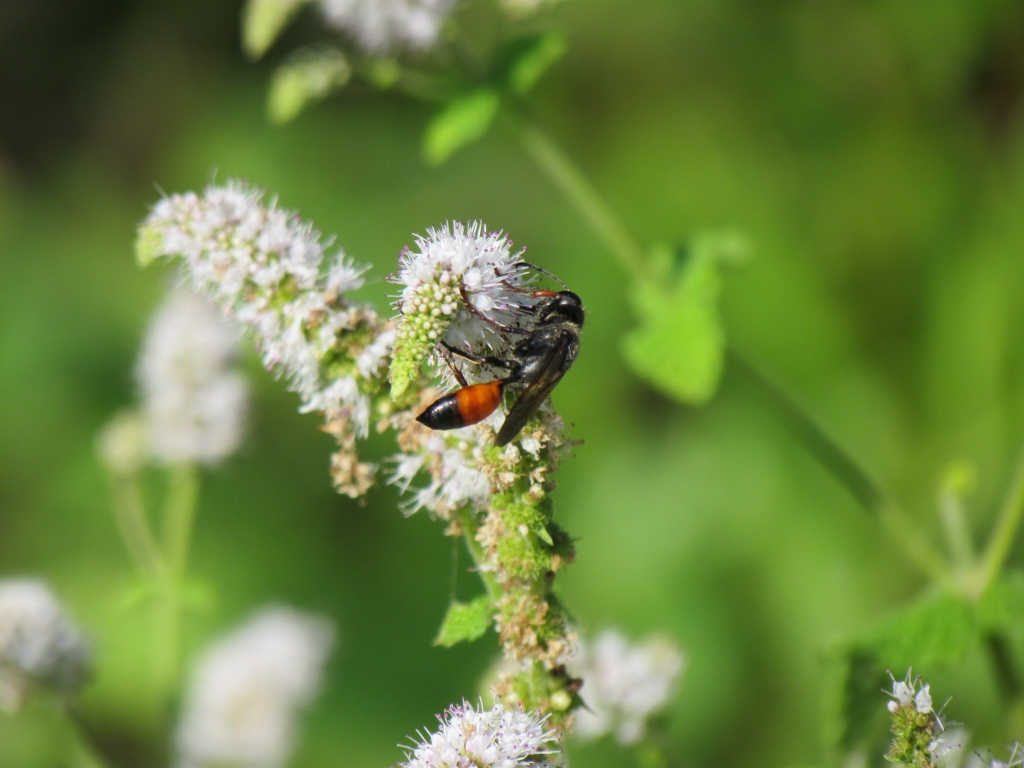 Honeybee (Abeille à miel) can only sting once. This is because its stinger is barbed and as the bee flies off, the entire stinging apparatus is ripped from its abdomen – which means it dies. It therefore only strikes as a last resort, in self defence.

When under attack by something like Asian hornets, some bees sacrifice themselves to protect the hive – they are the suicide stingers of the insect world.

Bumblebee (Bourdon) Almost cuddly-looking with their fat, furry bodies, these solitary bees are perhaps the least likely of any to sting, and they’re also endangered. So why not create a bumblebee haven in your garden?

Other solitary bees, like the enormous, blue-black Carpenter (Abeille charpentière) are capable of stinging more than once, but are much more prone to flight than fight. No need to swat! 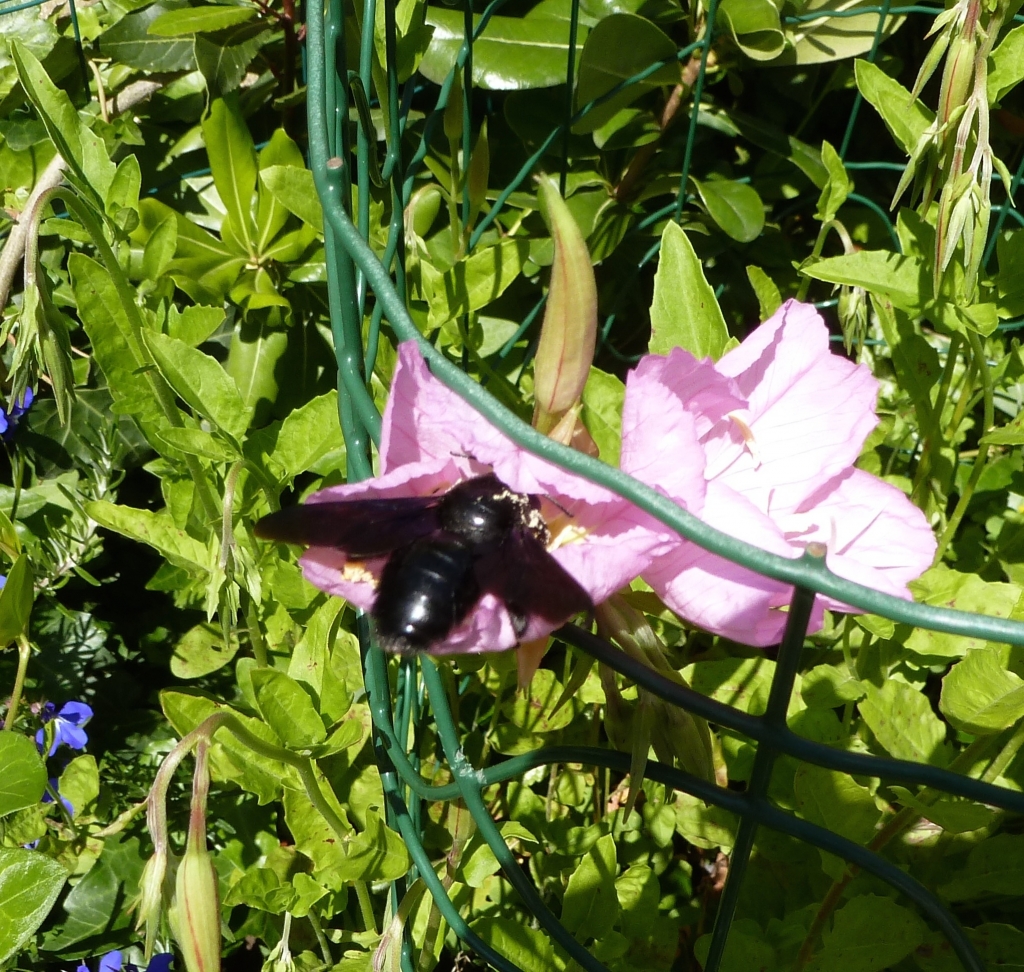 Such as the Praying Mantid (Mante religieuse). Females are only evil towards their mates – plus ça change? 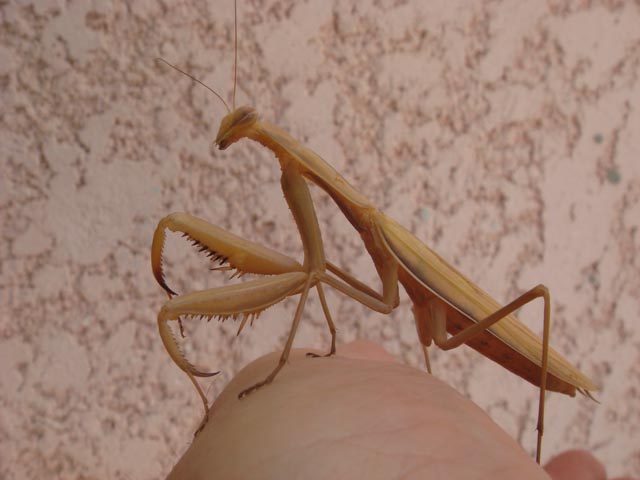 Scorpion Fly (Mouche-scorpion) Despite a wingspan of only 12-15mm, the male’s scorpion-like rear end looks scary – to everyone but his mate. But you can rest assured that even the females of this species will only feed on you if you’re dead. Apparently you can tell a body is fairly fresh by the presence of scorpion flies. Good to know, if you’re a pathologist. 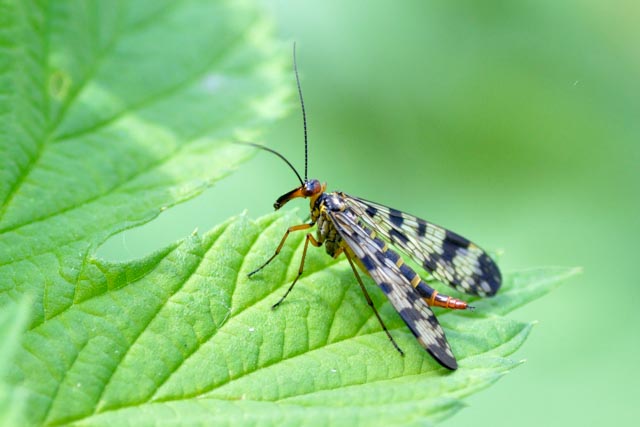 And what about this ugly brute? The Giant Tachinid fly (Echinomyie grosse) 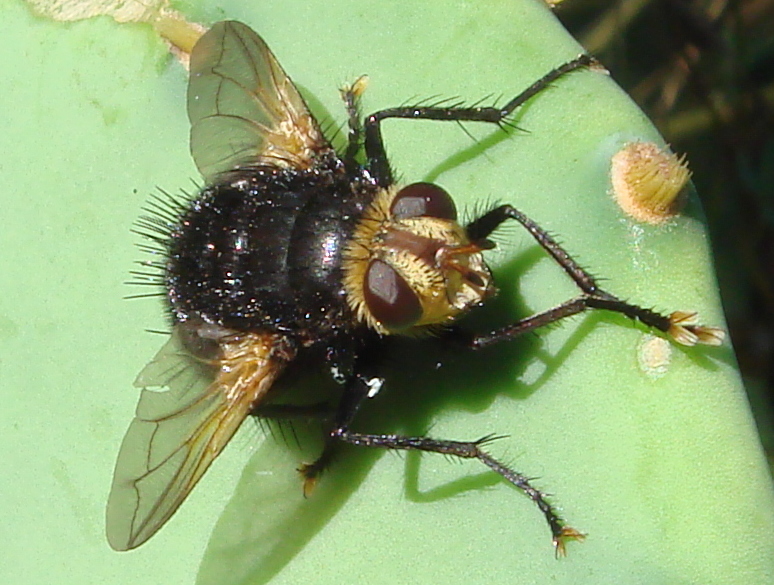 Well named in French (and Latin: Tachina grossa) – this one certainly does look gross close up. According to Wiki: “The female lays her eggs on other living insect larva, the fly larvae then develop inside the living host, devouring it and eventually killing it.” Nice. But it won’t bug you. When feeding, it’s only interested in your steak tartare.

Mole Cricket (Taupe grillon). Rarely seen in daytime, this peculiar cricket, with lobster-like front claws and vicious looking spikes at the back, burrows rather than flies. And is harmless to all except vine roots. 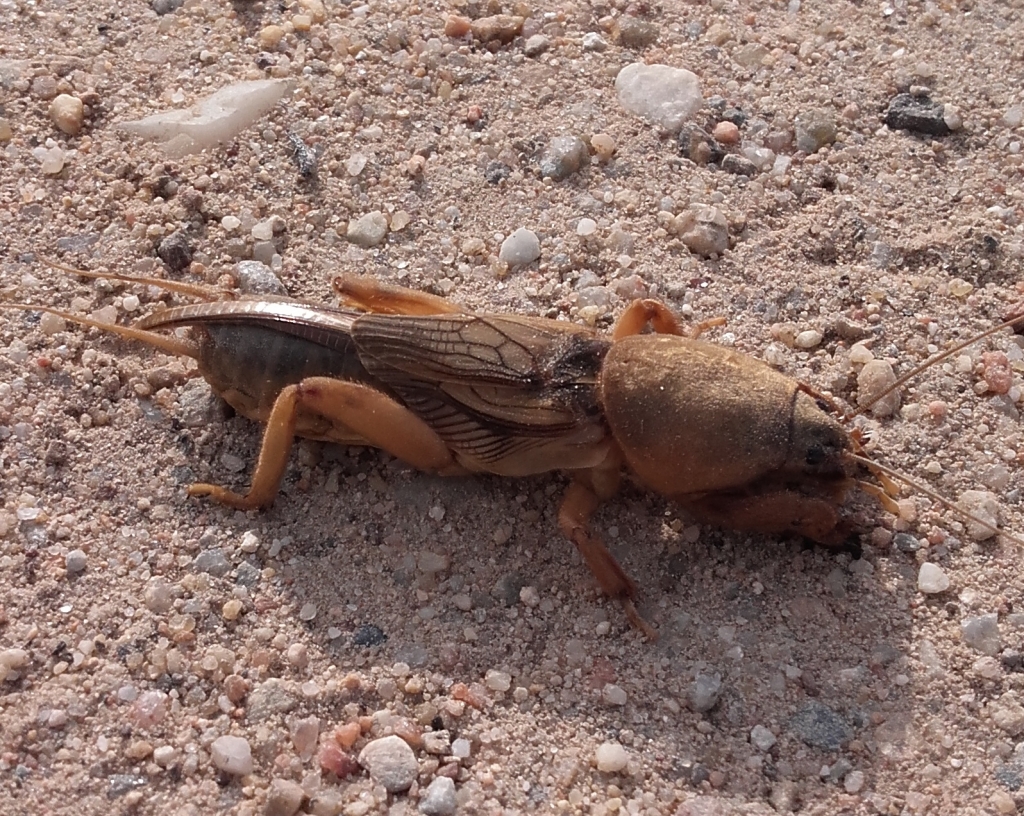 The yellow and black or orange and black combo warns predators: “DANGER!” But sometimes it’s a bluff. Some beetles do this, such as the Orange Blister beetle (Mylabre inconstant) 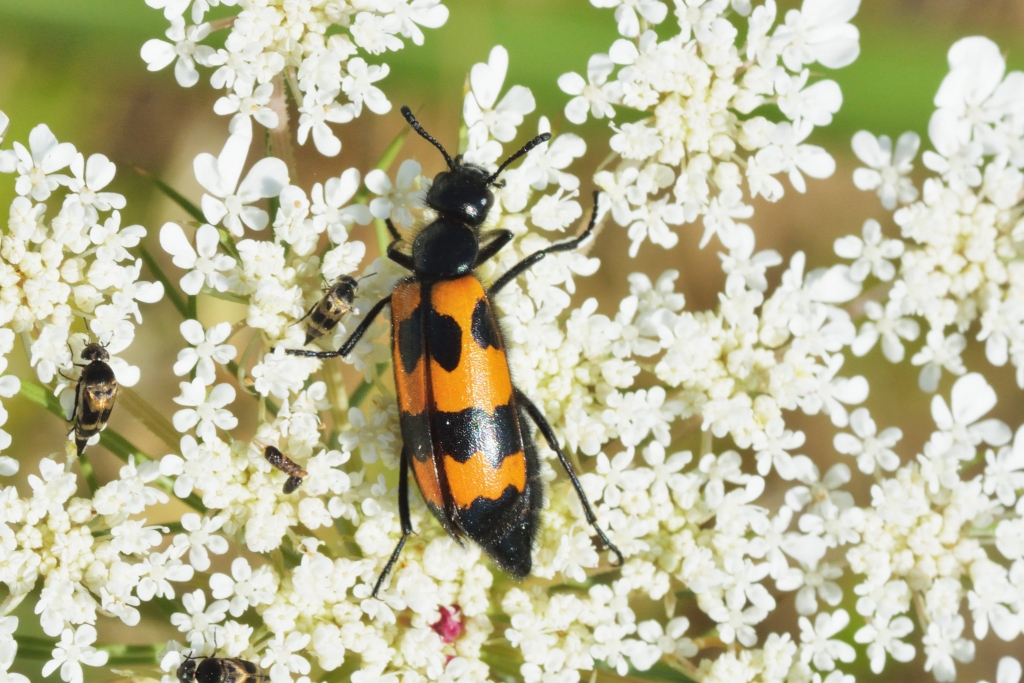 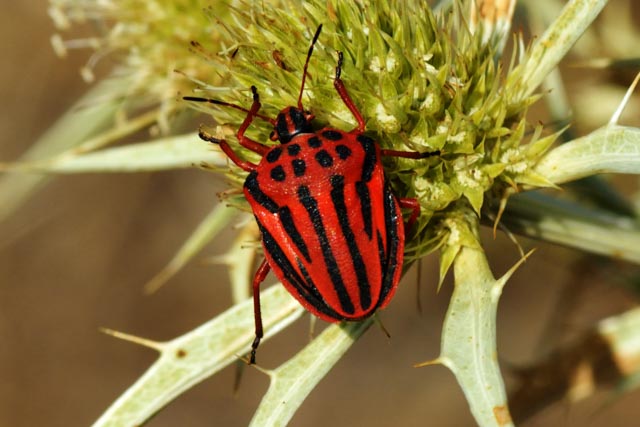 Hoverflies are even better at bluffing because of their close resemblance to wasps. The Hornet Mimic hoverfly (Volucelle zonée) is a massive, but friendly, 2cm long. 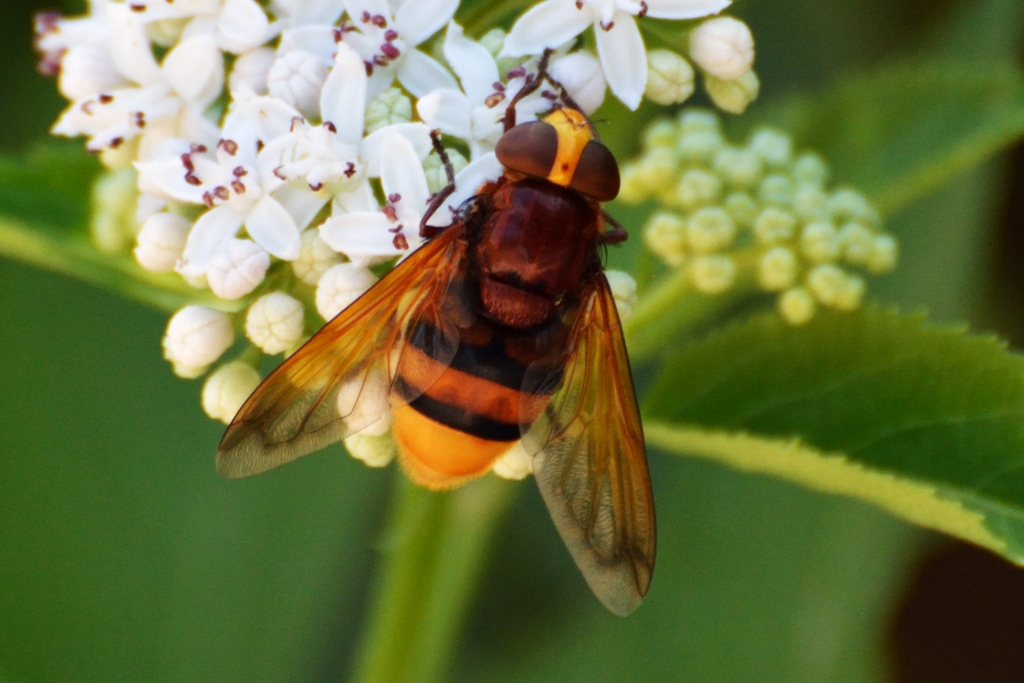 It’s worth remembering that if a wasp- or bee-like insect hovers when it comes to take a look at you, it’s a hoverfly, incapable of stinging or biting. Note too, that their eyes are huge compared with wasps.

MEANWHILE, OTHER INSECTS THAT LOOK BEAUTIFUL AND HARMLESS

ARE BEAUTIFUL AND HARMLESS

Such as dragonflies and damselflies. Some of these are black and yellow too. Like this Small Pincertail dragonfly (Onychogomphe à pinces) 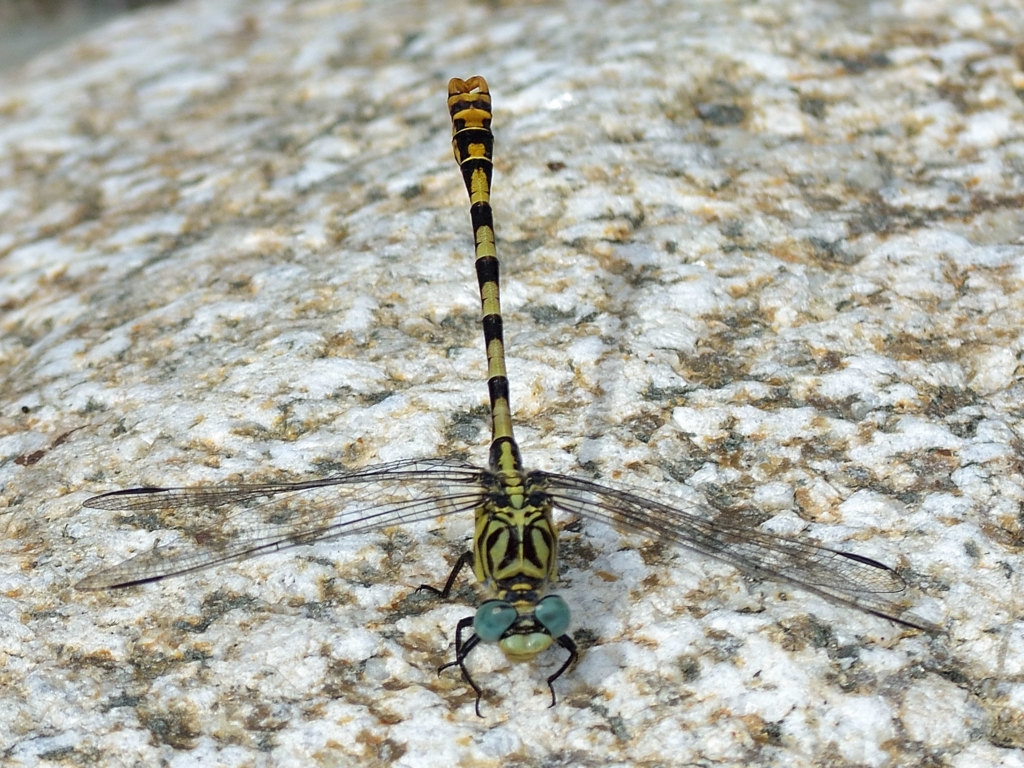 But there are countless species of each, in myriad colours. How can anyone fail to be uplifted by the sight of dragons and damsels darting back and forth like flying jewels over our lakes, rivers and streams in summertime? Here’s a Western Demoiselle (Caloptérix occitan): 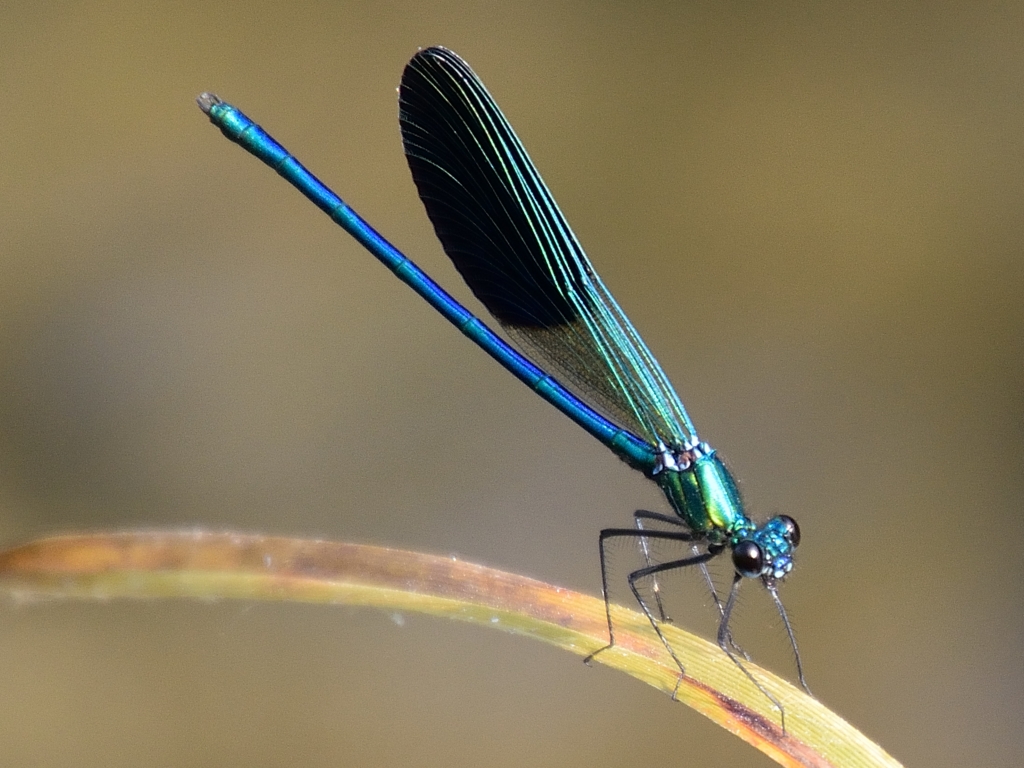 While some bugs and creepy crawlies might look gross enough to give us nightmares, few deserve to be feared or exterminated; many more deserve our admiration, for the role they play in nature, or simply for their beauty.

… some people react more strongly than others to any venom – and children may be especially sensitive – so if you’re ever in doubt, seek medical advice.

“The Warblers” are a group of natural history enthusiasts based in the P-O. For more blogs and photos, or if you’d like to contact them, visit www.mediterraneanpyrenees.com