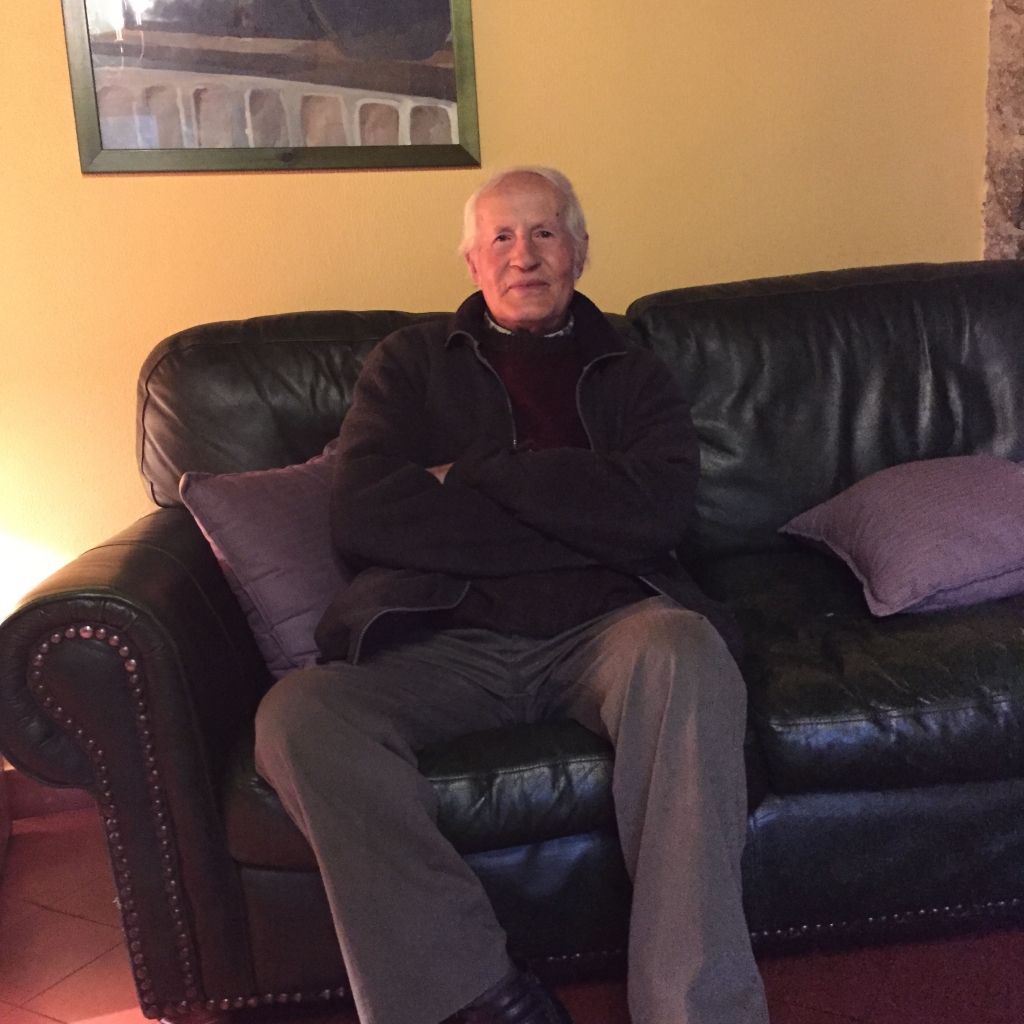 This is the second instalment of the history of our farmhouse home in the hills above Ceret.

I was very lucky to meet Jaume Bertran. My french teacher also works as a carer. When she arrived to give me my french lesson recently she remarked that she had a new client and that he had told her that he knew Mas Pallagourdi very well. When she pressed him for more details he told her that he had lived at our house as a child. It was this, in fact, that spurred me on to discover more about the history of our house, and I asked her to set up a meeting.

Thus a few weeks ago, Jaume and his daughter arrived. He was visibly excited to be here, starting to talk about his memories from the minute he stepped out of his daughter’s car. This is the story he told.

Jaume was born in 1917 in a small village over the border in Spain, called Agullana. When you drive these days from the frontier towards Figueres you may notice the sign for this quiet village off the main road, near to La Jonquera. Jaume was the fifth of seven children, all of whom had been named after saints in the Sagrada Familia. His was a poor, farming family and malnutrition led to illness and developmental problems. In fact, he was so ill his family expected him to die, and as a young boy he had problems walking. He remembers the whole family being picked up by a horse and cart to be taken to the vineyards just south of Perpignan for the grape harvest. The family jumped down from the cart and made their way to the picking areas, forgetting he was not able to easily follow. He had to peer over the tops of the vines to try and make out where they had all gone.

In June 1939 Jaume’s family packed up their few possessions and joined the long procession of people fleeing Franco. They crossed the border near to Las Illas and made their way into France, hoping for work and shelter. The family stopped at a farm further up the mountainside than us, where they were allowed to live and work but things soon began to go wrong. Locals denounced the family. Jaume was taken to a refugee camp, separated from his parents, and put with adult men. This was hard for a ten-year-old boy who had to keep his wits about him to stop men stealing his small ration of food. After a year, however, he was reunited with his family at Mas Pallagourdi.

At that time, our house and land was part of a much larger domain, owned by Edmond Puig and his very rich wife (who apparently had inherited a lot of land as her brothers had been killed in WW1). At the time, Edmond Puig was a general in the French Liberation Army. Jaume’s family took over the tenancy of Mas Pallagourdi in about 1940. Jaume recollects they were hungry most of the time, even though they grew corn, kept chickens, cultivated vines and figs, and collected what they could from the forest. He was able to tell me something I was most interested in, the layout and use of the house at that time.

Where we now sit to watch the tv was the family’s kitchen. We knew this as there is an ancient bread oven set into the fireplace. They slept above in what are still bedrooms. Part of the lounge, however, was the stable for the one horse that the family owned. The middle part of the building was the wine store. When we purchased Mas Pallagourdi there was a huge oak wine vat in a corner of this room. Previously there had been six. The room above, which we use as a yoga studio, was the grain store. At the other end of the building was a byre for three or four cows. These were used to pull the plough and to cart goods home after a shopping expedition to Ceret. When I asked if the family took any goods to sell at the market he laughed. No, he said, we hardly had enough for ourselves. He recollects the first time he ploughed the field, the very wavy line that he had produced and his father, with his head in his hands in despair. In autumn, when the forest was full of chestnuts, these were gathered up and taken to Perpignan, where they were swapped for espadrilles.

There were many young people living on the hillside at that time, but the only road was a dirt track, now known as the Balcon de Ceret. Other, quicker routes through the forest provided the means for the young people to get to the weekly dance held in Ceret on a Sunday. Big jobs on the farm were occasions for everyone to get together. Killing the pig, for example. They all gathered and helped to kill, skin and butcher the animal, then afterwards someone would fetch a flagon of wine while someone else wound up the gramaphone and they would dance the night away.

But of course, there was a war on, and the occupying army kept tight control of the refugees, often calling at Mas Pallagourdi to check on the family. On one occasion a German jeep screeched to a halt outside the house and a half dozen officers jumped out. “Where are the firearms?” they demanded. Someone had denounced them to the authorities for the illegal keeping of weapons. When the family protested their innocence, the house was ransacked, the family lined up against the wall and told that if they did not confess they would be shot. Fortunately, one officer still hunting around the house found the old gun they used to kill the animals, and they were spared.

By 1943 Jaume was 16, itching to escape from France and to make his way to England. Although the border was patrolled he managed to get to Girona, where a Spanish family took him in. He stayed here some time, until he was called up by Franco’s army. Jaume again went on the run, catching a train towards France and jumping off at Figueres. From Figueres he started to walk across the Pyrenees towards home, hiding by night and walking by day.

At the end of the war, General Puig told the family he wanted the house and land back, as he wanted to renovate it and then live in it himself. The Bertran family found another mas nearby, which, very kindly, the General purchased for them, and Jaume’s parents lived out their lives here.

Jaume Bertrand was a pleasure to talk to, his eyes bright and sparkling with fun. It was an honour to meet with him.

Click here for The History of Mas Pallagourdi, Part 1