If you’re wondering why the P-O is graced with fewer palms than a decade ago or why many remaining trees look sick or dead, pests in the form of a moth and weevil are to blame.

Accidentally imported in palms from South America, they’re big and easy to spot when flying – from early May to end November.

Originating in Asia, both the beetle and larvae eat palm leaves and burrow into their stalk bases.

The moths and adult weevils are attracted from a distance by the smell of sap from cut fronds or wounds on trunks and, because neither pest has natural predators in this part of the world, they lay waste to our palms (but only those plants) with gay abandon.

All varieties are susceptible. Once infested, they quickly sicken.

One summer yours looks healthy … 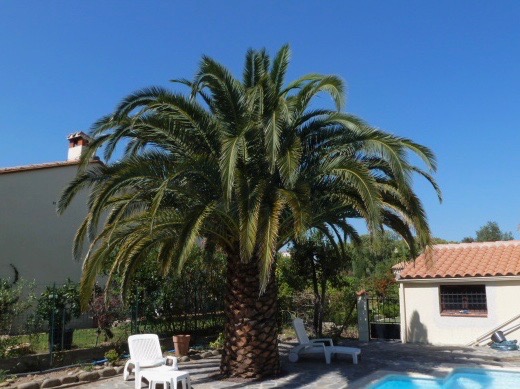 Next spring, the lower fronds are weak, creating a two-tiered effect. 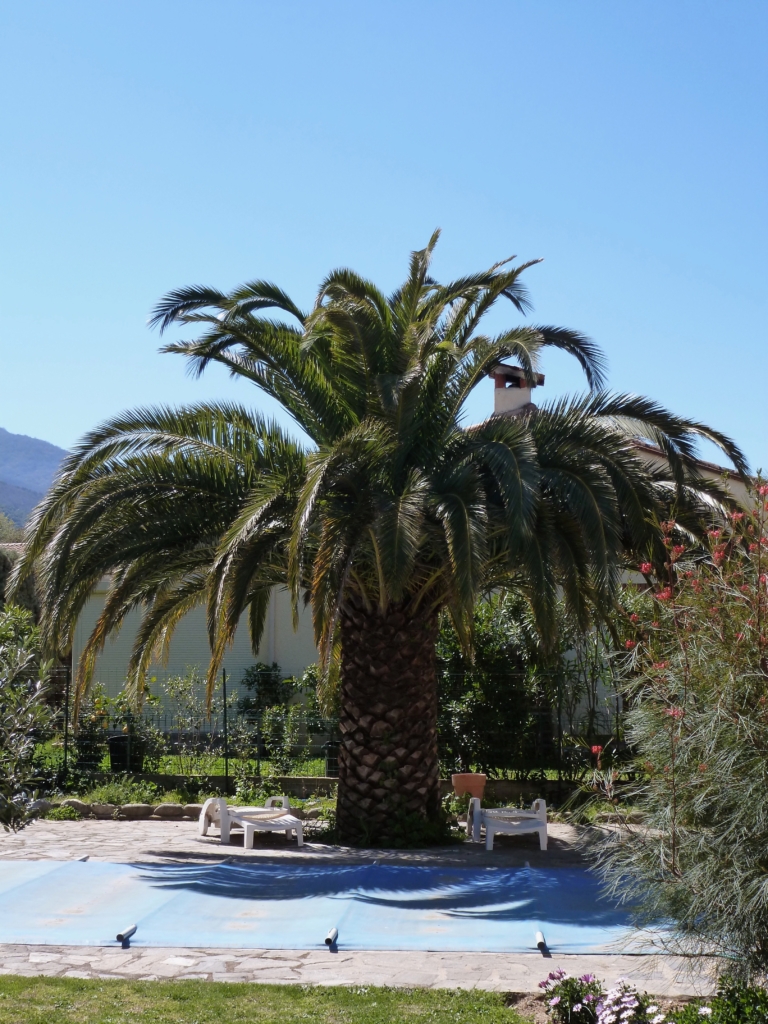 Only a month later, it’s lopsided. The end is nigh. 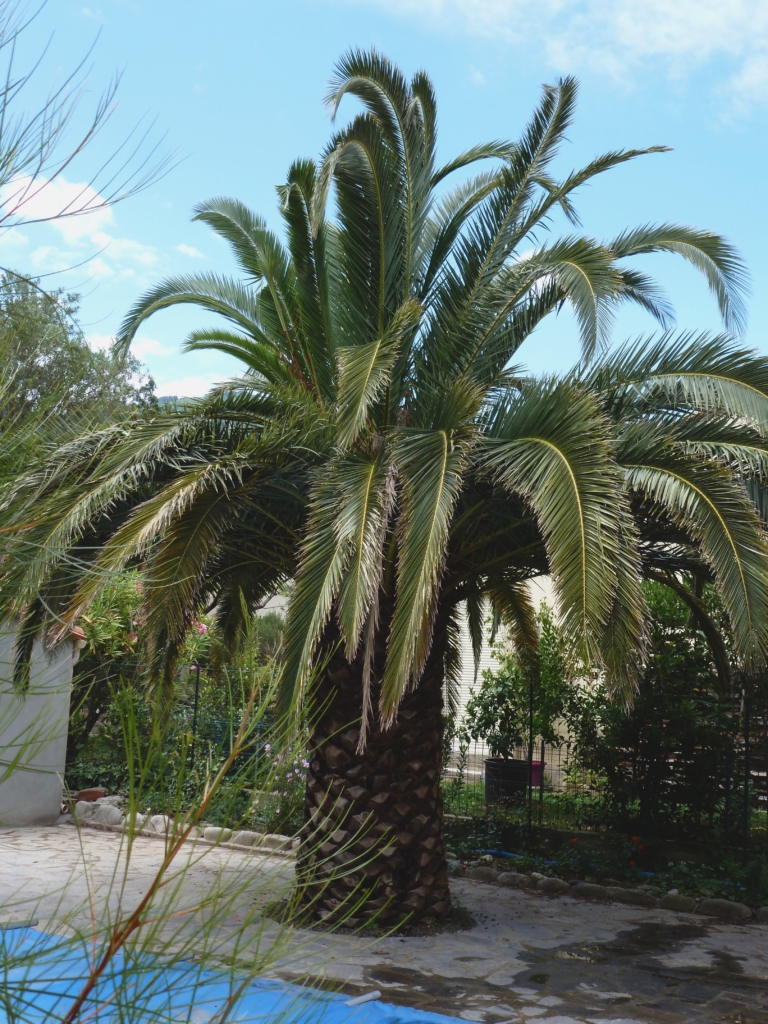 In other cases, all fronds rapidly turn grey and die. 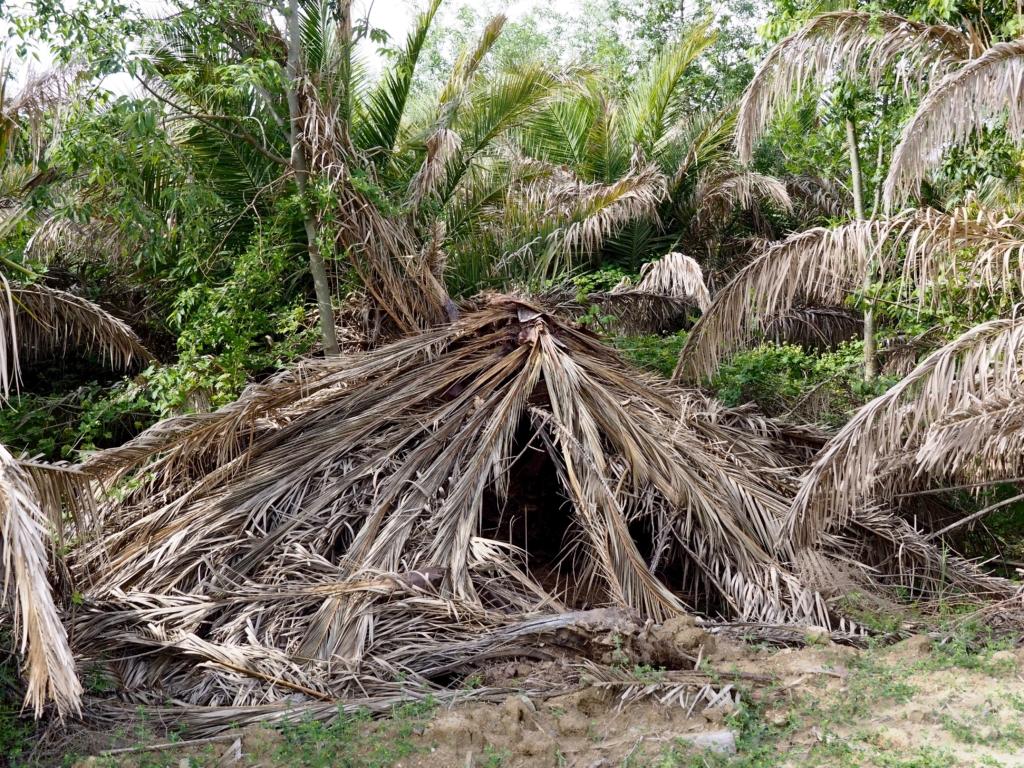 And some simply topple over because the trunk has been fatally weakened. 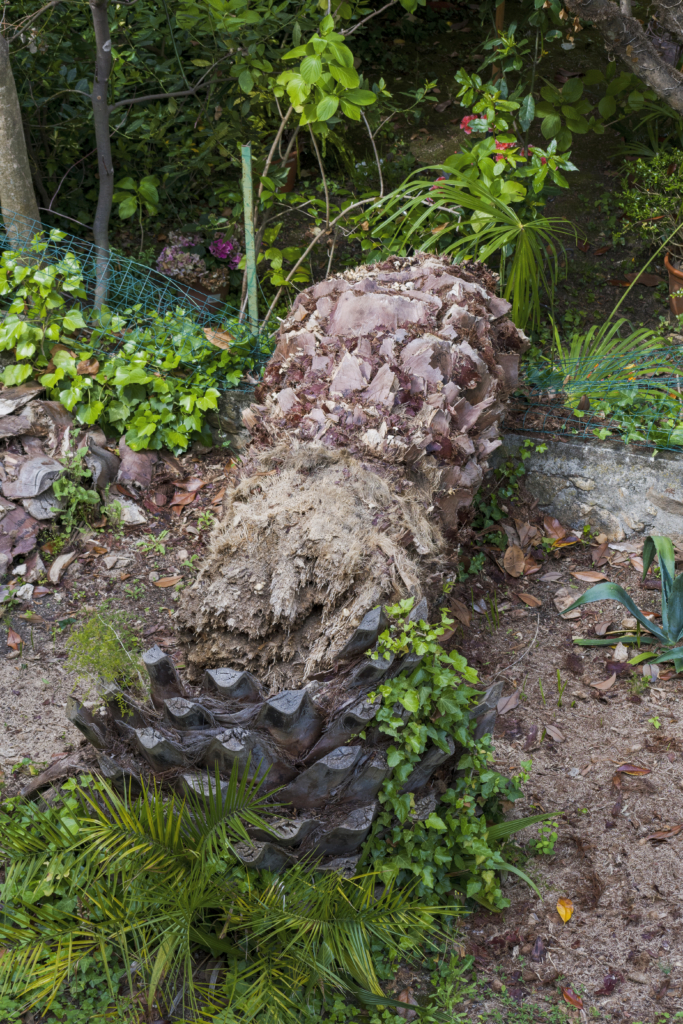 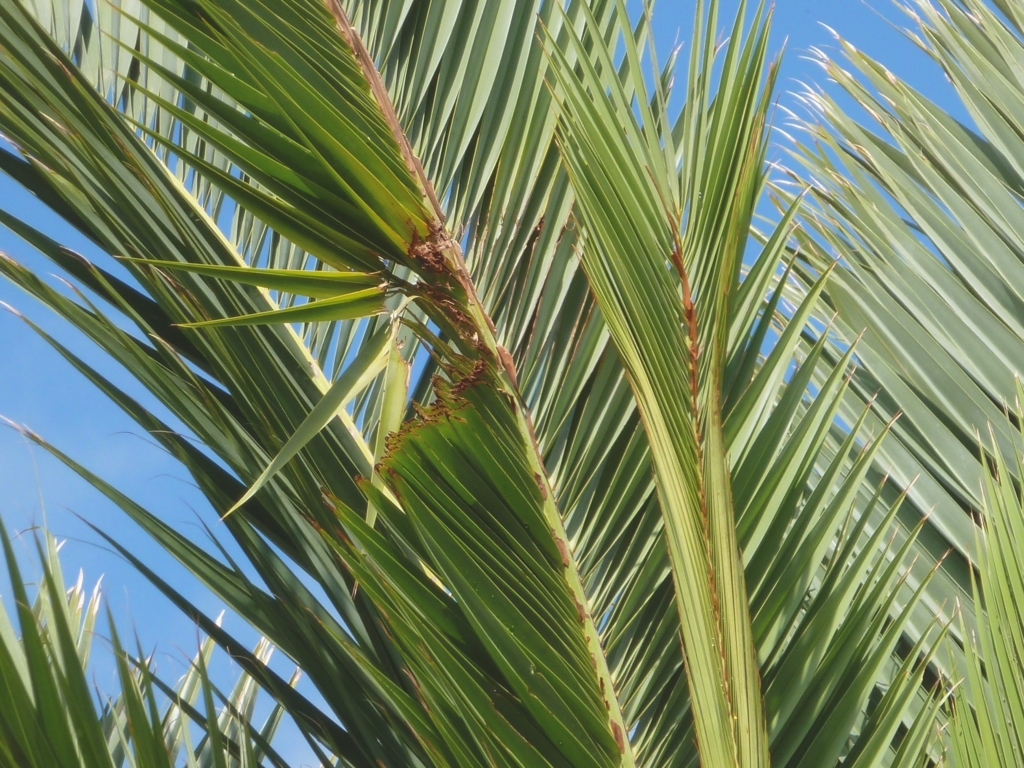 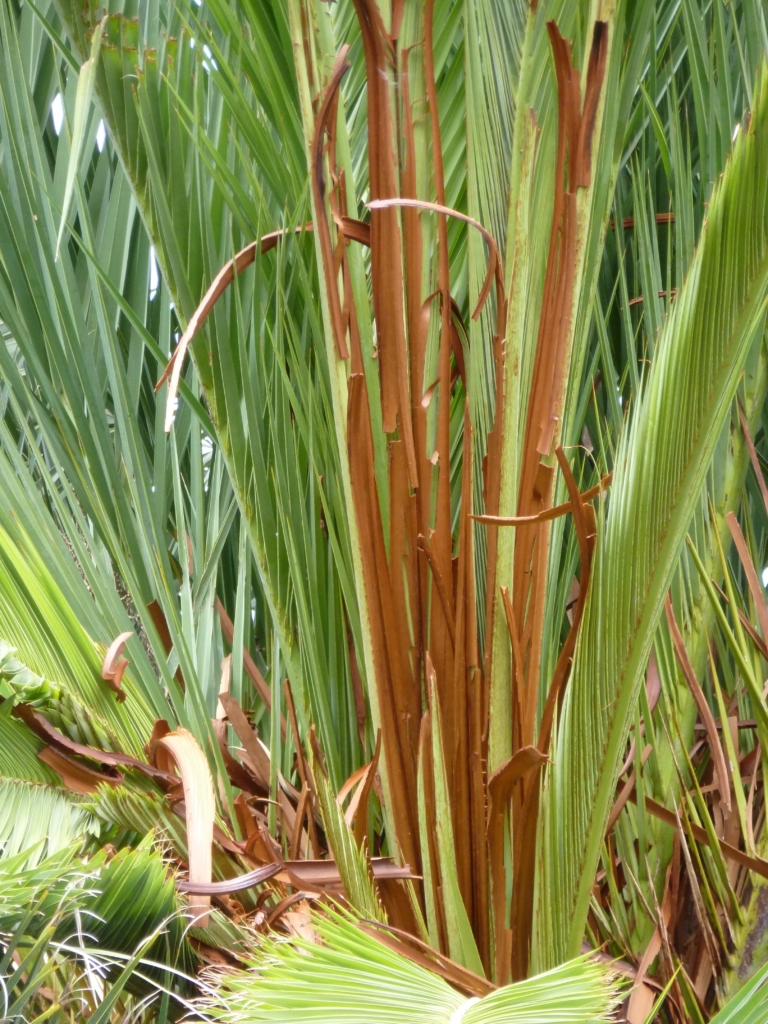 ONCE INFESTED, IS THERE A CURE?

No, but you can wage permanent war.

If all is lost, palms should be felled – ideally over winter, before the next generation of adults emerges. It should be done by an accredited tree surgeon or gardener. Expensive? Yes, but it ensures correct disposal of the plant and any insects or larvae within it. (Sadly, all too often palm remains are dumped in the countryside, which only helps spread the pests further.)

So you’ve had your palm chopped down. You’ve done the right thing and you’re no longer spreading infestation through the neighbourhood, right? Well … Ours was cut to within a couple of centimetres of the ground. Three years later, one day in April, I took a pickaxe to the stump (as you do), and unearthed eight mature moth caterpillars feasting on the root ball. 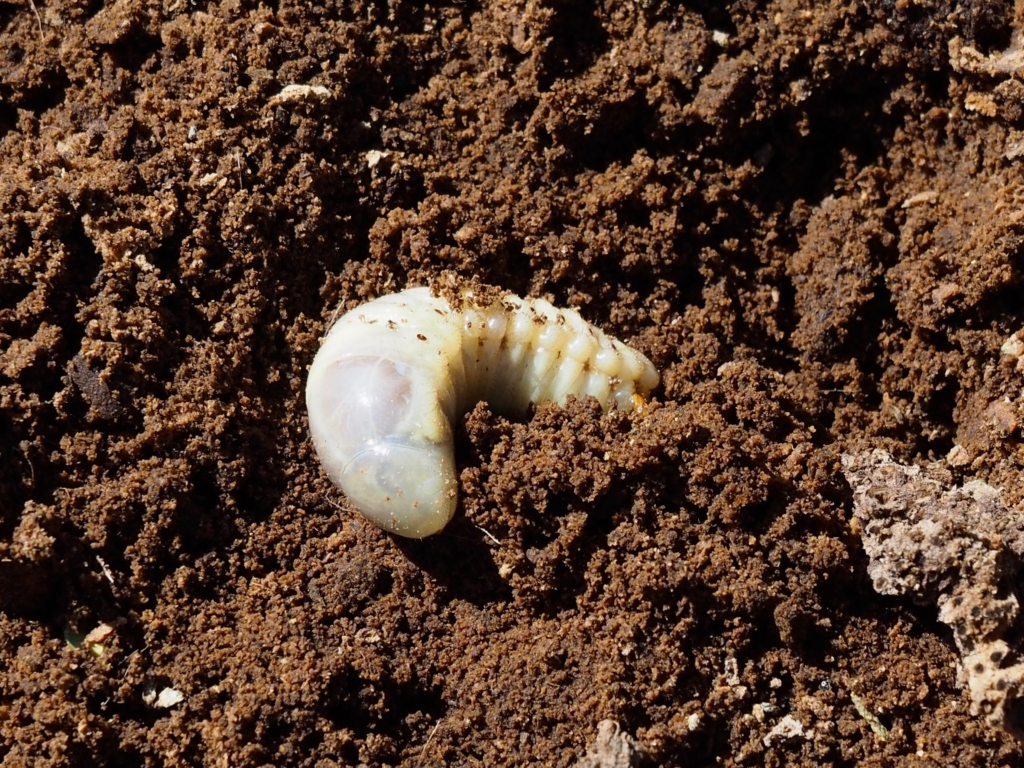 They hadn’t been there all the time – it means the moths lay eggs on stumps!

Here’s a link to a short video of the grub in action. And you can watch a palm moth laying eggs, here.

Lesley is one of the “Warblers” – a small group of natural history enthusiasts based in the P-O. Their blogs and photos can be found at Mediterranean Pyrenees

All photos in this article are by The Warblers, unless otherwise stated.