‘The Pyrenees which anciently divide the Gauls from the Spains shall henceforth be the division of the two said kingdoms.’
Article 42 of the Treaty of the Pyrenees, signed November 7th 1659

Regular demonstrations in Perpignan of various Catalan independence movements prove that there are still  activists who have not come to terms with the Treaty of the Pyrenees, signed 350 years ago! As Languedoc-Roussillon changes its name to L’Occitanie, the Catalans feel more and more disregarded. Basil Howitt tells us how  France acquired the Catalan province of the Roussillon

The Treaty of the Pyrenees ended 24 years of violent warfare between France and Spain.

It was negotiated and signed on neutral territory on the Island of Pheasants in the Bidassoa river near Bayonne. 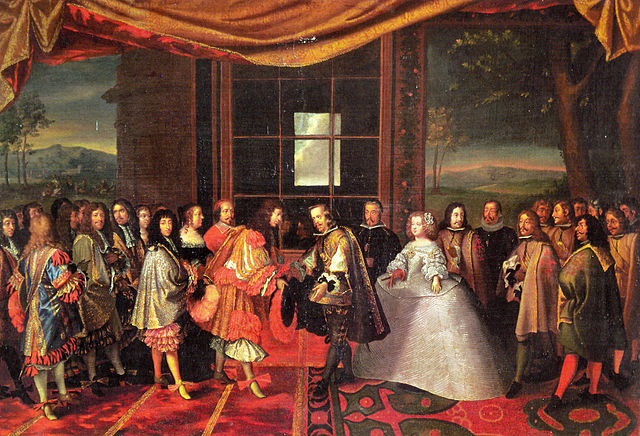 In a long, cumbersome sentence, the Cardinal described the preparations for the treaty in a letter dated 5th August to France’s War Minister, Le Tellier: 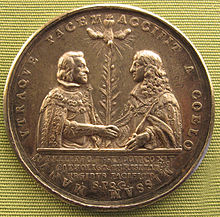 ‘Without further delay we had bridges built to link each side of our island [with the mainland], and plan to build equal lodgings, and a large room at the head of the island equidistant from the two lodgings, in which there will be two doors, one on his side and one on mine, by which we can enter, each holding rank in the chairs which will be prepared for us on each side of the room, which we will take care to build and to furnish, each one his own half. ‘

On the following June 7th, the 21-year-old Spanish infanta Maria Teresa (soon to become Marie-Thérèse) was presented to her double first cousin and husband-to-be Louis XIV, then also 21.

It was a happy bonus that they clearly fancied each other, since the marriage was an arranged one to cement the peace treaty – which incidentally covered other territorial settlements in addition to the ones detailed here.

Such was the bankruptcy of the Spanish court after decades of war that the agreed dowry of 500,000 ecus would never be paid.

We are told that after the wedding on 9th June, in the church of Saint Jean-Baptiste in St Jean-de-Luz, Louis XIV “wanted to consummate the marriage as quickly as possible”.

Not only that! He ordered the Grand Maréchal du Logis that “the Queen and himself were never to be set apart, no matter how small the house in which they might be lodging”. At all times he wished to enjoy “the legitimate passion that his wife felt for him”.

Alas, the King’s conjugal fidelity lasted only a year before he took his first mistress,

Marie-Thérèse consoled herself with hot chocolate and her circle of dwarfs.

The territorial carve-up signed on 7th November 1659 was imprecise, and only more accurately defined the following year.

France acquired the Catalan province of the Roussillon, whose most northerly military outpost had been the magnificent Moorish fortress of Salses, a few miles north of Perpignan.

Also transferred to France were the Catalan territories of the Vallespir, the Conflent, the Capcir, the valley of Le Carol, and 33 northern villages of the Cerdanya/Cerdagne straddling the Pyrenean chain.

This area especially had been the scenario for more than a dozen raids and pillagings by the French during the reigns of Francis I and Henry IV (1515-1610).

Llivia was excluded from the negotiations, reportedly because it was considered to be a town rather than a village. To this day, it remains a Spanish enclave surrounded by France.

Between 1854 and 1868, 602 boundary stones, officially sanctioned by the Treaties of Bayonne and numbered from west to east, were placed along the border. Many are still there.

In spite of losing so much territory, the Catalans had been excluded from all the negotiations, only becoming aware of the main Treaty three months after it had been signed. Catalonia had been a county within the Spanish kingdom of Aragon, with its own laws, currency, fiscal administration and customs barriers, and ruled by the Counts of Barcelona. For the northern part, this autonomy had now ended.

Obviously the Catalans north of the new border were not best pleased with the Treaty, not least because of Louis XIV’s explicit revulsion for what he called their “repugnant” language. Moreover, unpopular laws were brought in. The re-imposition of the salt tax in the Vallespir caused revolts and according to folklore, there were uprisings by guerrilla groups such as Els Angelets de la Terra. However, such rebellions were no more than sporadic, and French rule was rigorously imposed.

More permissive attitudes to Catalan identity and culture emerged in the 20th century, as you can read here. For example, limited use of Catalan in schools was allowed from 1951 onwards. The first of several Catalan-speaking Bressola schools appeared in 1978 and in the 1990s villages and towns were named in both French and Catalan.

In 2007 the P.-O.’s Conseil Général formally recognised Catalan as a valid language in the Département.

Such concessions have not been nearly enough for a core of contemporary Catalan diehards. The only group which has a political voice (just one) in Perpignan’s Conseil Municipal is the CDC or Catalan Democratic Convergence party led by Jordi Vera.

Although he seems to be a very nice, gentle man, he has exasperated fellow conseillers by addressing them in Catalan! His party’s manifesto is coherent and clear enough, though its core demand is surely wishful thinking: that French Catalonia or the Roussillon be granted the status of a Région in its own right within France – as opposed to being part of the Languedoc-Roussillon (capital Montpellier) as it is now.

Apart from anything else, we must bear in mind that according to a survey taken in 1998, nearly half of the population here can neither speak nor understand the Catalan language.

The manifesto of another movement, Unitat Catalana, comes over as a little vague, to say the least. It ends: We no longer wish to be considered by France as a little département with nothing more than tourism to its name. We wish to be recognised as a territory where Catalan is spoken with a proper identity, which is not just the colours of the rugby clubs but the blood that flows in our veins.