WITH TED AND KATE HISCOCK

This bracing walk takes in the marina, the commercial port and then on out beyond the headland overlooking the harbour wall lighthouse ‘Feu de Mole’ (dating from 1848) and then through the wild garrigue of the massive Cap Bear, crowned ignominiously by the stark Chateau D’If-like shadow of Fort Bear.

The terrain initially is by the small single-track country road that leads out to a smattering of residences and a lookout post and lighthouse at the point of Cap Bear. 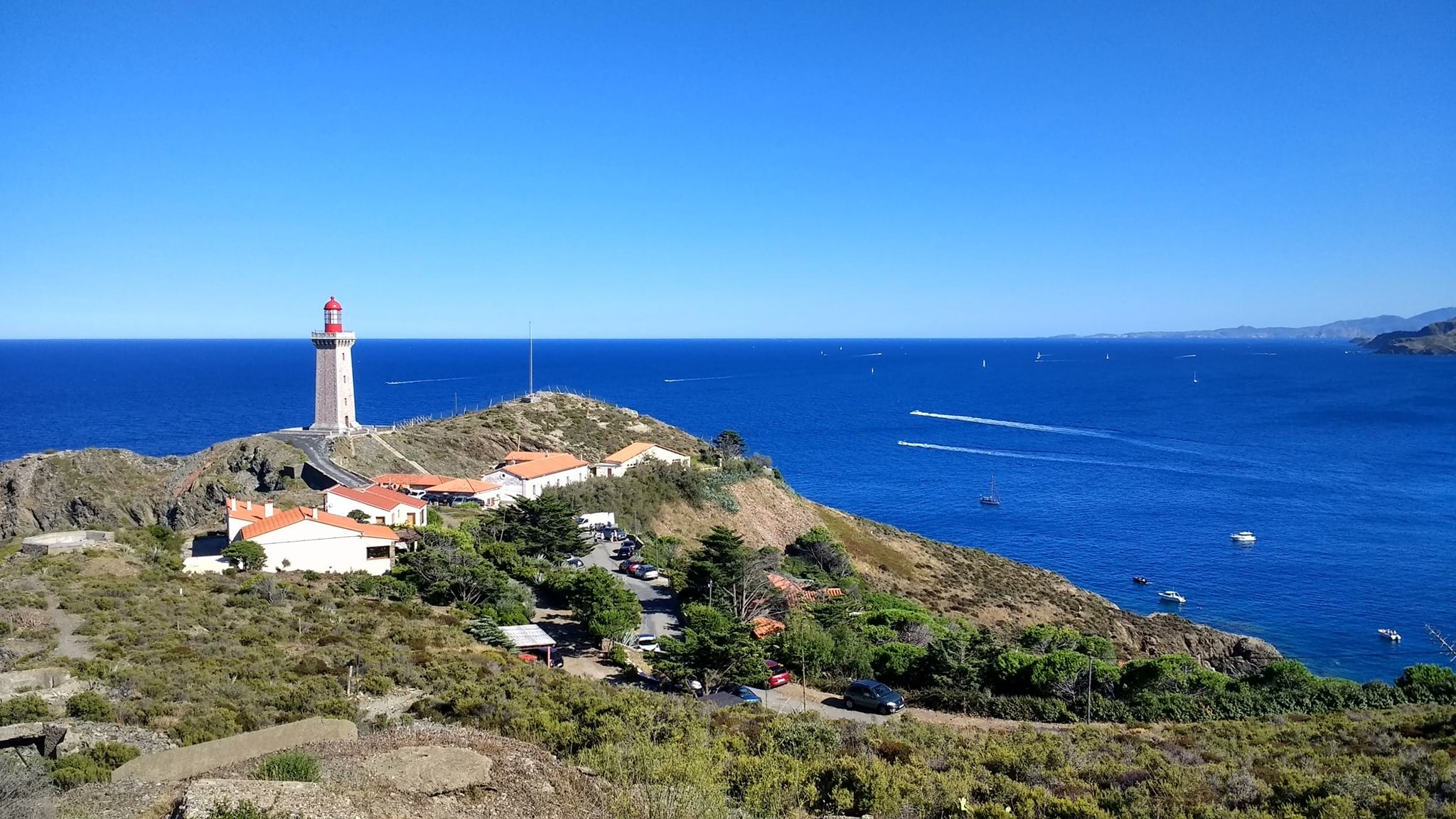 It is suggested that the return journey is by the clearly marked yellow flash foot path, which is more rugged and in one or two places a little hair-raising.

Where the path hangs on to the rock edge, an alternative safe route is suggested  in high winds and for the faint-hearted!

Once the harbour has been left behind, the magic of this walk is the sheer beauty of the natural habitat with its multitude of succulents, rock flora and bird life, including black robins, blue crows, blue rock thrush, grey swifts and Sardinian warblers, to name but a few!

From La Place de l’Obelisque, drop down to the harbour and walk along Quai Pierre Forgas  past the fishing fleet and moored yachts in the marina and round the  Quai de la Douane Republique to the side of the Commercial Port.

Sadly, this drab 20th century construction is a replacement of the one destroyed in 1944 by the retreating German army who felt it necessary to sack everything on its departure.

Having hugged the perimeter fence at the back of the Port du Commerce, take the left fork (Avenue du General Leclerc) heading back towards the harbour shore and along Route de la Jeté where the road follows the rocky shore past the Anse des Tamorins and then immediately before the tunnel take the road going up the hill on the right; Chemin du Cap Bear.

As the road winds up, quickly coming into view is one of the original sea defences of Port Vendres, the Redoute Bear on the left standing proudly on a promontory overlooking the bay.

This museum built in the 18th century, houses exhibits from the history of Algeria and a memorial to Sidi Ferruch.

As the road winds along the rocky hill, a ruined fortress comes into view just in front and below (Fort Mailly), another of the defences of the town.

Visible from all around and crowning the massive hill of Cap Bear at 200m is the Fort Bear dating from 1895 and still a serious military installation used by the French Army today.

The Chemin du Cap Bear twists steadily around the perimeter of Cap Bear and offers stunning views back over Port Vendres to Pic Canigou and the Corbières in the distance.

Also from here the twin Tours de Madeloc and Massane sit on the immediate skyline, and the craggy coastline is dominated by the two lighthouses of the Feu de Mole (1869) at the end of the Jetee on the near side and Vauban’s Fort Fanal (1700) on the opposite side of the harbour mouth.

At a number of points along this road Charles Rennie Macintosh painted local scenes which are displayed at each vantage point.

The road runs around a headland as Port Vendres disappears but very soon the Semaphor (1895) and Phare de Bear (1902) come into view.

Along this route,  there are occasional yellow flashes painted on the rocks; these are the suggested signs to follow for the return journey.

Immediately before the locked gates of the Phare on the right side of the road are stone steps leading down to a tiny secluded creek.

The lower part of this path is rugged and care must be taken, but the effort is well worth while for at the bottom is Anse Ste. Catherine’; a tiny beach with a dozen fisherman’s cottages huddled around it – totally inaccessible by road.

This track down is the suggested alternative route for accessing the coastal path on windy days and when at the bottom, the Anse Ste. Catherine is a perfect sanctuary away from the motor car and bustle of modern life.

From the headland above Anse Ste. Catherine, views along the coast to Paulilles, Banyuls-sur-Mer and beyond are breath-taking.

To return, on windy days it is best to come back up the same downward track, but when the weather is calm, the path that goes east is well worth the effort – with care!

The well made steep steps up to the Phare are precipitously close to the cliff edge but the colours of the vegetation and scenery are spectacular and take the concentration off the drop to the rocks below.

The Phare is constructed of granite and pink marble which is carried into its interior with a spiral staircase made of the same polished pink stone. 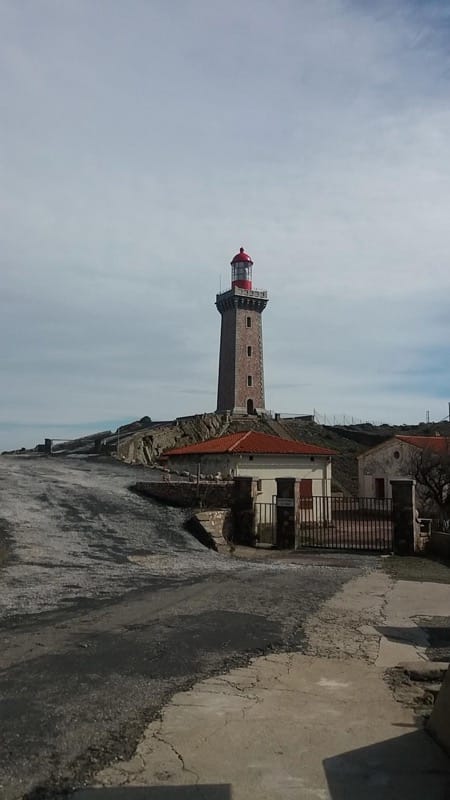 The final half kilometre out to the easterly point of Cap Bear is dominated by large relics of German occupation from 1942-44, when the headlands of this coast were heavily defended against potential Allied invasions.

Curiously, these concrete monstrosities have been left like earthquake ruins for all to see, in a site of special national ecological importance.

After the Phare, take the road back to where the steps lead down to Anse Ste. Catherine and in about 100m, follow a yellow flash on at rock on the right which goes away from the road and to a separate well-maintained foot path, passing close to the Semaphor and beyond. 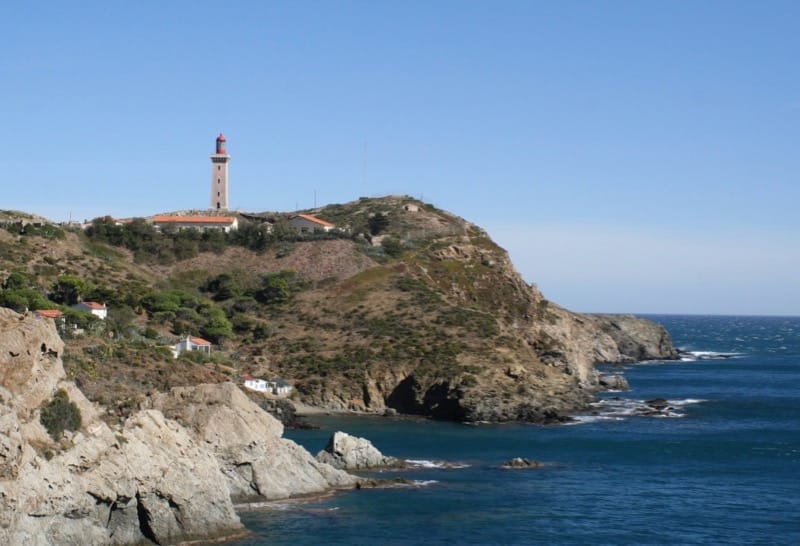 This path crosses the Chemin du Cap Bear a couple of times and rarely leaves the proximity of the road for long and is clearly marked with yellow flashes (and crosses, where not to go!).

Finally the rugged path drops down some steep steps to the Anse de la Jetee (or de l’Aspulgas) with clear views back across the mouth of the harbour and up the coast of Roussillon from the Jetée.

The path back to Port Vendres follows the road along the bay but periodically veers out over rocky promontories before rejoining the road around the Port de Commerce.