with Leigh and Merry Foster

This is a very pretty circular walk above the charming Albères village of Montesquieu, which anyone interested in the flora of this delightful region should enjoy. It follows a well-marked trail with some lovely views from Canigou to the coast. It is about 6km long and takes about 2 hours. Some of the climbs are a bit steep and overall it is a medium level walk, so good boots and sticks are recommended.

♣ Start from the car park next to the Post Office in the village on the main road (490150m E, 4707250m N, 166m alt). Walk north through the village on the ironically named “Grand’Rue”, past the font in the place de l’Houm – one of several on the trail, restored by the local association. Follow the right-hand bend signposted D11 to Villelongue and then take the first turning on the right, up Chemin Saint Cristophe. After 100 metres or so you leave the road behind and head off into the woods. 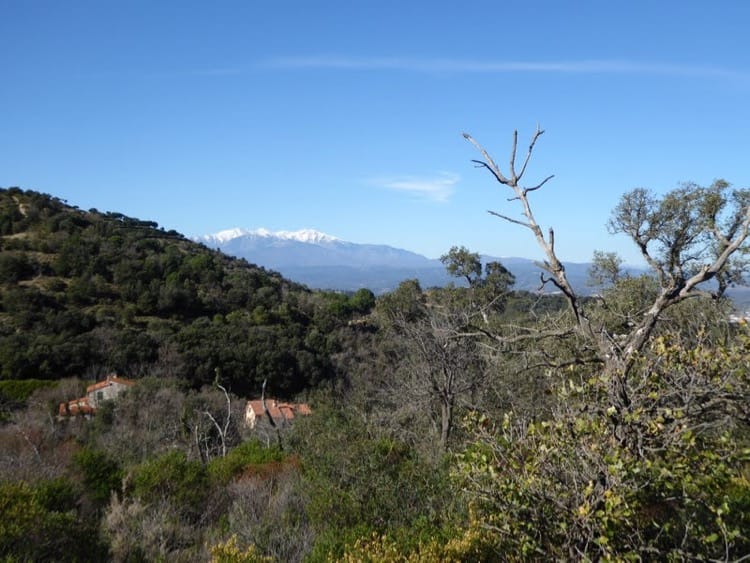 ♣ The path climbs some steep steps through the trees, and many of the plants and bushes on either side are labelled with their common and scientific names. We found a few non-native species that must have been planted by some botanical enthusiasts (Eucalyptus, anyone?), so it’s an interesting trail. Quickly the views behind you become very pretty, looking down on the little village below.

♣ The trail continues to wind southwards up the hillside, following a shallow dell until you come to a ridge at 490270m E 4706700m N. This overlooks a bowl-shaped hidden valley with a couple of stone Mas tucked away on the far side, surrounded by neat pasture and orchards, and with the magnificent snow-capped (in spring) Canigou as a backdrop. Follow the trail up, keeping the hillside on your left. Keep going through the trees, following the yellow markers, up some quite steep climbs in places. Eventually the trail emerges onto a piste at 490498m E 4706196m N at 345m altitude. From here you can see all the way back down the valley to the plain below, and the hills of the Corbieres to the north. 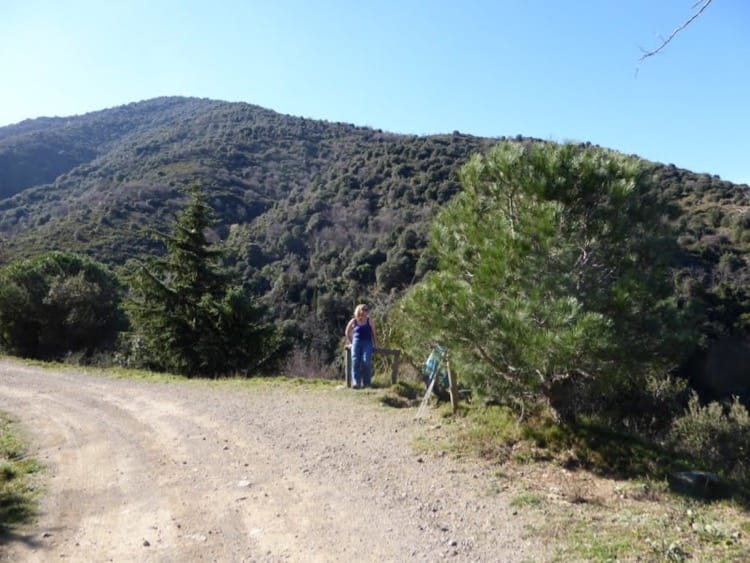 ♣ We did see quite a few pine processionary caterpillar nests in the trees near here, so dog owners should be aware, although by the time this walk is published, they should hopefully have all disappeared.

♣ Turn right and continue on the piste to the south, to where it crosses the little Correc de Sant Cristau.  Here there is another little font (the “Ravelade”) by a pretty waterfall, and a picnic table. You can actually turn off the track here and walk all the way up to the Col de Llinas and even to the Puig de Sant Cristau. We stayed on the easy piste however, and wound our way westwards, along the opposite side of the valley from where we had come. Around each bend you are treated to a larger panorama. More of the coast to the east, and mountains to the west are gradually revealed, and the plain spreads out below, with villages like scattered toys on a green- and brown-mottled carpet. 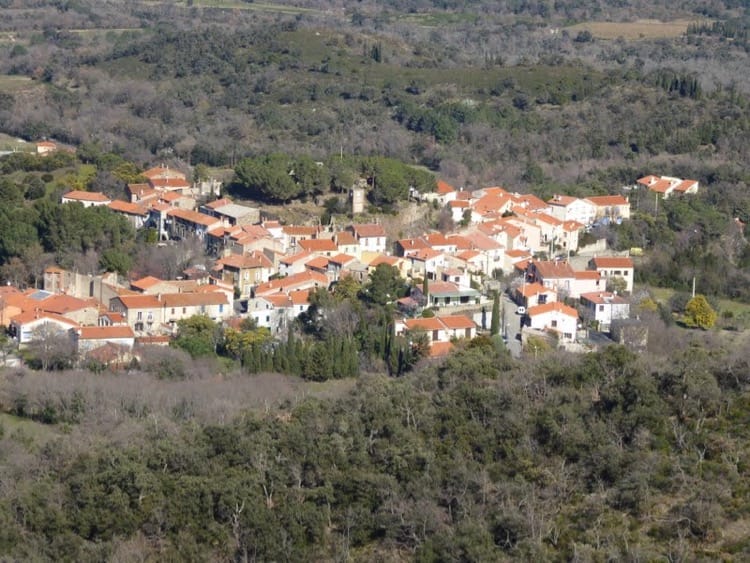 ♣ After about 1km, at 489870m E 4706400m N a narrow footpath to the right drops steeply down into the valley, cutting a corner off part of the trail (not advisable without a stick). If you prefer your walking easier, however, stay on the piste for about another 1.5km. At the picnic area below the hillside of Treize Vents, follow the track downhill (to the right) and, just before Mas Pericot below the Chartreuses du Boulou, turn right again, onto the lane that heads northeast, back towards the village. Descend Rue des Albères, finally turning right at the T-junction and crossing the river once more before regaining the main road, just below your start point. 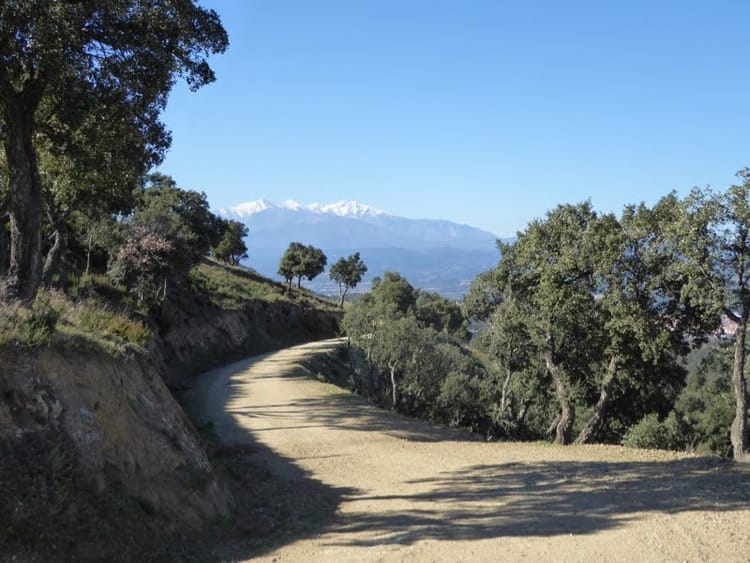 And to make this walk into a great day out, why not visit nearby vineyard Mas Rous on the road heading back out of Monstesquieu towards the voie rapide.  Michel Bizern produced fortified wine and olives and was known as Miquelo Ros (Michel the blonde) due to his mop of blond hair. When he built his house on the land in 1850, the villagers called it ‘El Mas del Ros’ which evolved over time and language into ‘Rous’. Today, his great grandson, José Pujol, carries on the tradition, with eleven different wines on offer in this cool wine cellar and tasting room.

Or wander around the  tiny village which  boasts a 12th century Romanesque church with  ornate oak and metalwork door and ancient bell tower, the ruins of an 11th century medieval castle, destroyed by King Louis XI in 1475, and a small museum of private collections and objects, recording the history of the village.