Our friend Jo had done the unthinkable. She had organised her own death, which was to take place in Switzerland at the offices of Dignitas. She’d asked Arthur if he wanted in on the ticket. “I can negotiate two for the price of one?” she said, referring to her days as a buyer.

But, despite his own illness and difficulties, Arthur wasn’t tempted. The journey there was undertaken in Jo and Arthur’s car. An old cabbie friend drove and Jo’s nurse accompanied them. Arthur returned alone from Switzerland, shell-shocked and visibly more ill than when he’d set off with Jo, and over the following few months this sad process continued.

Being mid summer, hubby and I were camping in our little woodland when there was a rustling in the bushes. Hubby looked up from the crossword we’d been attempting. Arthur emerged from the undergrowth, clutching an armful of magnum ice creams and two bottles of beer. Before we could help, he slipped and tumbled head over heels down the steep track that led to the yurt, and landed at our feet. Arthur had been a goalie in his youth and knew how to fall and so, luckily, he was unharmed. Even so, we were all worried about him living alone. Arthur couldn’t remember when to take his pills and, owing to his belief that the nurse wanted to steal them, had the habit of stashing them away in little caches all over the house. 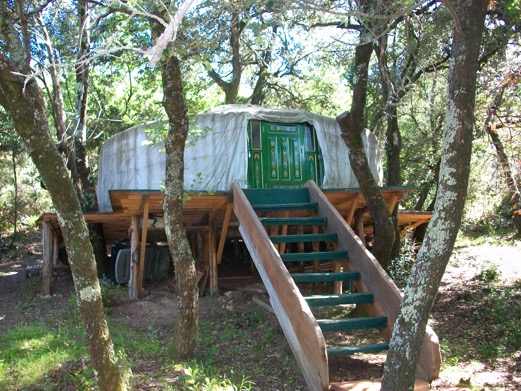 Hubby had called around one day to find Arthur standing on a chair holding what looked like his belt in one hand.

“Don’t do it!” hubby shouted. But Arthur had been busy hiding his pills on the top of a tall cupboard where the nurse wouldn’t be able to find them. Hubby suggested that Arthur store the pills in a more accessible location and then, as arranged, brought him over to our house for dinner. As soon as he arrived, Arthur exclaimed in horror that he’d forgotten to bring his pills with him. Back they went. “I’ve lost them, I don’t know where they are,” Arthur said.

Eventually, Arthur agreed to go in a local clinic for a few days for tests to be done. We visited him there and found him hardly conscious, drugged to the eyeballs, in bed. “Nobody who goes in a French mental institution is ever seen again,” someone said darkly. A rescue plan was needed and the matter was discussed with neighbours and friends, who all agreed that it was imperative that Arthur return to the UK before the French medical service managed to really get him in their clutches.

While living in the yurt we took the opportunity to indulge our passion for watching the birds. We had hoopoes nesting in a tree nearby, hawfinches, woodpeckers and even a Golden Oreole. The latter’s liquid song could often be heard but this elusive bird was rarely seen, apart from the occasional flash of yellow as it flew from tree to tree. Early in the mornings we could hear the raw throaty roar of deer and spotted hares as they lolloped lazily through our meadow. 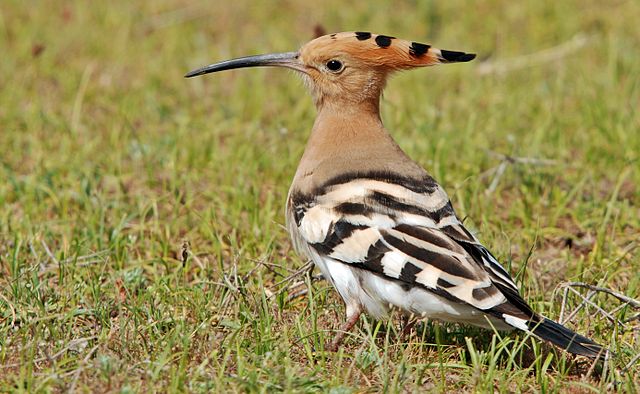 During these hot summer weeks we grew quite used to taking une douche under the shower head that hubby had rigged up. He had no qualms about this, even though the shower was visible from the track that led from the house to the woodland but I was more circumspect. After some nagging he did erect some rather feeble bamboo fencing along one side but I was still a little nervous that I would be spotted. After a while though, you tend to care less about such things and soon I was showering with abandon — that is, as far as it’s possible to shower with abandon under cold water.

I was taking a shower when I heard Gyp the dog growling. It was unusual for Gyp to growl or bark and I noticed he was peering towards the road that runs a few metres below our straw bale hut. Wrapping a towel around myself I took a look. Below us was what looked like the turret of an army tank, and protruding through a hole in this was the largest telephoto lens I’ve ever seen.

As I watched, the tank turret shuffled along the grass verge and the lens swung in my direction. I wondered who it could be and why they were so interested in our daily activities but it turned out that there was a hoopoe nest in the adjoining tree. 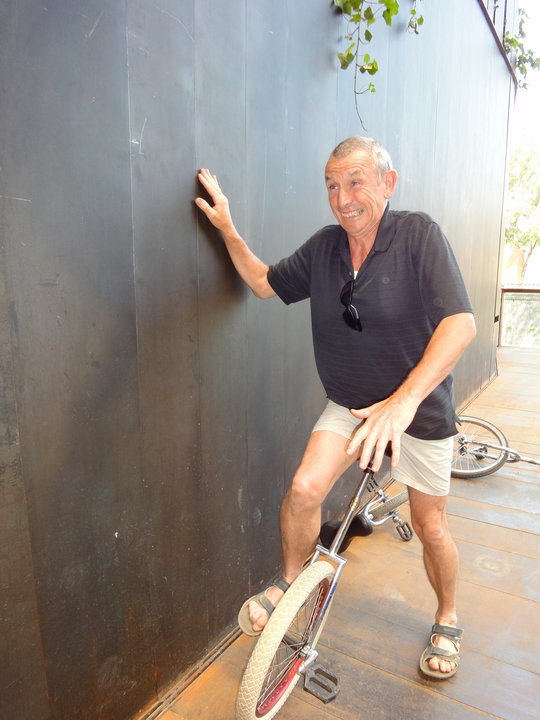 We took the opportunity one summer’s day, to visit Bezerkas Circus over the border in Spain. Our friend Shaun had decamped from the UK several years earlier and was living and working in Ripoll, a quaint town in the Spanish Pyrenees, where he’d brightened up life by putting on circus shows and demonstrations. We recruited some friends from Ceret and drove over. Hubby had a go on the unicycle but just couldn’t get the hang of it and decided that unicycling was just one of those activities, like skiing, that would be relegated to the ‘done that, will never do again’ category. In contrast, Dave Corrance proved to be a natural.

Arthur was duly rescued from the prison camp — err, I mean hospital — where he’d been incarcerated and finally agreed to return to the UK, where a care home was found for him. A chapter of our lives was over. We would miss his arrival mid-morning, carrying an armful of magnum ice-creams, hearing the bat-mobile whizzing past, his jokes and anecdotes about life as a London cabbie. But most of all, we would just miss…Arthur.