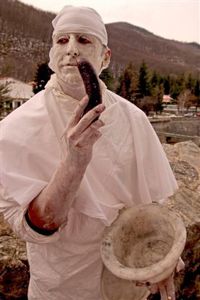 Find out more about the tradition of the Bear Festival

It’s probably been a while since Arles sur Tech and the word ‘jewel’ have appeared in the same sentence but I think this is changing and we can’t keep the brilliance of Le Bahia to ourselves any longer!

A little jewel in Arles sur Tech, this restaurant/bar/mini-golf venue has been taken over by Guy Travé and his lovely wife Rapha, who had previously run Las Conques very successfully in the Haut Vallespir above La Preste.

The popular mini-golf course remains but the reputation of Le Bahia is now growing in leaps and bounds due to its delicious, freshly cooked food,  the warmth of the welcome and the view from the terrace looking down on Arles, across to the Canigou range and right along the valley towards Prats de Mollo!

The traditional menu changes regularly, and although not extensive, the choices are creative, varied and well planned and everything on your plate will have been locally sourced and produced and freshly cooked to order.

Expect to pay around €30 for three courses, €24 for the two-course Formule, or around €14 to €18 for one of the four choices of ‘mains’, which will include a fish dish as well as mouth-wateringly tender beef or lamb or even an authentic steak tartare, all served with imaginative and tasty vegetables fresh from the grower.

There is never any pressure to go the whole hog with three courses if your appetite or budget is small and over several visits we’ve never been disappointed in a meal. They will also provide a delicious and good value vegetarian option, but remember to mention this when you book.

Clearly sign-posted from the bridge on the main road into Arles from Amelie – Le Bahia, Route de la Baillie, 66150 Arles-sur-Tech.

Open every day, except Tuesday, for lunch and dinner and for drinks and mini-golf from late morning all through the afternoon. Closed throughout January. Reservations on 0468 878701.