There’s light at the end of the tunnel! Prime Minister, Eduoard Philippe, yesterday revealed the government’s plan for easing us back in to a certain level of normality, albeit much altered from what we knew before.

Here’s a break down of what he had to say:

The start of déconfinement is provisionally set to begin on Monday 11th May although  this is dependant on how the figures evolve between then and now. The date will be pushed back if there are still more than 3000 new cases each day.

If the number of new cases is below 3000 a day, relaxing of confinement measures will be allowed although all residents are strongly encouraged to remain vigilant and keep movement to a minimum.

Déconfinement will be staggered, with departments attributed a Covid 19 status. Green will mean déconfinement can begin, whereas red, will mean measures take a stricter form. Attribution of green/red status will be based on certain criteria, studied on 7th May, to determine whether “the spread of the virus remains active”, “hospital resuscitation capacities remain stretched” and/or “the local system of testing and detection may not be ready”, the Prime Minister said.

“Protéger, tester, isoler” (protect, test, isolate) is the government line heading towards déconfinement and starting on the 11th May, Eduoard Philippe envisions 700 000 tests per week, conducted by “brigades” in each department. Those who test positive will be invited to self-isolate, either at home, which will result in the confinement of the entire household for 14 days, or in a place made available, including requisitioned hotels.

The Prime Minister said that although it is preferable to wear masks when out in public, they will only be compulsory on public transport and in schools. He promised that from the 11th May, there will be enough masks to meet demand, slowly moving towards a sustainable situation whereby the general public will be able to buy masks in shops with no risk of shortages. Nevertheless, he invited employers to ensure they provided masks to their employees and encouraged people to make their own masks where possible.

The timetable for returning to school is as follows:

Masks will be compulsory for early childhood professionals and secondary school students. They are forbidden for children under 3 years old, and advised against fro primary school children, for safety reasons.

Working from home is still strongly recommended for anyone who is able to in a bid to limit movement and contact between people.

All shops, with the exception of cafés and restaurants, will be able to reopen from 11th May, but with strict health protection measures in place. This includes the recommended wearing of masks for both staff and customers if distancing is impractical. It is important to note that businesses will be able to refuse entry, at their discretion, to customers not wearing masks.

Departmental representatives will make the decisions as to whether shopping centres of more than 40,000 m² are allowed to open.

For cafés and restaurants, the provisional date of 2nd June will be debated by the government at the end of May.

Major museums, cinemas, concert venues and theatres will remain closed until further notice however libraries and small museums will be able to reopen after 11th May.

Any public gathering of over 5000 people is forbidden until September at the earliest. Public and private gatherings will be limited to a maximum of 10 people, religious ceremonies to a maximum of 20 people and municipalities are invited to postpone weddings.

What about our beautiful beaches, we hear you cry! Bad news! They will remain closed until at least 1st June. Parks and public gardens will only be open in departments where the virus is not actively circulating.

Although public transport will run, it will be at a drastically reduced level given that the government wants to limit movement and contact as far as possible.

Inter-departmental or inter-regional travel will be limited to imperative professional or family reasons only and as such all train tickets will need to be reserved in advance.

Local travel will not require the attestation de déplacement currently required but any journey over 100km will need to be proved to be for compelling professional or family reasons.

The controversial StopCovid mobile data tracking project has been sparking fierce debate over privacy and data protection issues; a debate that Eduoard Philippe says is “premature” because the technology is not yet ready. Once the application has been fine tuned, the government will debate and vote on its implementation.

After this initial phase of déconfinement on 11th May, reviews will take place on a three week cycle (the next date set for 2nd June), with new adaptations and changes to measures that will depend on the level of the epidemic 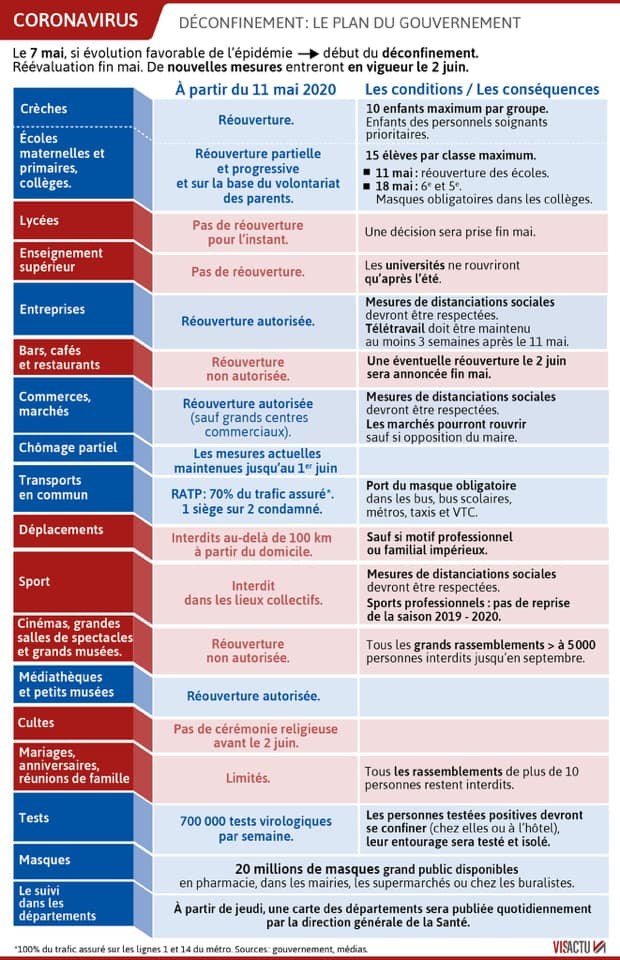