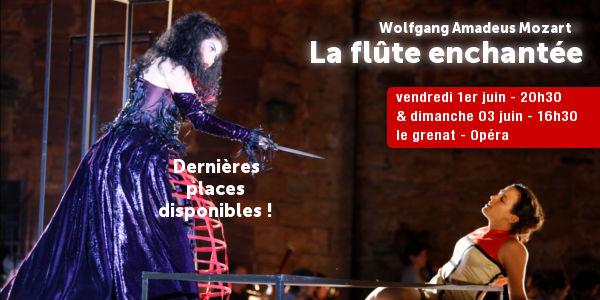 The Magic Flute (Die Zauberflöte) was composed by Wolfgang Amadeus Mozart in 1791, the year in which the composer died. The libretto was written by Emmanuel Schikaneder, who also played Papageno in the opera’s premiere.

The story is really a fairy tale for both children and adults, full of Masonic symbolism,  its music ranging from simple, folk-like tunes such as Papageno’s “Ein Vogelfänger bin ich ja” to the raging virtuosity of the Queen of the Night’s “Der Hölle Rache.”

The Magic Flute tells of the adventures of Prince Tamino who, accompanied by the bird catcher Papageno, rescues Pamina, daughter of the Queen of the Night, who has been kidnapped by the wizard Sarastro.

When the frightened prince is rescued from a serpent, he falls in love with the portrait of the queen’s daughter, Pamina,  enslaved by the evil Sarastro.

The queen’s ladies give Tamino a magic flute to Tamino (and silver bells to Papageno) to ensure their safety, appointing three spirits to guide them. He is then put through a series of trials
Pamina, in the meantime, catches a glimpse of Tamimo, and is enchanted by him

After many dangers, and the discovery that the queen of the night is actually a baddy, whilst the wicked wizard is really a goody, Pamina and Tamino are reunited and face the ordeals of water and fire protected by the magic flute. Tout est bien qui finit bien!