With summer just around the corner, the region’s iconic liittle yellow train is back in action, trundling visitors up and down the mountain between the Conflent and Cerdagne.

Last week (16-21 May), was set aside for track works with ballasting done during the night. Now that the track is open to passengers, almost daily maintenance work will be conducted to keep the train safe and enjoyable for all.

Made up of wooden compartments painted in the Catalan colours of ‘sang et or’ (blood red and gold), le petit train jaune was built at the beginning of the century in order to link the towns and villages high up in the mountains with Perpignan and Prades, the principal administrative towns. It links Villefranche-de-Conflent with La Tour de Carol, a track running 63 km.

It is the highest railway track in France with the highest SNCF station and the views are stunning as you pass over the viaducts; Séjourné (named after the chap who built it) and the Pont Gisclard, built 80m high overlooking a precipice.

Visit Dorres between Bourg Madame and Envieg (take the D618 then the D10  to Dorres) to see a granite stone cutters museum, showing how the granite was cut for use in the tracks of the Train Jaune, the Barrage of Bouillouses, and the Basilique of Lourdes.

The train’s braking system is unique in the world, being the first train to have used electricity. These “aéro-statiques” brakes use electrical current and stop the train by electro-magnetism: the heat created by this friction is dissipated by enormous elements underneath the machine, which are cooled by air.

The brakes of course are pretty  important as the downward run is particularly steep between Ollette and Saillagouse. Despite the steepness of the return journey, there has never been an accident, apart from the day of the train’s first trial run in 1909! Ooops! 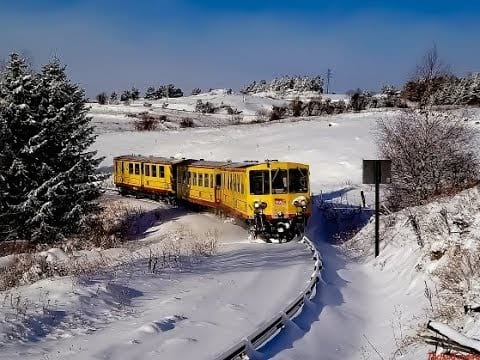 The line nevertheless went on to be opened safely in 1910 from Villefranche to Mont-Louis, progressing in 1911 to Bourg Madame, but not arriving in Latour until 1927.

The petit train jaune faced uncertain times back in 2016, when it was struck by financial troubles and significant track damage. Fortunately for the region, the line was saved and the emblematic yellow carriages continue to climb and descend the beautiful Pyrénées.

The line is a single track and the trains can only pass each other at certains stations (Olette, Fontpédrouse, Mont-Louis, Odeillo, Saillagouse, Bourg-Madame) so the driver has to check by radio with the control centre in Villefranche and obtain permission to leave each station!

The line leaves Villefranche-de-Conflent, goes up through the Tet gorges to Mont Louis and crosses over the col de la Perche into Cerdagne. It passes Font-Romeu, descends towards Saillagouse, Osséja, Bourg-Madame, Ur, and finishes in Latour-de-Carol where passengers can link up with the “Transpyrénéen” (Paris-Toulouse-Barcelone). It goes through 19 tunnels and over 2 viaducts:

Click here for timetables and loads more info about the petit train jaune.