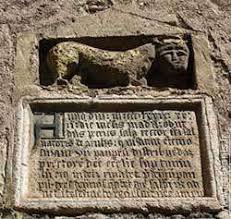 These ‘monkey men’ came down from the mountains, raping, pillaging and destroying crops.

In despair, the abbot of Arles, Arnulfe, decided that the relics of a Saint were needed to balance out the sins of the villagers, which were surely responsible for their plight.

He journeyed to Rome and returned with the relics of Abdon and Sennen, obscure Persian saints who were eaten by lions in the Arena of Rome. To prevent robbery, the relics were hidden in the false bottom of a liquor barrel, and carried on the back of a donkey.

He travelled through the Alps to the Pyrenees where, on the last leg of the journey,  the poor donkey fell from a narrow track over a cliff. All was lost.

An unhappy Arnulph returned to the village alone. As he approached, he heard the church bells ringing. There stood the donkey surrounded by the villagers, with its precious cargo!

The Simiots disappeared, peace was restored and Abdon and Sennen were acclaimed the patron saints of the abbey.

“La Sainte Tombe” in which their bones are supposedly stored, has run with pure water ever since, defying scientific explanation.

Once a year the monks siphon out the water with a silver pump and hand out to pilgrims.

WHERE TO EAT IN ARLES SUR TECH