With the Catalan counts constantly fighting each other, the end of the 10th century and the beginning of the 11th century were marked by a series of horrible crimes inflicted on a terrorised population. The church tried its best to protect a bullied and oppressed people. 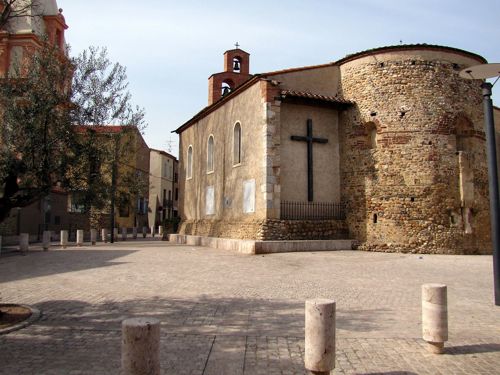 The small town of Toulouges was chosen by the church in 1027 for the signing of the ‘Truce of God’ (Treuga Dei), an attempt to limit violence in a feudal society where the smallest disputes between lords and knights, and even whole counties were regularly settled by war and violence.

Despite a law passed around 697 called the Cáin Adomnáin, which provided sanctions against the killing of ‘children, clerics, clerical students and peasants on clerical lands‘, society was pretty much lawless.

With an initial ban on fighting on Sundays and holy days, this was the first organised, non violent attempt to control society in medieval Europe.

It was also forbidden to commit any barbaric acts in houses built within 30 feet of churches or in cemeteries, leading later to the church becoming a safe centre for social activities.

Many villages grew up around the church in the eleventh and twelfth centuries, a sort of zone of immunity where violence was prohibited under the ‘Truce of God’.

The church attempted to persuade the nobles to sign  the peace treaty by threatening them with retribution from the dead saints, waving in their faces the famous ‘relics’ preserved in the churches. It used people’s superstition, fear and belief in the power of saints’ relics to gain some measure of control over the violence – but it was only a partial success. Knights and nobles would take the peace oath – then get straight back to rape and pillage once they returned home.

However it did set a precedent, and was the beginning of other, more successful initiatives movements to control nobles’ violence.