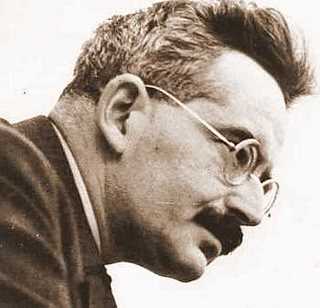 Walter Benjamin, (1892 – 1940) German-Jewish literary critic, fierce critic of Nazism and posthumously one of the twentieth century’s greatest philosophers, has a plaque dedicated to him in Banyuls-sur-Mer.

Walter left his homeland as Hitler rose to power and by 1933 was living in Paris. As the Germans swept into France he fled south, first to Marseille then to Banyuls.

There, he met Lisa Fittko, also a Jew and Hans, her Protestant husband. Their own flight from Nazi Germany in 1940 had been terrifying, landing them in separate concentration camps in occupied France. Escaping, they had also fled further and further south.

In Banyuls they had joined the local guides helping refugees to  flee along the torturous paths over the mountains into Spain to Port Bou. From Puig del Mas, the old village of Banyuls where a monument honouring the Fittkos points to the distant Col, Walter Benjamin headed over the mountains to Spain, short of breath, bad heart, a heavy smoker, carrying a large briefcase in which was the manuscript of his last book.

As you walk in his footsteps, reflect upon the courage of those who walked this path so often, helping desperate refugees to cross the border to relative safety, the bravery of the “evades”, and the cruelty that drove the refugees back and forth across the border.

For in the thirties the same route had been used in the opposite direction by Republicans fleeing Franco.

In September 1940, Walter and the Fittkos reached Port Bou, and Benjamin learned that the Spanish government had cancelled all transit visas and ordered the Spanish police to return refugees to France

Anticipating being handed over to the Nazis, and in utter despair, Benjamin took his own life. He was found dead the next day, in his room at the Hotel de Francia but it was never completely clear whether his death (apparently resulting from an overdose of morphine tablets), was suicide or murder.

Ironically, his death certificate was accidentally signed as ‘Benjamin Walter’, so his Jewish origins were not obvious and he was buried in the actual cemetery instead of the area reserved for non-Catholics and unbelievers.

Outside the town cemetery lies the Walter Benjamin memorial. A heavy metal passage containing a steep staircase sloped down to the sea breaking on the rocks below. On a pane of plate glass at the bottom of the staircase is written “It is more difficult to honour the memory of the nameless than that of the renowned. Historical construction is devoted to the memory of the nameless”